The Norwegian Elkhound is one of the ancient Northern Spitz-type breed of dog and is the National Dog of Norway. The Elkhound has served as a hunter, guardian, herder, and defender. In a land of subzero temperatures, deep snow, thick forests, and rugged mountains, only the hardiest of the breeds could evolve to perform the variety of jobs at which the Elkhound excels. Its Spitz courage is probably a by-product or residue of the fact that a significant number of them were used to track and hunt moose and other large game, like bear or wolf. The Norwegian Elkhound was first presented at a dog exhibition in Norway in 1877.

The AKC breed name "Norwegian Elkhound" is a direct translation from its original Norwegian name "Norsk Elghund," meaning "Norwegian moose dog." (European settlers mistakenly called the North American cousin of the red deer an elk, when in fact in the Norwegian language the term elk or elg means moose.) Despite its English name, it is not a hound; the Elkhound does not hunt like a hound nor is it directly related to hounds, however in Britain it is classed as a hound and in shows is grouped in the Hound group. The breed's goal in the hunt is to independently track down and hold the moose at bay — jumping in and out toward the moose, distracting its attention, while signaling to the hunters by barking very loudly — until the hunter who follows the sound can arrive to shoot it. The dog will only bark while the moose is stationary, but it can also slowly drive the moose towards shooters lying in wait. The Norwegian Elkhound is also used on a leash; in this mode of hunting the dog shows the hunter the direction to the moose, but keeps quiet. 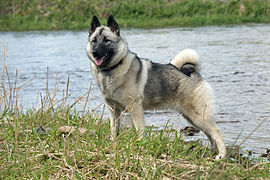 The dog stands about 45–52 cm (20.5") high and weighs up to 24 kg (52 lbs). Its grey, white, and black coat is made up of two layers: an underlying dense smooth coat ranging from black at the muzzle, ears, and tip of its tail; to silvery grey on its legs, tail, and underbody; and an overlying black-tipped protective guard coat. An ideal Elkhound has a tightly curled tail, as the dog shown in the photograph on this page. The Elkhound is a medium-sized dog and extremely hardy. 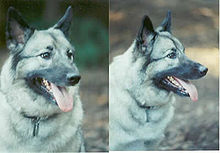 Norwegian Elkhounds are bred for hunting large game, such as wolf, bear and moose. Although the breed is strong and hardy, the dogs typically have an inseparable bond with their masters and are quite loyal. All Elkhounds have a sharp loud bark which makes them suitable as watchdogs.

Norwegian Elkhounds are loyal to their "pack" and make excellent family dogs given proper attention. It is bold, playful, independent, alert, extremely intelligent, and, at times, a bit boisterous. They rank 36th in Stanley Coren's The Intelligence of Dogs, being of above average working/obedience intelligence. This is a dog ready for adventure and is happiest if that adventure takes place outdoors in cold weather. It needs daily exercise, lest it become frustrated or even destructive. It is an exceptionally friendly breed. If untrained, it tends to pull when on leash. This dog needs attention for it to understand its place within the family (or the pack), else it may develop social problems and feel neglected. This is a very proud and noble breed that can easily have its feelings hurt if its owner deserts his or her allegiance or duty. An inevitable bond will develop between the dog's family, master, or pack, and if there is disloyalty, the dog will definitely feel it and be hurt. Although each dog is an individual, they generally are very gentle and get along great with children. They are happiest when they feel that they are part of the family.

Norwegian Elkhounds can be challenging to train because of their intelligence and deep independent streak, but they are acceptable obedience dogs, good-natured, and very understandable in their learning and training. For example, if they fail to "come" because there is something of greater interest in the other direction, they can be quick to learn the importance of the command if taught correctly but they are a willful breed and may never "come" on command. They can be wonderful in agility and are particularly good tracking dogs. 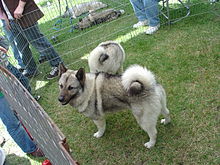 A Norwegian Elkhound being shown off at the Scandinavian Festival hosted by California Lutheran University in Thousand Oaks, CA

Norwegian Elkhounds sometimes carry a genetic predisposition to suffer from progressive retinal atrophy, or, like many medium and large breeds, hip dysplasia, renal problems and cysts, particularly in later life; they are also prone to thyroid problems. Overall, however, they are a hardy breed with few health problems.

Elkhounds are prone to rapid weight gain and must not be overfed .

The Norwegian Elkhound is an ancient breed, having been developed over 6,000 years ago to help early Scandinavians hunt big game such as moose and bear. Remains of dogs remarkably similar to the modern Elkhound have been found in grave sites such as the Viste Cave in Jæren, Norway, where they were dated as far back as 4000–5000 BC[citation needed]. Archaeological excavations in Scandinavia suggest this breed existed and was domesticated in the Stone age[citation needed]. At the end of the 19th century the breed came to England, and in 1901 the The Kennel Club officially recognized it.

For many years, the Norwegian Elkhound was considered the oldest of all dog breeds, going back further than 6,000 years. Recent DNA analysis suggests, however, that several "ancient" breeds have been "recreated in more recent times from combinations of other breeds" (Ostrander et al., 2004). The researchers found "genetic evidence for a recent origin of the Norwegian Elkhound, believed to be of ancient Scandinavian origin" ([1]). But this study only includes 85 of the world's more than 400 dog breeds, omits many primitive lineages, and clusters the breeds together into just four major groups called clades. Nevertheless, some researchers say that the Norwegian Elkhound is a descendant of the ancient "primitive" Pariah Dog that existed 4,000–7,000 years ago.[who?]

Of the four major clades that Ostrander et al. clusters together, Clade II includes dogs with the genetic haplotype D8 from two Scandinavian dog breeds: the Norwegian Elkhound and the Jämthund. This genetic sequence haplotype is closely related to two wolf haplotypes found in Italy, France, Romania, and Greece, and is also related to a wolf haplotype found in western Russia (Vila et al., 1997). Clade II appears to be only seen in Norwegian breeds and exhibits a vast amount of divergences. It is suggested that this clade illustrates an ancient and independent origin from wolves that are now extinct (Raisor, 2004). The Norwegian Elkhound evolved, at least partially, from ancestral grey wolf subspecies now found in south central Europe and western Russia and may very well be one of the most ancient of all dog breeds.

In Medieval times it was known as a dyrehund, meaning "animal-dog" in Norwegian, and was highly prized as a hunting dog but rarely seen or bred outside of Norway.[citation needed]