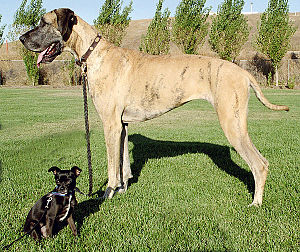 Dog breeds are groups of closely related and visibly similar domestic dogs, which are all of the subspecies Canis lupus familiaris, having characteristic traits that are selected and maintained by humans, bred from a known foundation stock.[1]

The term dog breed is also used to refer to natural breeds or landraces, which arose through time in response to a particular environment that included humans, with little or no selective breeding by humans.[2] Such breeds are undocumented, and are identified by their appearance and often by a style of working. Ancient dog breeds are some of the modern (documented) descendants of such natural breeds.

Dog breeds are not scientifically defined biological classifications, but rather are groupings defined by clubs of hobbyists called breed clubs. A dog breed is represented by a sufficient number of individuals to stably transfer its specific characteristics over generations. Dogs of same breed have similar characteristics of appearance and behavior, primarily because they come from a select set of ancestors who had the same characteristics.[3] Dogs of a specific breed breed true, producing young closely similar to the parents. An individual dog is identified as a member of a breed through proof of ancestry, using genetic analysis or written records of ancestry. Without such proof, identification of a specific breed is not reliable.[4] Such records, called stud books, may be maintained by individuals, clubs, or other organizations.

In biology, subspecies, race and breed are equivalent terms. Breed is usually applied to domestic animals; species and subspecies, to wild animals and to plants; and race, to humans.[5] Colloquial use of the term dog breed, however, does not conform to scientific standards of taxonomic classification. Breeds do not meet the criteria for subspecies since they are all considered a subspecies of the gray wolf; an interbreeding group of individuals who pass on characteristic traits and would likely merge back into a single homogenous group if external barriers were removed. The recognition of distinct dog breeds is not maintained by a scientific organization; they are maintained by a number of independent kennel clubs that need not apply to scientific standards and are often inconsistent. For instance, the Belgian Shepherd Dog is separated into four distinct breeds by some clubs, but not in others. Further, some groups of dogs which clearly share a persistent set of characteristics and documented descent from a known foundation stock may still not be recognized by some clubs as breeds. For instance, the feist is a hunting dog raised in the Southern United States for hunting small game. Feists have a consistent set of characteristics that reliably differentiate them from other dog types and breeds. However, the United Kennel Club recognizes one breed of feist, the Treeing Feist, while the American Kennel Club does not recognize any feist breed.

A dog is said to be purebred if its parents were purebred and it meets the standards of the breed. Purebred dog breeders of today "have inherited a breeding paradigm that is, at the very least, a bit anachronistic in light of modern genetic knowledge, and that first arose out of a pretty blatant misinterpretation of Darwin and an enthusiasm for social theories that have long been discredited as scientifically insupportable and morally questionable."[6] Morally questionable policies regarding purity of breed include obligatory surgical procedures to spay or neuter animals in numerous contexts. The American Kennel Club, for instance, allows mixed-breed dogs to be shown but requires these animals to be altered. It does not make such requirements for purebred dogs. California Assembly Act AB 1634 was a bill introduced in 2007 that would require all non-working dogs of mixed breed over the age of 6 months to be neutered or spayed.[7] The bill was morally controversial, leading the American Kennel Club to fight the bill.[8]

The clear genetic distinction between breeds of dog has made dogs of specific breeds good subjects for genetic and human medical research. "Using the dog as a discovery tool" in studying how cancer affects specific breeds may lead to identifying "susceptibility genes that have proved intractable in human families and populations."[9] 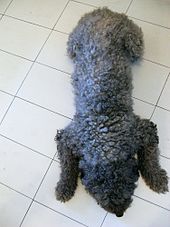 Spanish water dog (Perro de agua español). There are many different theories as to its origin

Pariah dogs originally established themselves near human populations,[10] developing and maintaining themselves without further selection. They do not carry any specialized working dog functions. Working, hunting and other functional breeds most likely appeared when there was a demand for certain traits and humans were able to devote time and resources to perfect those traits.

Initial dog selections centered on helpful behavior such as barking at unfamiliar creatures and people, guarding livestock, or hunting game. Some dog breeds, such as Saluki[11] or New Guinea Singing Dogs , have been bred for thousands of years. Some working dog breeds such as German Shepherd or Labrador Retriever[12] were established in the last few hundred years. More recently, dogs have been selected for attractiveness and distinctive features, resulting in a vast variety of breeds. Similar dog breeds are classified by dog registries in Dog Breed Groups.

Groups of individuals that have dogs of the same breed often unite into national breed clubs, describing their dogs in specific language by writing a breed standard.[13] Breed standards prescribe the most desirable specimen attributes and working abilities for purebred dogs of that breed as well as undesirable traits. National breed clubs promote their breeds via the local breed registry and international organizations. Dogs recognized by the main breed registries are said to be "purebred".

For the history and development of the dog, see Origin of the domestic dog, Ancient dog breeds, and Dog type.

There is much speculation but little evidence about why canids came to live with or near humans, possibly as long as 100,000 years ago.[14] With the beginnings of agriculture around 12,000 years ago, humans began making use of dogs in various ways, resulting in physical differences between dogs and their wolf ancestors.[15] In earlier times, little was written about dogs, although there were known dog types or landrace dogs, which developed over time with minimal human intervention, to fit in with the environment (including human culture) in which the dogs lived or live.[16][17] Dog breeds in the modern sense date only to the accurate documenting of pedigrees with the establishment of the English Kennel Club in 1873, in imitation of other stud book registries for cattle and horses.[18]

Many dog breeds today have names of original landrace types, such as the Border Collie. Other landrace types, such as retrievers, have been made more uniform in appearance through selective breeding, and developed into a variety of distinctive breeds.[19] Varieties of purebred dogs kept for working purposes can vary in appearance from purebred dogs of the same breed kept as showdogs and pets.[20]

New dog breeds are being continually created. They are either accidentally or purposely crossbred from existing breeds, developed for a specific style of work, or created just for marketing purposes. Recently discovered semi-feral and landrace types such as the New Guinea Singing Dog have been documented and registered as breeds for purposes of preservation. The Canadian department of agriculture has strict standards for the documenting of what it calls "emerging breeds".[21] Many registries which require minimal documentation are available for registering new and existing breeds of dog.[22] In general, a dog can only be guaranteed to be of a specific breed if it is documented in the stud book of a major dog registry or breed registry.[23]

Dog breeds can now be analyzed through genetics. Genetic markers (microsatellite markers and single-nucleotide polymorphisms) have been analyzed and a representative sample of 85 breeds were placed into four clusters, each cluster having shared ancestors. Cluster 1 is thought to be the oldest, including African and Asian dogs. Cluster 2 is mastiff type dogs; cluster 3 is herding dogs, and cluster 4 modern hunting type dogs (mostly developed in Europe in the 1800s.)[24]

Dog breeds are documented in lists of antecedents called a stud book.[26]

Dog breeds that have been documented may be accepted into one or more of the major registries (kennel clubs) of dog breeds, including the Fédération Cynologique Internationale (covering 84 countries), The Kennel Club (UK), the Canadian Kennel Club, the American Kennel Club, the United Kennel Clubs International, the Australian National Kennel Council and the New Zealand Kennel Club, and other national registries. The registry places the breed into the appropriate category, called a Group. Some Groups may be further subdivided by some registries. When the breed is fully accepted, the stud book is closed and only dogs bred from dogs in the stud book will be accepted for registration.[27] These dogs are referred to as purebred.

Dog breed clubs, especially of dogs bred for a particular kind of work, may maintain an open stud book and so may not be included in major registries. The dogs are still considered a breed. An example of this would be the Jack Russell Terrier Club of America.

Some dog breeds fit the definition of breed, especially breeds that develop naturally on islands or in isolated areas, but are few in number or have not been sufficiently documented to be registered with one of the major registries. An example of this would be the Kintamani Dog and other rare or independent breeds.

Breeds of dogs can be deliberately created in a relatively short period of time. When they breed true and have been sufficiently documented, they can be accepted by major registries. An example of this is the Cesky Terrier.[28]

Each dog breed has a written Breed Standard, a list of attributes that standardises the appearance of the breed, written by the breed's founder or breed club. Dog are judged in Conformation Dog Shows on the basis of how closely the individual dog conforms to the breed standard. As the breed standard only covers external aspects of the dog's appearance, breeding working dogs for show competition may cause appearance to be emphasised to the detriment of working ability.

Groups of dogs mistaken for breeds

Groups of dogs that may be mistaken for breeds include working dogs that are categorized by working style rather than appearance, although they may be of various ancestry and may not breed true. The difference between a named group of working dogs and a breed of dogs can be unclear. Examples would be the huntaway and other livestock dogs of New Zealand, the feist dogs of the southern United States, and the Patagonian sheepdogs of Argentina, which are collies mixed with other working dogs.[29]

Landrace dogs are another grouping that often have been named but are not always considered breeds.[30] "Landrace" is a term used for early types domesticated animals, including dogs, where isolated populations of dogs are selected according to human goals; developing over time rather than through modern breeding techniques.[31] An example of a landrace dog would be the dog described as 'Basset' as early as 1585.[32] The landrace Basset was developed into the modern breeds of Dachshund and Basset Hound, as well as modern day terrier breeds.[33] A Labrador is a type of dog.

Another group of dogs that may be mistaken for breeds are the progeny of intentional crossbreedings of two purebred dogs. The popularity of these crosses are often the result of fads. Examples include the Puggle and the Labradoodle.[34]

A black first-generation Labrador/Poodle cross puppy (informally referred to as a Labradoodle) only a few days of age.

Mixed breed dogs may be offered a form of registration to allow them to participate in organized dog events. Often given the name All-American or AMBOR dog, the name does not signify that dogs so registered are a breed. Dogs must be spayed or neutered to be registered.[35]

Individual dogs or small groups of dogs may use an existing breed name or be given an invented breed name and listed with little or no documentation for a fee with "registry" companies with minimal verification requirements. The dogs are then bred and marketed as a "registered" breed, sometimes as a "rare" or new breed of dogs.[36]