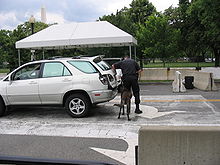 A detection dog getting ready to search a car for explosives. 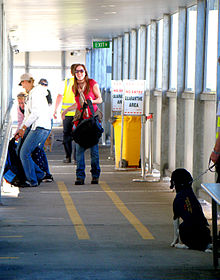 Fruit inspection line-up in Devonport. Passengers leave their luggage between the yellow lines and the dog searches the luggage by smelling for fruit. 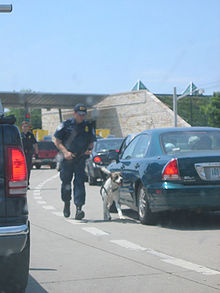 Detection dog at the Canadian-American Border 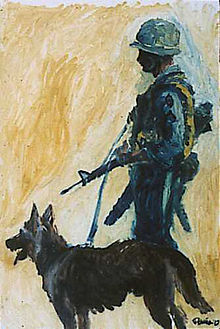 A detection dog or sniffer dog is a dog that is trained to and works at using its senses (almost always the sense of smell) to detect substances such as explosives, illegal drugs, or blood. Hunting dogs that search for game and search dogs that search for missing humans are generally not considered detection dogs. There is some overlap, as in the case of human remains detection dogs (sometimes called cadaver dogs), trained to detect human remains. They are also used for drug raids to find where the drugs are.

In the state of California, dogs are trained to detect the Quagga Mussel on boats at public boat ramps, as it is a invasive species. Sniffer dogs have also been enlisted to find bumblebee nests. The Bumblebee Conservation Trust has trained a springer spaniel to detect the colonies, assisting them with the conservation of threatened species. Some prisons have dogs trained to detect illicit cell phones in prison cells.[1]

Detection dogs have been trained to search for many substances, including:

One notable quality of detection dogs is that they are able to discern individual scents even when the scents are combined or masked by other odors. In one case at an Australian prison, a detection dog foiled an attempt to smuggle drugs that had been hidden in a woman's bra and smeared with coffee, pepper and Vicks Vapo-rub.[5] A sniffer dog can detect blood even if it has been scrubbed off surfaces. In one case, a sniffer dog sniffed a drop of blood on a wall although an attempt had been made to scrub it off. It was so small that it couldn't be seen without a microscope.[5]

Some of these functions can be carried out by trained pigs, which also have an excellent sense of smell, and have been used to hunt truffles, underground fungi, for centuries.

Their use has been criticized as allowing the police to conduct searches without cause, in a manner that is unregulated,[6][7] and for being used to target adults carrying drugs for personal use rather than commercial purposes.[8] They have been criticized as a form of show-policing, motivated more by the state's desire to be seen to be doing something than any serious attempt to respond to the dangers of drug use.[9]

Officers sometimes attempt to intimidate drivers into consenting to a search by saying that a detection dog is on the way, whether one is really on the way or not.[10] In 2001 the Australian state of New South Wales introduced legislation to provide police with powers to use drug detection dogs without a warrant in public places such as licensed venues, music festivals and public transport.[11] The legislation was reviewed by the NSW Ombudsman who in 2006 handed down a report highly critical of the use of dogs for drug detection. The report stated that prohibited drugs were found in only 26% of searches following an indication by a drug sniffer dog. Of these, 84% were for small amounts of cannabis deemed for personal use. The report also found that the legislation was ineffective at detecting persons in supply of prohibited drugs, with only 0.19% of indications ultimately leading to a successful prosecution for supply.[12][13]

During a 3-year period (from 2008) "probably more than 1000 pupils in about 90 classrooms" had been subjected to a drug dog coming into a classroom" where it was "voluntary for pupils to be present with the drug dog, but those who want to leave the classroom must answer some questions to police".[14] That such searches breach Norwegian law, has been claimed in an article in a journal of criminal law (Tidsskrift for strafferett), according to Aftenposten.[15]

Bed bug detection dogs are specially trained by handlers to identify the scent of bed bugs.

With the increased focus on green pest management and integrated pest management, bed bug detection dogs are gaining popularity in North America. Dogs are a safer alternative to pesticide use as a management strategy. If operators can find out exactly where bed bugs are located, they can minimize the area that needs to be sprayed. Dogs smell in parts per trillion, something a human cannot do, and detect bed bugs through all life cycle phases from eggs to nymphs to adults.

Bed bug detection dogs are relatively new. The National Entomology Scent Detection Canine Association,[16] states that there are over 100 dogs currently working in the U.S., but this number is increasing, while the International Forensic Detection Canine Association[17] based in the US, estimates well over 200 and counting. IFEDCA, founded by a Certified Master Trainer, Bill Whitstine, also estimates that the need for bed bug dogs far outweighs the supply. Bill Whitstine was the first trainer to train and certify bed bug detection dogs in the United States and has an estimated 150 dogs internationally.

Bed bug detection dogs are a viable and scientifically-proven alternative to traditional methods of pest detection. A 2008 report by the University of Kentucky Department of Entomology endorsed bed bug detection dogs by stating that the “reliability of the dogs has been impressive provided they are properly trained.”[18] Scientists at the university reviewed studies on the dogs and concluded that although expensive for operators, canine detection dogs were promising.

Bed bug detection is complicated by the fact that the insects can hide almost anywhere. Bed bug detection dogs solve this problem because they are small and agile, finding bugs in places humans cannot such as wall voids, crevices and furniture gaps.

With the increase in global travel and shared living accommodations, bed bugs have become more prevalent. The U.S. Environmental Protection Agency held a bed bug summit[19] in April 2009 to address the ongoing problem of bed bugs and how to eradicate them. The certification of bed bug detection dogs was discussed.