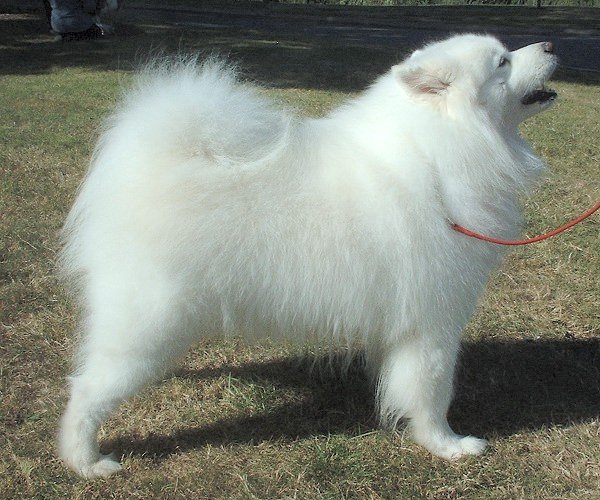 The Samoyed takes its name from the of . An alternate name for the breed, especially in Europe, is Bjelkier. These ic herders bred the fluffy, white, smiling dogs to help with the herding, to pull s when they moved, and to keep their owners warm at night by sleeping on top of them.

Samoyeds have a lot of vitality, and well cared for Samoyeds are known to retain their youthful, energetic spirit well into their senior years. The average lifespan for a Samoyed is 12 to 16 years, although some will live a little longer. Being a working breed, they have excellent stamina, and without daily exercise they will become bored and/or depressed, which can lead to excessive barking, destruction, weight gain, irritability, and escape artist behavior.

Samoyeds are typically a hardy dog, but do have their share of health concerns.They share a common resemblance with an American Eskimo dog. They may also be mistaken for Husky dogs by inexperienced people.

Samoyed eyes are usually black or brown, and are almond in shape. Blue or other color eyes can occur but are not allowed in the show ring.

Standard:Eyes:Almond shaped, medium to dark brown in colour, set well apart with alert and intelligent expression. Eyerims should be black and unbroken.

Samoyed ears are thick and covered with fur, triangular in shape, and erect. They are almost always white but can occasionally have a light brown tint.

NZKC Standard: Ears:Thick, not too long and slightly rounded at the tips, set well apart and well covered inside with hair. The ears should be fully erect in the grown Samoyed.

The Samoyed tail is one of the breed's more distinguishing features. Like the Alaskan Malamute, their tail is carried curled over their backs; however, unlike the Malamute, the Samoyed tail is held actually touching the back. It should not be a tight curl or held "flag" like, it should be carried laying over the back and to one side. In cold weather, Samoyeds may sleep with their tails over their noses to provide additional warmth. Almost all Samoyeds will allow their tails to fall when they are relaxed and at ease, as when being stroked, but will return their tails to a curl when more alert.

NZKC Standard: Tail:Long and profuse, carried over the back when alert; sometimes dropped when at rest.

Standard :Tail :Long and Profusely coated, carried over the back and to side when alert, sometimes dropped when at rest.

Samoyeds have a dense, double layer coat. The contains long, coarse, and straight s, which appear white but have a hint of silver coloring. This top layer keeps the relatively clean and free of debris. The under layer, or undercoat, consists of a dense, soft, and short fur that keeps the dog warm. The undercoat is typically heavily once or twice a year, and this seasonal process is sometimes referred to as "blowing coat". This does not mean the Samoyed will only shed during that time however; fine hairs (versus the dense clumps shed during seasonal shedding) will be shed all year round, and have a tendency to stick to cloth and float in the air. The standard Samoyed may come in a mixture of biscuit and white coloring, although pure white and all biscuit dogs aren't uncommon. Males typically have larger ruffs than females.

Samoyeds are typically very good about grooming themselves, and upkeep as far as bathing is minimal. Dirt typically falls from the outer layer of fur with little work, making the dog deceptively easy to keep very clean looking. Puppy fur is more porous and will tend to take on the color of grass or mud if the dog spends a lot of time in outdoor environments. Upkeep in terms of brushing is more extensive, as the dense coat, and particularly the silkier regions such as behind the ears, will tend to mat if not combed out (ideally) weekly. Samoyeds may occasionally need the fur between the pads of their paws trimmed, but otherwise their coat does not need to be clipped. Except for medical reasons or in the case of severe matting it is not recommended to shave a Samoyed's fur, as the coat acts as an insulator against both cold and moderate heat, and protects the dog's light colored skin from burning in the sun.

An interesting characteristic of the breed is that these dogs have virtually no smell or "doggy odor" about them, making them especially well-suited to living indoors. The lack of dander also makes them hypoallergenic. [http://www.samoyedrescue.com/samoyedfaqs.htm] The dense coat can make summer temperatures uncomfortable for them in very warm climates, and they prefer to be indoors where the air is cooled. The coat also acts as a natural repellent to fleas and ticks. Samoyeds are usually white but a biscuit color is also a breed standard.

Samoyeds' friendly disposition makes them poor guard dogs; an aggressive Samoyed is rare. With their tendency to bark however, they can be diligent watch dogs, barking whenever something approaches their territory. Samoyeds are excellent companions, especially for small children or even other dogs, and they remain playful into old age. Samoyeds are also known to be stubborn at times and difficult to train, due to unwillingness rather than lack of intelligence; they must be persuaded to obey commands. With their heritage, a Samoyed is not averse to pulling things, and an untrained Samoyed has no problem pulling its owner on a leash rather than walking alongside.Samoyeds were also used to herd reindeer. They will instinctively act as herd dogs, and when playing with children, especially, will often attempt to turn and move them in a different direction. The breed is characterized by an alert and happy expression which has earned the nicknames "Sammy smile" and "smily dog."

Samoyeds can be affected by a genetic disease known as "Samoyed Hereditary Glomerulopathy", a disease. The disease is known to be caused by an recessive faulty and therefore the disease is more severe in male Samoyeds. Carrier females do develop mild symptoms after 2-3 months of age, but do not go on to develop renal failure. The disease is caused by a defect in the structure of the fibrils of the . As a consequence, the collagen fibrils of the glomerular basement membrane are unable to form cross-links, so the structural integrity is weakened and the membrane is more susceptible to "wear-and-tear" damage. As the structure of the basement membrane begins to degenerate, are lost in the urine and symptoms begin to appear. Affected males appear healthy for the first 3 months of life, but then symptoms start to appear and worsen as the disease progresses: the dog becomes lethargic and muscle wastage occurs, as a result of . From 3 months of age onwards, a reduced is detected, indicative of progressive . Death from renal failure usually occurs by 15 months of age.

As yet there is no genetic screening test available for Samoyed Hereditary Glomerulopathy. Therefore, female Samoyeds known or suspected of being carriers of the disease should not be bred from. If a carrier female is mated with a healthy stud dog, the female offspring have a 50% chance of being carriers for the disease, and any male offspring have a 50% chance of being affected by the disease. The s of any affected Samoyeds should not be bred from in order to prevent the disease being passed on to future generations.

Hip dysplasia is also a concern for Samoyeds as are eye problems such as and and other retinal problems. Like other purebred dogs, Samoyeds are prone to diabetes and other diseases if their owners are not careful. Samoyeds are also known to have touchy stomachs, and may get ill easily when fed something too rich.

When a Samoyed "blows" their coat, the majority of the undercoat sheds and is renewed; the old coat can come out in large clumps, leading to bald spots in some extreme cases. One can comb it deeply, with a metal comb, which will speed up the shedding process and allow the Samoyed to regain its usual appearance more quickly. Frequent combing during a blow will be a great help in preventing matting. Giving a Samoyed a bath is a somewhat time consuming process as the coat is semi-weatherproof and will take some time to get completely wet, then completely rinsed. The Samoyed coat should be dried with cool, forced air (which can be done with a canister dryer, shop vacuum or blow or kennel dryer) as water can be trapped in the very thick undercoat, has difficulty evaporating and may remain in the fur for some time, possibly leading to a "hot spot." Drying the Samoyed coat will also reduce matting caused by dampness in the undercoat. It is important to rinse well, as any shampoo or soap left in the coat after bathing can lead to a "hot spot" or a fungal infection, which is difficult to cure without shaving the affected location. To keep the Samoyed's coat gleaming, dedicated grooming and a healthy diet cannot be overlooked.

The Samoyed name quickly became obsolete for the Nenets people after the Russian Revolution (perceived as derogatory; "see Nenets article"). However, by then, explorers (for example, and ) had brought enough of the dogs back to Europe to keep the name and to establish the breed both there and in the US.

Fridtjof Nansen believed that the use of sled dogs was the only effective way to explore the north and used Samoyeds on his polar expeditions. Unfortunately, his plan was disastrous to the animals, as he planned to feed the weaker dogs to the stronger ones as they died during the expedition. In the end, he lost almost all of his dogs due to his plan.

Roald Amundsen used a team of sled dogs led by a Samoyed named Etah on the first expedition to reach the .

Recent DNA analysis of the breed has led to the Samoyed being included amongst the fourteen most [http://www.nytimes.com/2004/05/21/science/21dog.html?ex=1400472000&en=6b49c839cde80d81&ei=5007&partner=USERLAND] , along with Siberian Huskies, s, the , and 10 others of a diverse geographic background.The first Samoyed was brought to United States by fur traders in 1906. The Samoyeds have been bred and trained for at least 3,000 years.

*The breed is sometimes d "The Smiley Dog" because they usually have a permanent smiling look that makes them appear pleased to see everyone.
*Shed Samoyed fur is sometimes used as an alternative to wool in , with hypoallergenic properties and a texture similar to . The products of these yarns are often unbearably hot. The fur is sometimes also used for the creation of flys for .
*Samoyeds are rarely used for "highly" competitive because of the emergence of breeds bred specifically for the sport such as the , however they are still fully capable of racing competitively or pulling sleds recreationally if desired.
*Samoyeds are very rarely used for everyday herding work on farms, as breeds with higher herding drives such as s or s are more practical to use for this job. Many Samoyeds however, do retain the herding instinct and occasionally have been used to herd sheep, goats, ducks, and small children competitively and recreationally.

* and , the lead dogs for 's North Pole expedition.
*Etah, the lead dog for 's expedition to the South Pole, the first to reach the pole.
*Soichiro is the name of a Samoyed that belonged to one of the main characters in the popular Japanese , "". He was featured prominently throughout most of the series, and became a major character in his own right, often serving as comic relief.
*Kenny the Samoyed Comic Strips funnies in