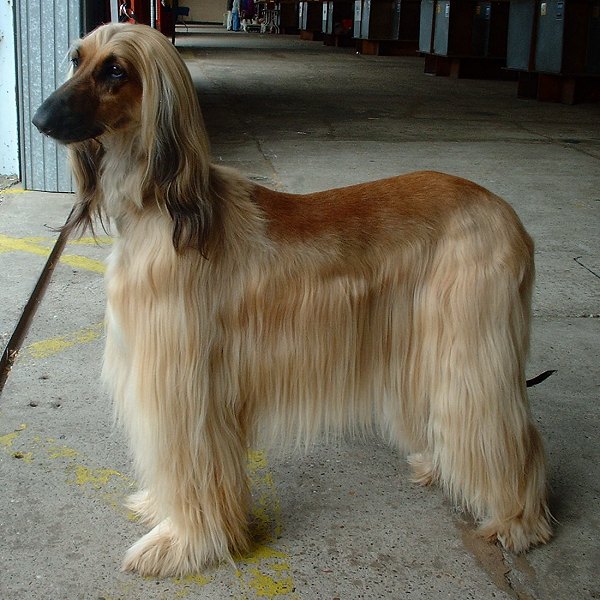 
The Afghan Hound is a very old breed. Distinguished by its thick, fine, silky coat and its tail with a ring curl at the end, the breed acquired its unique features in the cold mountains of , where it was originally used to hunt s, and s by coursing them. Its local name is Tāzī (PerB|تازی). Other alternate names for this breed are "Balkh Hound", "Baluchi Hound", "Barutzy Hound", "Shalgar Hound", "Kabul Hound", "Galanday Hound" or sometimes incorrectly "African Hound".

The Afghan Hound is tall, standing 24 to 29 inches (63-74 cm) in height and weighing 45 to 60 pounds (20-30 kg). The coat may be any colour, but white markings, particularly on the head, are discouraged; many individuals have a black facial mask. Some are almost white, but particolour hounds (white with islands of red or black) are not acceptable and may indicate impure breeding. The long, fine-textured coat requires considerable care and grooming. The long topknot and the shorter-haired saddle on the back in the mature dog are distinctive features of the Afghan Hound coat. The high hipbones and unique small ring on the end of the tail are also characteristics of the breed.

The temperament of the typical Afghan Hound can be aloof and dignified, but happy and clownish when playing. The breed has a reputation among dog trainers of having a relatively slow "obedience intelligence" as defined by author . [ [http://en.wikipedia.org/wiki/The_Intelligence_of_Dogs_%28book%29] ] The Afghan Hound has many cat-like tendencies and is not slavish in its obedience as are some other breeds. The Afghan hound has a leaning towards independence. Owners should not be surprised if their Afghan hounds sometimes choose to ignore commands. Although seldom used today for hunting in and America where they are popular, Afghan hounds are frequent participants in events and are also popular in the sport of ing.

Afghan Hounds in UK surveys had a median lifespan of about 12 years,

Major health issues are allergies, and . Sensitivity to is an issue the Afghan hound shares with the rest of the group, as sighthounds have relatively low levels of body fat.

Afghan hounds are also among the dog breeds most likely to develop , a rare condition which causes the thoracic ducts to leak, allowing large quantities of chyle fluid to enter the dog's chest cavity.Fact|date=March 2008 This condition commonly results in a lung torsion (in which the dog's lung twists within the chest cavity, requiring emergency surgery), due to the breed's typically deep, "barrel"-shaped chest. If not corrected through surgery, chylothorax can ultimately causing fibrosing pleuritis, or a hardening of the organs, due to scar tissue forming around the organs to protect them from the chyle fluid. Chylothorax is not necessarily, but often fatal. Most surgical options have roughly a 50% success rate, and multiple surgeries are common.Fact|date=March 2008 While this condition is extremely rare, Afghan hound owners would be wise to keep this information at hand, as the condition can be difficult to diagnose. When selecting an Afghan hound puppy, it is also advised to inquire about chylothorax in the dog's lineage, as there is some indication that the condition may be genetic.

s are among the oldest recognisable types of dogs, and genetic testing has placed the Afghan Hound breed among those with the least genetic divergence from the wolf on some markers; [cite web
url= http://www.americanscientist.org/issues/feature/2007/5/genetics-and-the-shape-of-dogs
title= Genetics and the Shape of Dogs; Studying the new sequence of the canine genome shows how tiny genetic changes can create enormous variation within a single species
accessmonthday= 09/22
accessyear= 2008
last= Ostrander
first= Elaine A.
date= September-October 2007
work= American Scientist (online)
publisher= www.americanscientist.org
pages= also see chart page 4] this is taken to mean that such dogs are descended from the oldest s, not that the breeds tested had in antiquity their exact modern form. Today's modern purebred breed of Afghan Hound descends from dogs brought in the 1920s to Great Britain, and are a blending of types and varieties of long haired sighthounds from across Afghanistan and the surrounding areas. [ [http://www.afghan-network.net/Culture/afghan-hound.html Afghan Hound: A History] ] Some had been kept as hunting dogs, others as guardians. [Afghan Hounds, by Beverly Pisano pg 12TFH Publications (June 1988)ISBN-10: 0876666829ISBN-13: 978-0876666821]

Although demonstrably ancient, verifiable written or visual records that tie today's Afghan Hound breed to specific Afghan owners or places is absent, even though there is much speculation about possible connections with the ancient world among fanciers and in non-scientific breed books and breed websites. Connections with other types and breeds from the same area may provide clues to the history. A name for a desert coursing Afghan hound, (sag-e-tazi), suggests a shared ancestry with the very similar Tasy breed from the area of and . [ [http://www.thebreedsofdogs.com/EAST_RUSSIAN_COURSING_HOUNDS.htm East Russian Coursing Hounds, author unknown] ] ) Other types or breeds of similar appearance are the Taigan from the mountainous region on the Chinese border of Afghanistan, and the Barakzai, or Hound, from /. There are at least thirteen types known in Afghanistan,

Once out of Persia, India and Afghanistan, the history of the Afghan Hound breed becomes an important part of the history of the very earliest dog shows and (UK). Various sighthounds were brought to England in the 1800s by army officers returning from India (which at the time included Packistan), Afghanistan, and , and were exhibited at dog shows, which were then just becoming popular, under various names, such as Barukzy hounds. They were also called "Persian Greyhounds" by the English, in reference to their own indigenous sighthound.

One dog in particular, "Zardan", was brought in 1907 from India by Captain Bariff, and became the early ideal of for what was still called the Persian Greyhound. Zardan was the basis of the writing of the first breed standard in 1912, but breeding of the dogs was stopped by World War I.

Out of the longhaired sighthound types known in Afghanistan, two main strains make up the modern Afghan Hound breed. The first were a group of hounds brought to from by Major and Mrs. G. Bell-Murray and Miss Jean C. Manson in 1920, and are called the "Bell-Murray strain". These dogs were of the lowland or steppe type, also called kalagh, and are less heavily coated. The second strain was a group of dogs from a kennel in owned by Mrs. Mary Amps, which she shipped to England in 1925. She and her husband came to Kabul after the Afghan war in 1919, and the foundation sire of her kennel (named Ghazni) in Kabul was a dog that closely resembled Zardin. Her "Ghazni strain" were the more heavily coated mountain type. Most of the Afghans in the United States were developed from the Ghazni strain from England. The first Afghans in Australia were imported from the United States in 1934, also of the Ghazni strain. [ [http://www.aniwa.com/en/chien/document/en/chien/magazine/discover/dog-breeds/afghan-hound--from-the-streets-of-kabul-to-the-main-rings-of-the-world/index.htm Chien Magazine Afghan Hound history] ] ) The French breed club was formed in 1939 (FALAPA). The mountain and steppe strains became mixed into the modern Afghan Hound breed, and a new standard was written in 1948, which is still used today.

The spectacular beauty of Afghan Hound dogs caused them to become highly desirable showdogs and pets, and they are recognised by all of the major kennel clubs in the English-speaking world. One of the Amps Ghazni, "Sirdar", won BIS at in 1928 and 1930. An Afghan hound was featured on the cover of , November 26, 1945. "Afghan Hounds were the most popular in Australia in the 1970’s...and won most of the major shows". [ [http://www.aniwa.com/en/chien/document/en/general/magazine/discover/dog-breeds/a-bunch-of-internationally-famous-breeders/index.htm] ] An Afghan Hound won BIS (Best in Show) at the 1996 in Budapest. Afghan hounds were BIS at the in 1957 and again in 1983. [ [http://www.westminsterkennelclub.org/history/biswinners.html Westminster Kennel Club web site, Best in Show Winners page. Retrieved August 30, 2007] ] That win also marked the most recent win at Westminster for an breeder-owner-handler, Chris Terrell.

The Afghan Hound breed is no longer used for hunting, although it can be seen in the sport of . [http://www.peds.co.uk/afghan/coursing.htm Afghan Hound Lure Coursing] ]

Because of its distinctive appearance, the Afghan hound has been represented in animated feature films, including Universal Pictures' (Sylvie), Disney's (Ruby) and the television series (Prince Amir of Kinjan). Afghan hounds have also been featured in television advertisements and in fashion magazines. [ [http://www.afghanhoundactors.com/about.html Afghan Hound Actors website] ] . The Afghan hound is represented in books as well, including being featured in a series of mystery novels by Nina Wright (Abra), and a talking Afghan Hound in David Rothman's The Solomon Scandals (2008, Twilight Times Books). In the novel "", uses an Afghan hound (named Sohrab) to represent aspects of one of the book's human characters. [The Philosophy of Virginia Woolf: A Philosophical Reading of the Mature NovelsBy A. O. FrankPublished by Akademiai Kiado, 2001ISBN 9630578506, 9789630578509165 pages, pg 151]

On , , Korean scientist announced that his team of researchers had become the first team to successfully clone a dog, an Afghan Hound named . In 2006 Hwang Woo-Suk was dismissed from his university position for fabricating data in his research. Snuppy, nonetheless, was a genuine clone, and thus the first cloned dog in history. [ [http://www.npr.org/templates/story/story.php?storyId=4784301 Meet Snuppy, the World's First Cloned Dog : NPR ] ]