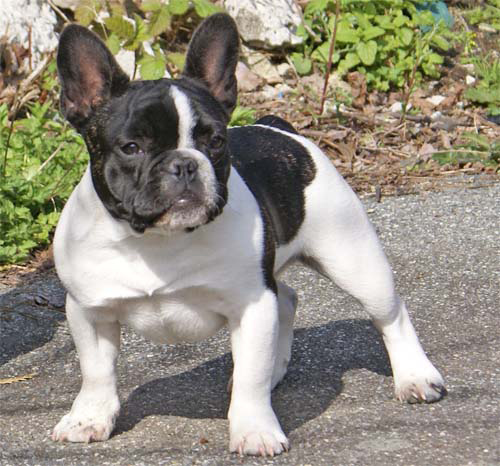 image_caption = A brindle and white French Bulldog
kcukgroup = Utility
kcukstd = http://www.thekennelclub.org.uk/item/159
name = French Bulldog
nickname = Frenchie
nzkcgroup = Non-sporting
nzkcstd = http://www.nzkc.org.nz/br732.html
ukcgroup = Companion
ukcstd = http://mail.ukcdogs.com/UKCweb.nsf/80de88211ee3f2dc8525703f004ccb1e/909ee5f8d11972e885257044004f101c?OpenDocument The French Bulldog is a small companion breed of . The name indicates that France is the country of origin, but the Americans and British may have played a larger part in development of the breed. The breed is commonly called the "Frenchie".

While theories abound about the exact origin of the French Bulldog, the most prevalent opinion is that around the mid-1800s Normandy lace workers from England took smaller bulldogs with them when they sought work in France. In the farming communities north of France that the lace workers settled in, the little bulldogs became very popular as ratters and loyal family companions and their population began to swell. These little bulldogs were in fact "culls" of the established bulldog breeders in England, who were generally more than happy to sell these undersized examples of their breed to fanciers of the "new" breed in England. This was especially true of the "tulip" eared puppies that cropped up at times in bulldog litters. French bulldogs were originally bred as ratters, but are now bred as lap dogs and companions.

As the new, smaller bulldogs gained popularity in France, they became favorites of the Parisian "Belles De Nuit" - the street walkers. One reason for this is that when strolled, the exotic looking dogs brought attention to their owner, and gave potential customers a legitimate reason to chat with her. Another is that the docile breed was content to nap for short stretches when brought to hotel rooms, without making a fuss. Breed historians can still sometimes turn up notorious "French Postcards" bearing images of scantily clad French prostitutes posing with their little "Bouledogues Français". The aura of notoriety that ownership of the little dogs conveyed made them a fashionable way for the well-to-do classes to show off how daring they could be, and they soon became favorites of the "artistic" set across Europe.

Photos dating to around this time show photos of the Russian royal family posing alongside their French bulldogs, and they imported several of the little dogs from France. Other famous fanciers included , the author and . A French bulldog, insured for the, at that time, astronomical sum of $750, was on board the ill-fated Titanic.

It is inarguable that without the influence of dedicated, turn-of-the-century American fanciers the breed would not be what it is today. It is they that organized the very first French bulldog club in the world, and it was they who insisted that the "bat" ear so associated with the breed today was correct. Until that time, French bulldogs were shown with either the "bat" or "rose" ear.

All in all, French bulldogs are an international breed, with breeders of many nations being responsible for the creation of the dogs we know today.

French bulldogs are a compact, muscular dog with a smooth coat, snub nose and solid bone structure. Their physical appearance is characterized by naturally occurring 'bat ears' that are wide at the base and rounded at the top. Their tails are naturally short, not cropped, straight or screwed but not curly.

Under the and standards, weight is not to exceed 28 pounds (13 kg). In general, "Frenchies" range in weight between 20 and 28 pounds. The does not set a hard and fast weight limit, simply stating 'The weight must not be below 8 kg nor over 14 kg for a bulldog in good condition, size being in proportion with the weight'.

French bulldogs come in a variety of colors and coat patterns. Here is what the AKC standard has to say about color:

The FCI standard disallowed fawn until the mid-nineties. Color disqualifications under the current FCI standard are "black and tan, mouse grey, brown".

All of this variety has a drawback, however - confusion over just what name applies to each color or color pattern.

In its most simple forms, French bulldog coat color can be simply described as fawn, with a variety of possible marking patterns and dilutions possible. Fawn can range in shade from deep red to cafe au lait to pale golden cream. The differences in appearance from here are all due to variants in marking patterns, which range from brindle - black stripes in varying degrees of repetition and thickness overlying the fawn base coat, to pied - varying patches of brindle overlaying fawn interspersed with white markings, to black masked fawn - fawn in differing shades with a classic 'masking' pattern on the face and dorsal area of the body. There are a myriad of variants of marking type, pattern, size and placement possible within these parameters.

Here are a few examples of common - and not so common - coat patterns and colors within French Bulldogs. All terms should be taken objectively, as there is a great deal of difference of opinion within the Frenchie community as to which term defines which color.

breeds they require close contact with humans. They have fairly minimal exercise needs, but do require at least daily walks. Their calm nature makes them excellent choices for apartment dwellers, as does their usually sensible attitude towards barking. As a flat faced breed, it is essential that owners understand that French Bulldogs cannot live outdoors. Their bulk and their compromised breathing system makes it impossible for them to regulate their temperature efficiently. In addition, Frenchies are top heavy and therefore have a difficult time swimming. Be cautious when exercising your Frenchie during hot or humid weather, as well.

French Bulldogs can play too roughly for some smaller children, and should be monitored at all times during play. As well, children should be cautioned not to pick French Bulldogs up, as the dogs' small size can mask how heavy they are.

French Bulldogs are essentially a bull and terrier breed, and as such, it is not surprising to learn that canine aggression can sometimes occur. Generally, this takes the form of same sex aggression, with the bitches being the most culpable in this respect. Owners considering adding a second dog to their household are usually cautioned to choose one of the opposite sex. Spaying or neutering can do much to curb aggressive tendencies before they begin. The French Bulldog energy level can range from hyperactive and energetic to relaxed and laid back.

There are several congenital diseases and conditions to which French Bulldogs are susceptible, although they are still considered among the healthiest of the Bull Breeds. Frenchies can suffer from (VWD), a bleeding disorder that is also found in humans and is similar to Hemophilia, which can impede their clotting. In conjunction to this, French Bulldogs may also suffer from thyroid condition. Many breeders follow a program of testing younger dogs for VWD, and only testing for thyroid at that time if the VWD factor is low. In this program, the breeder tests thyroid again just prior to using the dog for breeding. Other breeders test both VWD and Thyroid at the same time.

French Bulldogs suffer from syndrome, which is what creates the flat faced appearance of the Frenchie. As a result, one of the most common defects in French Bulldogs is elongated or . Puppies affected with are generally put down at birth, as it is generally considered to be an almost impossible condition to correct. Elongated can manifest as anything from a mild condition causing labored breathing to severe condition that can cause the affected dog to pass out from moderate exercise.

Frenchies may also have a tendency towards eye issues. , or everted third eyelid, has been known to occur, although it is more common in (English) and Dogs. Glaucoma, retinal fold dsyplasia, corneal ulcers and juvenile cataracts are also conditions which have been known to afflict French Bulldogs. Screening of prospective breeding candidates through - the Canine Eye Registration Foundation - can help to eliminate instances of these diseases in offpsring. The s under the eyes of the French Bulldog must be cleaned regularly and kept dry, in order to avoid fold infections. In extremely severe cases of persistent fold infections, some veterinarians have performed fold removal surgeries.

Another result of the compacted air way of the French Bulldog is their inability to effectively regulate temperature. While a regular canine may suffer to some degree from the heat, to a Frenchie it may be lethal. It is imperative that they be protected from temperature extremes at all times, and that they always have access to fresh water and shade.

French Bulldogs can also suffer from an assortment of back and spinal diseases, most of which are probably related to the fact that they were selectively chosen from the examples of the Bulldog Breed. This condition is also referred to as chondrodysplasia. Some breeders feel that only dogs that have been X-rayed and checked for spinal anomalies should be bred from, but this is a difficult position to take sides on. While it is true that no dog affected with a spinal disease should be bred from , there is a great deal of variance in the appearance of a French Bulldog's spine as compared to, for example, a Labrador Retriever. If possible, such decisions should be left to either a Vet or breeder who has seen quite a few Bulldog Breed Spinal Xrays, to avoid eliminating dogs unnecessarily.

French Bulldogs frequently require to give birth. As well, many French Bulldog stud dogs are incapable of naturally breeding, requiring breeders to undertake artificial insemination of bitches. French Bulldog bitches can also suffer from erratic or 'silent' heats, which may be a side effect of or impaired thyroid function.

Thyroid disease may also be responsible for some of the skin conditions which afflict some Frenchies. Skin allergies, obsessive foot licking, and interdigital cysts have been known to affect some French Bulldogs.