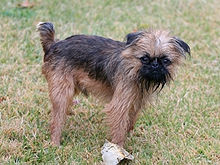 Companion dogs include any dog kept not for work but as a pet. In particular, small dogs such as those of the lapdog type are often thought of as companion dogs, but dogs do not need to be small to be considered companion dogs. The term companion dog does not refer to any one type of dog.

The purpose of this chart is to compare the dog breeds placed by the United Kennel Club (US) in their Companion Dog Group with the way the same breeds are categorised by the Fédération Cynologique Internationale and a few other national (major) kennel clubs.

Other kennel clubs and registries

Kennel Clubs in countries other than those listed may also use the term Companion Group, and their definition may be the same or may differ. "Companion Group" or a similar term may also be a term used by minor registries, kennel clubs, breed clubs, sporting clubs, and internet dog businesses. Each may or may not define the term separately.

A breed that is not recognized by a kennel club means that it has not been sufficiently vetted according to that particular kennel club's rules. It does not mean that the breed is not a breed. Major kennel clubs usually require a breed to have a specific amount of documentation, as well as a large enough breed club to warrant the training of judges for the breed, for the breed to be accepted. Small clubs and internet registry businesses may have fewer requirements, so may be seen to register more little known breeds.