Norse colonization of the Americas

Norse colonization of the Americas

The Norse colonization of the Americas began as early as the 10th century, when Norse sailors (usually referred to as Vikings) explored and settled areas of the North Atlantic, including the northeastern fringes of North America.[1]

While the Norse colony in Greenland lasted for almost 500 years, the continental North American settlements were small and did not develop into permanent colonies. While voyages, for example to fetch timber, are likely to have occurred for some time, there is no evidence of enduring Norse settlements on mainland North America.[2] 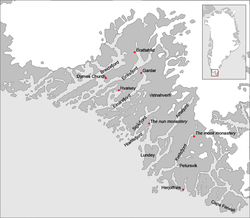 Map of the Eastern Settlement, covering approximately the modern municipalities of Qaqortoq, Narssaq and Nanortalik. Eiriksfjord (Erik's fjord) and his farm Brattahlid are shown, as is the location of the bishopric at Gardar.

According to the Sagas of Icelanders, Norsemen from Iceland first settled Greenland in the 980s. There is no special reason to doubt the authority of the information that the sagas supply regarding the very beginning of the settlement, but they cannot be treated as primary evidence for the history of Norse Greenland because they embody the literary preoccupations of writers and audiences in medieval Iceland that are not always reliable.[3] Erik the Red (Old Norse: Eiríkr rauði), having been banished from Iceland for manslaughter, is said to have explored the uninhabited southwestern coast of Greenland during the three years of his banishment.[4][5] He made plans to entice settlers to the area, even purposefully choosing the name Greenland to attract potential colonists, saying "that people would be more eager to go there because the land had a good name".[6] The inner reaches of one long fjord, named Eiriksfjord after him, was where he eventually established his estate Brattahlid. He issued tracts of land to his followers.[7] 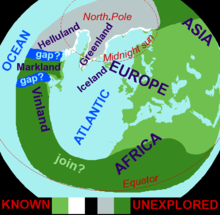 At its peak, the colony consisted of two settlements, the Eastern and the Western Settlement, with a population of 3,000-5,000; at least 400 farms have been identified by archaeologists.[7] Norse Greenland had a bishopric (at Garðar) and exported walrus ivory, furs, rope, sheep, whale or seal blubber, live animals such as polar bears, and cattle hides. In 1261, the population accepted the overlordship of the Norwegian King although it continued to have its own law. In 1380, the Norwegian Kingdom entered into a personal union with the Kingdom of Denmark.

The colony began to decline in the 14th century. The Western Settlement was abandoned around 1350, and by 1378 there was no longer a bishop at Garðar. After a marriage was recorded in 1408, no written records mention the settlers. It is probable that the Eastern Settlement was defunct by the late 15th century. The most recent radiocarbon date found in Norse settlements as of 2002 was 1430 A.D. (+/- 15 years). Several theories have been advanced to explain the decline. The Little Ice Age of this period would have made travel between Greenland and Europe more difficult, and it would have made farming more difficult; in addition, Greenlandic ivory may have been supplanted in European markets by cheaper ivory from Africa. Despite the loss of contact with the Greenlanders, the Norwegian-Danish crown continued to consider Greenland a possession.

Not knowing whether the old Norse civilization remained in Greenland or not—and worried that if it did, it would still be Catholic 200 years after the Scandinavian homelands had experienced the Reformation—a joint merchant-clerical expedition led by the Norwegian missionary Hans Egede was sent to Greenland in 1721. Though this expedition found no surviving Europeans, it marked the beginning of Denmark's assertion of sovereignty over the island.

According to the Icelandic sagas ("Eirik the Red's Saga"[8] and the "Saga of the Greenlanders"—chapters of the Hauksbók and the Flatey Book), the Norse started to explore lands to the west of Greenland only a few years after the Greenland settlements were established. In 985 while sailing from Iceland to Greenland with a migration fleet consisting of 400-700 settlers[7][9] and 25 other ships (14 of which completed the journey), a merchant named Bjarni Herjólfsson was blown off course, and after three days' sailing he sighted land west of the fleet. Bjarni was only interested in finding his father's farm, but he described his discovery to Leif Ericson who explored the area in more detail and planted a small settlement fifteen years later.[7]

The sagas describe three separate areas discovered during this exploration: Helluland, which means "land of the flat stones"; Markland, "the land of forests", definitely of interest to settlers in Greenland where there were few trees; and Vinland, "the land of wine" (or as suggested by modern linguists "the land of meadows"), found somewhere south of Markland. It was in Vinland that the settlement described in the sagas was founded.

All four of Erik the Red's children visited the North American continent: his sons Leif, Thorvald and Thorstein and their sister Freydis. Thorvald died there. 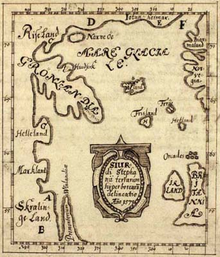 Using the routes, landmarks, currents, rocks, and winds that Bjarni had described to him, Leif sailed some 1,800 miles to the New World with a crew of 35—sailing the same knarr Bjarni had used to make the voyage. He described Helluland as "level and wooded, with broad white beaches wherever they went and a gently sloping shoreline."[7] Leif and others had wanted his father, Erik the Red, to lead this expedition and talked him into it. However, as Erik attempted to join his son Leif on the voyage towards these new lands, he fell off his horse as it slipped on the wet rocks near the shore, thus he was injured and stayed behind.[7]

Leif wintered in 1001, probably near Cape Bauld on the northern tip of Newfoundland, where one day his German foster father Tyrker was found drunk, on what the saga describes as "wine-berries." Squashberries, gooseberries, and cranberries all grew wild in the area. There are varying explanations for Leif apparently describing fermented berries as "wine."

Moreover, in Old Norse, there are different meanings for the word "vin" depending on whether a short i or long í is used. A long í in the word "vin" usually refers to "wine," whereas a short i could mean "pasture" or "meadow land." The debate is ongoing, but recent linguistic research may indicate that the pasture or meadow land argument is the more appropriate interpretation of the term Vinland.

Leif spent another winter at "Leifsbodarna" without conflict, and sailed back to Brattahlid in Greenland to assume filial duties for his father.

In 1004, Leif's brother Thorvald Ericson sailed with a crew of 30 men to Newfoundland and spent the following winter at Leif's camp. In the spring, Thorvald attacked nine of the local people who were sleeping under three skin-covered canoes. The ninth victim escaped and soon came back to the Norse camp with a force. Thorvald was killed by an arrow that succeeded in passing through the barricade. Although brief hostilities ensued, the Norse explorers stayed another winter and left the following spring. Subsequently another of Leif's brothers, Thorstein, sailed to the New World to retrieve his dead brother's body, but he only stayed for one summer.[7]

In 1009 Thorfinn Karlsefni, also known as "Thorfinn the Valiant", supplied three ships with livestock and 160 men and women[9] (although another source sets the number of settlers at 250). After a cruel winter, he headed south and landed at Straumfjord but later moved to Straumsöy, possibly because the current was stronger there. A sign of peaceful relations between the indigenous peoples and the Norsemen is noted here; the two sides bartered with furs and gray squirrel skins for milk and red cloth, which the natives tied around their heads as a sort of headdress.

There are conflicting stories but one account states that a bull belonging to Karlsefni came storming out of the wood, so frightening the natives that they ran to their skin-boats and rowed away. They returned three days later, in force. The natives used catapults, hoisting "a large sphere on a pole; it was dark blue in color" and about the size of a sheep's belly,[10] which flew over the heads of the men and made an ugly din.[10] The Norsemen retreated. Leif Ericson's half-sister Freydís Eiríksdóttir was pregnant and unable to keep up with the retreating Norsemen. She called out to them to stop fleeing from "such pitiful wretches", adding that if she had weapons, she could do better than that. Freydís seized the sword belonging to a man who had been killed by the natives. She pulled one of her breasts out of her bodice and struck it with the sword, frightening the natives, who fled.[10]

Settlements in continental North America aimed to exploit natural resources such as furs and in particular lumber, which was in short supply in Greenland.[11] It is unclear why the short-term settlements did not become permanent, though it was in part because of hostile relations with the indigenous peoples, referred to as Skrælings by the Norse.[12] Nevertheless, it appears that sporadic voyages to Markland for forages, timber, and trade with the locals could have lasted as long as 400 years.[13][14]

Evidence of continuing trips includes the Maine Penny, a Norwegian coin from King Olaf Kyrre's reign (1067–1093) allegedly found in a Native American archaeological site in the U.S. state of Maine, suggesting an exchange between the Norse and the Native Americans late in or after the 11th century; and an entry in the Icelandic Annals from 1347 which refers to a small Greenlandic vessel with a crew of eighteen that arrived in Iceland while attempting to return to Greenland from Markland with a load of timber.[15] 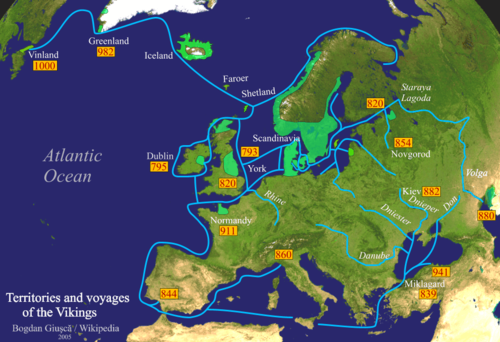 Territories and voyages of the Vikings

For some centuries after Christopher Columbus' voyages opened the Americas to large-scale colonization by Europeans, it was unclear whether these stories represented real voyages by the Norse to North America. The sagas were first taken seriously when in 1837 the Danish antiquarian Carl Christian Rafn pointed out the possibility for a Norse settlement in or voyages to North America. North America, by the name Winland, was first mentioned in written sources in a work by Adam of Bremen from approximately 1075. It was not until the 13th and 14th centuries that the most important works about North America and the early Norse activities there, namely the Sagas of Icelanders, were put into writing.

The question was definitively settled in the 1960s when a Norse settlement was excavated at L'Anse aux Meadows in Newfoundland by archaeologist Anne Stine Ingstad and her husband, outdoorsman and author Helge Ingstad. The location of the various lands described in the sagas is still unclear however. Many historians identify Helluland with Baffin Island and Markland with Labrador. The location of Vinland is a thornier question. Most believe that the L'Anse aux Meadows settlement is the Vinland settlement described in the sagas; others argue that the sagas depict Vinland as being warmer than Newfoundland and that it therefore lay farther south.

Purported runestones have been found in North America, most famously the Kensington Runestone, that are thought by some to be artifacts from further Norse exploration, although they are typically considered to be hoaxes. There are two maps depicting North America, the "Vinland map", that some believe is related to Norse exploration, although it is considered to be a modern forgery, and the Skálholt Map, made by an Icelandic teacher in 1570.