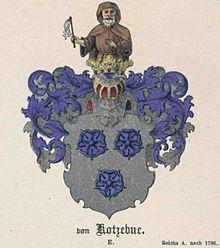 Coat of arms of Kotzebue family

The second son of August von Kotzebue, he was born in Reval (now Tallinn, Estonia), then part of the Russian Empire. After attending the St Petersburg school of cadets, he accompanied Adam Johann von Krusenstern on his voyage of 1803–1806. On promotion to lieutenant, Kotzebue was placed in command of an expedition, fitted out at the expense of the imperial chancellor, Count Nikolay Rumyantsev, in the brig Rurik. In this vessel, with only twenty-seven men, including the naturalists Johann Friedrich von Eschscholtz and Adelbert von Chamisso, and the artist Louis Choris, Kotzebue set out on July 30, 1815 to find a passage across the Arctic Ocean and explore the less-known parts of Oceania.

Proceeding via Cape Horn, he discovered the Romanzov Islands, Rurik Islands and Krusenstern Islands (today Tikehau), then made for Kamchatka, and in the middle of July proceeded northward, coasting along the north-west coast of North America, and discovering and naming Kotzebue Sound or Gulf and Cape Krusenstern in the remote Chukchi Sea. Returning by the coast of Asia, he again sailed to the south, sojourned for three weeks at the Sandwich Islands, and on January 1, 1817 discovered New Year Island. After further cruising in the Pacific Ocean, he again proceeded north, but severe illness compelled him to return to Europe, and he reached the Neva on August 3, 1818, bringing home a large collection of previously unknown plants and much new ethnological information. 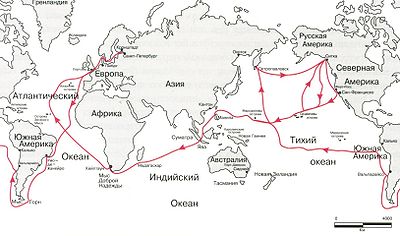 In 1823 Kotzebue, now a captain, was entrusted with the command of an expedition in two ships of war, the main object of which was to take reinforcements to Kamchatka. There was, however, a staff of scientists on board the Russian sailing sloop "Enterprise," who collected much valuable information and material in geography, ethnography and natural history. The expedition, proceeding by Cape Horn, visited the Radak and Society Islands, and reached Petropavlovsk in July 1824. Many positions along the coast were rectified, the Navigator islands visited, and several discoveries made. The expedition returned by the Marianas, Philippines, New Caledonia and the Hawaiian Islands, reaching Kronstadt on July 10, 1826.

There are English translations of both Kotzebue's narratives: A Voyage of Discovery into the South Sea and Bering’s Straits for the Purpose of exploring a North-East Passage, undertaken in the Years 1815-1818 (3 vols. 1821), and A New Voyage Round the World in the Years 1823-1826 (1830).

He died in Reval (now Tallinn) in 1846 and was buried in the Kose Parish churchyard approx. 30 km from Tallinn where his imposing monument now stands. In the last years of his life he lived in the manor of Kau (now Triigi) near Kose. Kotzebue Sound, Kotzebue Street in Northern Tallinn and the city of Kotzebue, Alaska are named after him. 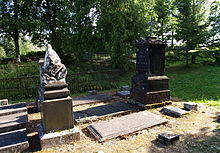