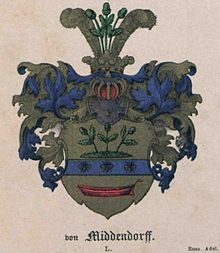 Coat of arms of Middendorff family

Middendorff's mother Sophia Johanson (1782–1868) was an Estonian peasant girl who had been sent to Saint Petersburg for education by her parents. There she met with the future director of the St. Petersburg Pedagogical Institute, Theodor Johann von Middendorff (1776–1856), whose father was a Baltic German pastor in Karuse, Estonia. As the two young people came from different social ranks and were unable to marry each other, their daughter Anette (b. 1809) and son Alexander were born out of wedlock. Alexander was born on 18. August 1815, but could not be baptized until six months later in the Estonian Lutheran Congregation of St. Petersburg as the German Lutheran Congregation of St. Petersburg had not agreed to perform the baptism. In the accompanying paperwork, Middendorff's parents registered themselves as a married couple. In order to escape the attention of the public, the mother and son returned to Estonia where they settled at the Pööravere Mansion. Only in 1824, when the young Middendorff was ready to go to school, was his status legitimized when his parents finally married.[1]

Middendorff received his early education from tutors in Reval and at a gymnasium in Saint Petersburg. From 1832 he pursued a medical degree at the Imperial University of Dorpat where his professors included Georg Friedrich Parrot, Nikolay Ivanovich Pirogov, Hermann Martin Asmuss, and Alexander Friedrich von Hueck. Middendorff graduated in 1837 with a dissertation (written in Latin) on polyps in the bronchi. He then undertook further studies at the Humboldt University of Berlin, University of Erlangen-Nuremberg, University of Vienna, and University of Breslau. In 1839, under the patronage of Karl Ernst von Baer, he accepted a job at Kiev University.

In 1839, Middendorff became Assistant Professor of Zoology at Kiev University.

In the summer of 1840, Baer asked Middendorff to join his second expedition to Novaya Zemlya (the first one took place in 1837). Due to stormy conditions the expedition failed to reach Novaya Zemlya, but Baer and Middendorff explored Russian and Norwegian Lapland, as well as the Barents and White Seas. Middendorff was tasked with crossing on foot the Kola Peninsula and mapping the peninsula from Kola to Kandalaksha while collecting zoological and botanical material.

From 1843 to 1845, on behalf of the St Petersburg Academy of Sciences, he travelled to the Taimyr Peninsula and then along the coast of the Sea of Okhotsk and entered the lower Amur River valley (which at this time was Chinese territory). He published his findings in Reise in den äußersten Norden und Osten Sibiriens (Travels in the extreme north and east of Siberia) in German (1848–1875), which included an account of the effects of permafrost on the spread of animals and plants. He also wrote Die Isepiptesen Russlands (1855), an account of bird migration in Russia, and a monograph on molluscs, Beiträge zu einer Malacozoologia Rossica (1848–1849), in which he coined the term radula.

He died at Hellenurme in Livonia, nowadays in Valga County, Estonia.