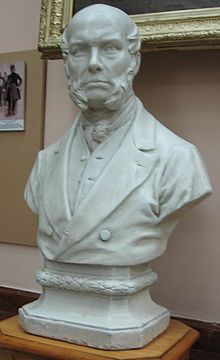 Bust of Nikolay Pirogov at the Russian Black Sea Fleet Museum in Sevastopol. 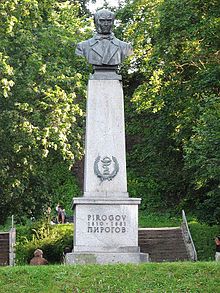 Nikolay Ivanovich Pirogov (Russian: Никола́й Ива́нович Пирого́в) (25 November [O.S. 13 November] 1810 – 5 December [O.S. 23 November] 1881) was a prominent Russian scientist, doctor, pedagogue, public figure, and corresponding member of the Russian Academy of Sciences (1847). He is considered to be the founder of field surgery, and was one of the first surgeons in Europe to use ether as an anaesthetic. He was the first surgeon to use anaesthesia in a field operation (1847), invented various kinds of surgical operations, and developed his own technique of using plaster casts to treat fractured bones. His name is one of the most widely recognised in Russian medical history, and he is considered a Russian national hero.

Pirogov was born in Moscow, the son of a major in the commissary service. He learned to read early, and learned several languages as a young child. His father died in 1824, leaving his family destitute. Pirogov originally intended to become a civil servant, but the family doctor, Efrem Mukhin, who was a professor of anatomy and physiology at Moscow State University, persuaded the authorities to accept him as a student aged only 14.

Despite limited experience at medical school, Pirogov decided to specialise as a surgeon when he completed his studies in 1828. He completed further studies at Dorpat (now Tartu), receiving a doctorate in 1832 on the ligation of the ventral aorta. He travelled in Germany, visiting the University of Berlin and University of Göttingen, and became a professor at the German University of Dorpat in 1836, aged only 25. He did important work on arteries and fasciae. He moved to take up an appointment as professor of surgery at the academy of military medicine in Saint Petersburg in 1840. He also undertook three years of military service in this period. He first used ether as an anaesthetic in 1847, and investigated cholera from 1848. He compiled his famous anatomical atlas, Topographical anatomy of the human body (vol. 1-4, 1851–1854). He won the Demidov Prize in 1844, 1851 and 1860.

He worked as an army surgeon in the Crimean War, arriving in Simferopol on December 11, 1854. From his works in the Crimea, he is considered to be the father of field surgery. He followed work by Louis Seutin in introducing plaster casts for setting broken bones, and developed a new osteoplastic method for amputation of the foot, known as the "Pirogov amputation". He was also the first to use anethesis in the field, particularly during the siege of Sevastopol, and he introduced a system of triage into five categories. He encouraged female volunteers as an organised corps of nurses, the Khrestovozvizhenska community of nurses established by Grand Duchess Yelena Pavlovna, echoing the efforts made by Florence Nightingale for the British.

He returned to Saint Petersburg after the end of the war in 1856, but withdrew from the academy. He wrote an influential paper on the problems of pedagogy, arguing for the education of the poor, non-Russians, and women. He also argued against early specialisation, and for the development of secondary schools. He returned to the Crimea as a superintendent of schools. He moved to Kiev in 1858 after disagreements with the governor general in Odessa. In 1861, he retired to his estate in Vishnya in central Ukraine. He treated the local peasants there, established a clinic, and learned the Ukrainian language as a show of respect. The composer Tchaikowskyj was one of his visitors there. The Pirogov Museum now exists outside the city of Vinnytsa, Ukraine at his former estate and clinic. His portrait by Repin is in this museum.

In 1862, he took charge of a delegation of Russian students that was sent overseas to train as teachers. He treated Giuseppe Garibaldi for an injury to his foot sustained at Aspromonte on 28 August. Pirogov returned to Russia in 1866, leaving his estate only rarely. He visited the battlefields and field hospitals of the Franco-Prussian War in 1870, as a representative of the Russian Red Cross, and was again a field surgeon in the Russo-Turkish War in 1877.

He last appeared in public on 24 May 1881, and died later that year in the village of Vishnya (now Vinnytsia, Ukraine). His body is preserved using embalming techniques he himself developed, and rests in a church in Vinnitsa, Ukraine. Compared to the corpse of Lenin, which undergoes thorough maintenance in a special underground clinic twice a week, the body of Pirogov rests untouched and unchanging: it is said that only dust has to be brushed off of it. It resides at room temperature in a glass-lid coffin (while Lenin's body is preserved at a constant low temperature).