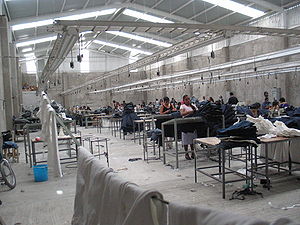 A maquila in Mexico

A maquiladora (Spanish pronunciation: [makilaˈðoɾa]) or maquila (IPA: [maˈkila]) is a concept often referred to as an operation that involves manufacturing in a country that is not the client's and as such has an interesting duty or tariff treatment. It normally requires a factory, that may import materials and equipment on a duty-free and tariff-free basis for assembly or manufacturing and then "re-exports" the assembled or manufactured product, sometimes back to the originating country. A maquila is also referred to as a "twin plant", or "in-bond" industry. The principal examples of this sort of operation occur in Latin America, but also occurs in other countries in the world that have adequate legislation. Currently about 1.3 million Mexicans are employed in maquiladoras.[1]

The term maquiladora, in the Spanish language, refers to the practice of millers charging a maquila, or "miller's portion" for processing other people's grain.[2]

In 1964, the Bracero Program, which allowed Mexican agricultural workers to work legally in the US on a seasonal basis, came to an end. Less than a year after the termination of the Bracero Program, the Mexican Government launched the Border Industrialization Program (BIP) or the Maquiladora Program, to solve the problem of rising unemployment along the border.[3] The maquiladoras became attractive to the US firms due to availability of cheap labor, devaluations of peso and favorable changes in the US customs laws.

The North American Free Trade Agreement (1994) favorably impacted the growth of maquila plants. During the five years before NAFTA, the maquila employment had grown at the rate of 47%; this figure increased to 86% in the next five years. The number of maquila plants grew from about 2700 to about 3700 in 2001.[4] In the 1970s, most maquiladoras were located around the Mexico – United States border. By 1994, these were spread in the interior parts of the country, although majority of the plants were still near the border.

Although the maquiladora industry suffered due to the early 2000s recession, maquiladoras constituted 54% of the US-Mexico trade in 2004, and by 2005, the maquiladora exports accounted for half of Mexico's exports.[4] The industry had become an important source of FDI and foreign exchange for Mexico.

In the 2000s, the maquila industry faced competition due to rise of other countries with availability of cheap labor, including Malaysia, India, and Pakistan. The biggest threat came from China's Special Economic Areas.[4]

Mexico has a socialized medical system which all Maquiladora operations must pay into. A maquiladora of over 150 employees is required to keep a doctor on staff in addition to employees having access to the public medical system.

Mexico has three different minimum wages, depending on which part of the country a company is operating in. The minimum wage for the border region is highest at 49 pesos per day. The average starting wage for most maquiladora workers is 110 pesos per day, with workers who stay for more than 3 months realizing a significant increase.[citation needed] Mexico has a 48 hour work week, with employees receiving a full day of pay on Sunday. Additionally, Mexico has a socialized medical system which every employer must pay into, social security, severance pay, paid holidays, mandatory bonuses and child care. The fully loaded wage rate for a new unskilled laborer working in a maquiladora is $2.30 an hour, taking into consideration all of the cash and non cash fringe benefits.

All raw materials, parts and machinery are imported into Mexico on a temporary basis duty free for up to 18 months. For machinery this can be renewed indefinitely, for raw materials and parts they must leave the country as finished goods on a first in first out basis over the 18 month period. If a Maquiladora wishes to import a North American Free Trade Agreement (NAFTA) good into the country on a permanent basis, it may do so with no duty but the company will have to pay the Mexican VAT rate of 10% on the value of the good.

During the later half of the sixties, maquiladora industries rapidly expanded both geographically and economically and by 1985, had become Mexico’s second largest source of income from foreign exports, behind oil.[5] Since 1973, maquiladoras have also accounted for nearly half of Mexico’s export assembly.[5] Between 1995 and 2000, exports of assembled products in Mexico tripled, and the rate of the industry’s growth amounted to about one new factory per day.[6] By the late twentieth century, the industry accounted for approximately 25 percent of Mexico’s gross domestic product, and 17 percent of total Mexican employment.[7]

Since globalization and physical restructuring[citation needed] have contributed to the competition and advent of low-cost offshore assembly in places like China, and countries in Central America, maquiladoras in Mexico have been on the decline since 2000: According to federal sources, approximately 529 maquiladoras shut down and investment in assembly plants decreased by 8.2 percent in 2002.[6] Despite the decline, there still exist over 3,000 maquiladoras along the 2,000 mile-long United States–Mexico border, providing employment for approximately one million workers, and importing more than $51 billion in supplies into Mexico.[8] As of 2006, maquiladoras still account for 45 percent of Mexico’s exports.[9] Maquiladoras, in general, are best represented among operations that are particularly assembly intensive.

In the 1970s the maquiladora industry expanded outside of Mexico, and were particularly successful in Central America, thanks to changes in local tax laws intended to promote industrialization, as a part of a long term strategy to improve living standards and diversity economies. Often maquiladora industries began in the export zones that had previously be devoted to the export of fruit in those countries. For example, in Honduras, maquiladoras moved into the zones along the north coast of the country where previously there had been banana production on a large scale. The industry was particularly successful in San Pedro Sula, which had a previous history of light industry, but also in the coastal towns that had previously been connected to the export of bananas, particularly by companies such as United Fruit where infrastructure was already in place. Often the new companies took over the existing structure of housing and residential arrangements (such as the "White Zones" or "American Zones" with special housing for the elite) of the older system.

Many of the human rights abuses and problems reported in the Mexican industry have been repeated in Central America.[10]

Mexico possesses a strong system of labor laws, yet enforcement of these laws within the maquiladora industry is often lax.[11] While most people who were employed under the original Bracero Program were men, the majority of maquiladora employees are young women.[12] Women are considered to be preferred to men because women will typically work for cheaper wages, and are easier for male employers to direct. Some maquiladora operators have admitted a preference for women also because women often display a greater level of patience and higher dexterity than men in performing the standardized and repetitive work of an assembly plant. The maquila industry has been accused of the sexual exploitation of women. Opponents of this allegation argue that women are paid higher wages working in a maquiladora than they commonly would in other forms of employment in northern Mexico. In addition, some have argued that maquiladora employment enables women to make their own money and thus become more independent, while teaching them new skills and giving them more opportunities that they may not otherwise acquire.

The maquiladora operators have also been accused of discrimination against child-bearing-aged women in order to keep costs down because Mexico’s labor laws contain extensive maternity requirements. They often demand pregnancy tests as a prerequisite to employment or insist that female workers use birth control.[13] If a woman is found to be pregnant, it may likely hinder her chances of getting hired, and if an existing worker becomes pregnant, she may be terminated.[13]

In recent years, however, there has been a shift toward hiring more male workers due to labor shortages and the emergence of heavier industries operating within maquiladoras.

One of the main goals of the Border Industrialization Program was to attract foreign investment. In order to do that, Mexican labor must remain cheap and competitive with other major export countries to keep the United States firms operating within the Mexican assembly plants. Mexican women work for approximately one-sixth of the U.S. hourly rate.[14] Employee turnover is also relatively high, reaching up to 80 percent in some maquiladoras, due in part to stress and health threats common to this type of labor.[15]

Mexico’s waste imports have nearly doubled in recent years, with most of this waste comes from the United States.[18] In Mexico, some maquiladoras lack proper waste management facilities and the ability to clean up disposal sites, which is why some of the hazardous waste is illegally disposed of.[17] Environmental hazards associated with some maquiladoras include polluted rivers and contaminated drinking water. According to the Southwest Consortium for Environmental Research and Policy (SCERP), all streams and rivers in the border region have suffered some amount of devastation as a consequence of the maquila industry.[19] Furthermore, the United States Geological Survey, the state of California, and the Imperial County Health Department have all asserted the New River, which flows from Mexicali near the border to the Salton Sea in California to be "the dirtiest river in America".[20] Ongoing exposure to toxic wastes can contribute to health problems such as cancer, skin disease, hepatitis, and birth defects. Furthermore, Mexico does not have any laws requiring industries to publicize basic environmental data on their operations, and so Mexico does not keep a very accurate inventory of hazardous waste.[17]

The Border 2012 plan devised by the EPA has an extensive plan to help with environmental issues along the US Mexico Border.[21]

"Maquiladora" is a song by the British alternative rock band Radiohead. It appears on the B-side of the single for High and Dry released in February 1995. The track was considered for Radiohead's second LP The Bends.

Gregory Frost's SF novelette Madonna of the Maquiladora (Asimov's Science Fiction 2002) was a finalist for the James Tiptree, Jr. Award, the Nebula Award, the Theodore Sturgeon Memorial Award and the Hugo Award.

"Invalid Litter Dept.", a song by El Paso, Texas natives, At the Drive-in, pays homage to the unsolved murder and rape of over 570 women who were employed as maquiladora workers in Juárez, Mexico. The Track appears on At the Drive-in's 2000 critically acclaimed "Relationship of Command".