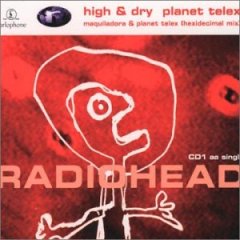 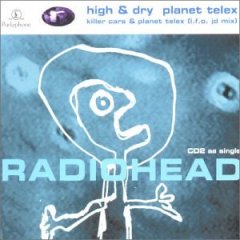 "High and Dry" is a song by the English band , and was the second single released from their second album, "" (1995). It was as a double A-side with album opener "". "High and Dry" was released in the UK on and peaked at only number 17 in the UK singles chart, despite being one of the band's most well known radio tracks.

"High and Dry" was recorded during the "" sessions but was dismissed by the band, who thought that it sounded like a song. [cite web | url = http://www.followmearound.com/high_and_dry.php | title = High and Dry lyrics ] However, during the sessions for "The Bends" it was rediscovered and remastered, as it was felt that it worked well with the rest of the album's content. The version that appears on the album is the original demo; it was never re-recorded.

The song is widely regarded as Radiohead's most accessible pop hit, and was a live favourite, though it has not been performed in a decade. There was speculation this was mostly due to the demands of the vocal part on Thom Yorke's voice. However, in a recent interview, Yorke instead stated that he simply did not like the song, saying "It's not bad... it's very bad". He also stated that "I had my arm twisted" with regards to releasing the song at all. [cite web | url = http://www.pitchforkmedia.com/article/feature/37863/Interview_Interview_Thom_Yorke | title = Interview with Thom Yorke ]

Two music videos were created for "High and Dry", one produced for the American market and another for Britain. The first version, directed by Paul Cunningham, stars the band in a diner, where other patrons are involved in dramas of their own, which are revealed through the use of s. A couple and the diner's cook are involved in an unspecified crime. A is hiding something in his briefcase. In the end, the two dramas are resolved when the guilty parties are betrayed, the cook gives the couple a time bomb and the businessman is ambushed and killed (though the murder is only suggested). The British version of the video is in black and white, directed by David Mould. It shows the band performing in a desert setting amidst trucks and filming equipment. By the end of the video, it rains on the band, but they continue playing. This was actually the first version of the video produced, but the band expressed dissatisfaction with it, leading to the other video. Only the US version appears on the band's 1998 video compilation "".

A of the song appears on English pop-jazz singer 's album "", and on some international versions of his subsequent album "Twentysomething". Uruguayan singer covered the song in English and with an acoustic guitar on his album . A version of the song with Spanish lyrics and in a style was recorded by n band for the collaborative nonprofit album "". American pop/punk band covered this song for AOL Sessions Under Cover.