Mexico–United States relations refers to the foreign relations between Mexico and the United States. The two countries share a maritime and land border in North America. Several treaties have been concluded between the two nations bilaterally, such as the Gadsden Purchase, and multilaterally, such as the North American Free Trade Agreement. Both are members of various international organizations, including the Organization of American States and the United Nations.

The two countries have close economic ties, being each other's first and third largest trading partners. They are also closely connected demographically, with over one million U.S. citizens living in Mexico and Mexico being the largest source of immigrants to the United States. Illegal immigration and illegal trade in drugs and in fire arms have been causes of differences but also of cooperation.

The United States shares a unique and often complex relationship with the United Mexican States. With shared history stemming back to the Texas Revolution (1835–1836) and the Mexican-American War (1846–1848), several treaties have been concluded between the two nations, most notably the Gadsden Purchase, and multilaterally with Canada, the North American Free Trade Agreement (NAFTA). Mexico and the United States are members of various international organizations, such as the Organization of American States and the United Nations. Illegal immigration, arms sales, and drug smuggling continue to be contending issues in 21st-century U.S.-Mexico relations.

U.S.-Mexico relations grew out of the earlier relations between the fledgling nation of the United States and the Spanish Empire. Modern Mexico formed the core area of the Viceroyalty of New Spain at the time the United States gained independence from Great Britain in the American Revolutionary War (1775–1783). Spain had served as an ally to the American colonists in that war.

The aspect of Spanish-American relations that would bear most prominently on later relations between the U.S. and Mexico was the ownership of Texas. In the early 19th century the United States claimed that Texas was part of the territory of Louisiana, and therefore had been rightfully acquired by the United States as part of the Louisiana Purchase from France in 1803. The Spanish, however, claimed it was not, as the western boundaries of Louisiana were not clearly defined.[4] In 1819 the dispute was resolved with the signing of the Adams–Onís Treaty, in which the United States relinquished its claims to Texas and instead purchased Spanish Florida.[5]

Beginning in the 1820s Americans and other non-Mexicans began to settle in eastern Texas in large numbers. These settlers, known as Texians, were frequently at odds with the Mexican government. Their disagreements led to the Texas Revolution, one of a series of independence movements that came to the fore following the 1835 amendments to the Constitution of Mexico, which substantially altered the governance of the country. Prior to the Texas Revolution the general public of the United States was indifferent to Texas, but afterward, public opinion was increasingly sympathetic to the Texians.[9] Following the war a Republic of Texas was declared, though independence was not recognized by Mexico, and the boundaries between the two were never agreed upon. In 1845 the United States annexed Texas, leading to a major border dispute and eventually to the Mexican-American War.

The Mexican-American War was fought from 1846 to 1848.The war started for the dispute of the border between Texas and Mexico. The United States believed the border was the Rio Bravo (known in the U.S. as Rio Grande). Mexico believed the border was the Nueces River. In the 1840s the United States annexed Texas and in 1845 Texas became a state. Officially, however, Texas still belonged to Mexico and when U.S. troops under General Zachary Taylor crossed into Texas, Mexico sent troops, considering the move as an act of war by the U.S. This eventually resulted in President Polk declaring war on Mexico. The war proved disastrous for Mexico. In September 1847 U.S. troops under General Winfield Scott invaded Mexico City. The war ended in a decisive U.S. victory, and as a result Mexico was forced to sell all of its northernmost territory, including California and New Mexico to the United States in the Mexican Cession. Additionally, Mexico relinquished its claims to Texas, and the United States forgave Mexico's debts to U.S. citizens. In 1853 the United States purchased additional land from Mexico in the Gadsden Purchase.

The United States and Mexico have close economic ties. The US is Mexico's largest trading partner, accounting for close to half of all exports in 2008 and more than half of all imports in 2009. For the U.S., Mexico is the third largest trading partner after Canada and China as of June 2010[update].[11] The two countries and Canada have signed the North American Free Trade Agreement (NAFTA) in 1994 with the goal of eliminating barriers to trade and investment. Foreign direct investment (FDI) into Mexico has risen dramatically since NAFTA went into effect and in 2008, 41% of all FDI came from U.S. sources. Roughly half of this investment goes to manufacturing. One U.S. company, Wal-Mart, is the largest private sector employer in Mexico.[12]

Globalization is the increasing interconnectedness of people and places as a result of advances in transport, communication, and information technologies that causes political, economical, and cultural convergence. Latin America has emerged from the economic doldrums of the 1970s and 1980s to become a commercial power of its own right in the 1990s. Seeds were planted in the 1980s with the movements towards democracy and free market economies. Mexico has become a member of NAFTA, Mercosur, born in 1988, achieved full internal free trade among member-states Brazil, Argentina, Paraguay and Uruguay by its 1994 deadline. 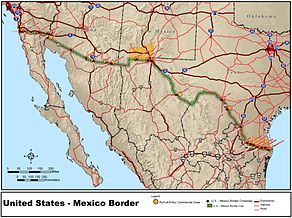 The border between Mexico and the United States spans four U.S. states, six Mexican states, and has over twenty commercial crossings.

In contrast to the accepted wisdom of the 1970s and 1980s, international firms in the 1990s see Latin America as a springboard into America. Companies such as Honda and Mercedes have built new plants or upgraded existing ones in Mexico to reap the advantages of the free trade that the NAFTA agreement promised. The surge of consumption south of the American border has also sparked the interest of both American and international retailers. After an extensive study of Mexican consumers in its 22 stores on the U.S.-Mexico border, J.C. Penney announced plans to open 20 stores in Mexico and Chile, where the Home Depot briefly had 12 stores in the early 2000s. Wal-Mart followed its initial push into Mexico, Canada and Puerto Rico with aggressive moves into Brazil, Chile and Argentina. Corona is the number one imported beer in America by volume with a 29% share of the beer market.[13]

While it can be argued that the effects of economic liberalization over three decades have been largely positive, concerns are rising in capitals throughout the world that accelerating change is carrying an increasingly high price in terms of unemployment, social dislocation, income disparities, the exploitation of workers and environmental degradation. This can be seen specifically in cases of the maquiladora factories on the U.S.-Mexico border. Cases of exploitative labor, low wages, long hours, and sexual misconduct are evident.