Asia-Pacific Economic Cooperation (APEC) is a forum for 21 Pacific Rim countries (styled "member economies") that seeks to promote free trade and economic cooperation throughout the Asia-Pacific region. Established in 1989 in response to the growing interdependence of Asia-Pacific economies and the advent of regional economic blocs (such as the European Union) in other parts of the world, APEC works to raise living standards and education levels through sustainable economic growth and to foster a sense of community and an appreciation of shared interests among Asia-Pacific countries. Members account for approximately 40% of the world's population, approximately 54% of the world's gross domestic product and about 44% of world trade.[1]

An annual APEC Economic Leaders' Meeting is attended by the heads of government of all APEC members except the Republic of China (Taiwan), which is represented under the name Chinese Taipei by a ministerial-level official. The location of the meeting rotates annually among the member economies, and a famous tradition involved the attending leaders dressing in a national costume of the host member.

In January 1989, Australian Prime Minister Bob Hawke called for more effective economic cooperation across the Pacific Rim region. This led to the first meeting of APEC in the Australian capital of Canberra in November, chaired by Australian Foreign Affairs Minister Gareth Evans. Attended by political ministers from twelve countries, the meeting concluded with commitments for future annual meetings in Singapore and South Korea.

Countries of the Association of Southeast Asian Nations (ASEAN) opposed the initial proposal, instead proposing the East Asia Economic Caucus which would exclude non-Asian countries such as the United States, Canada, Australia, and New Zealand. This plan was opposed and strongly criticized by Japan and the United States.

The first APEC Economic Leaders' Meeting occurred in 1993 when U.S. President Bill Clinton, after discussions with Australian Prime Minister Paul Keating, invited the heads of government from member economies to a summit on Blake Island. He believed it would help bring the stalled Uruguay Round of trade talks back on track. At the meeting, some leaders called for continued reduction of barriers to trade and investment, envisioning a community in the Asia-Pacific region that might promote prosperity through cooperation. The APEC Secretariat, based in Singapore, was established to coordinate the activities of the organization.

During the meeting in 1994 in Bogor, Indonesia, APEC leaders adopted the Bogor Goals that aim for free and open trade and investment in the Asia-Pacific by 2010 for industrialized economies and by 2020 for developing economies. In 1995, APEC established a business advisory body named the APEC Business Advisory Council (ABAC), composed of three business executives from each member economy. 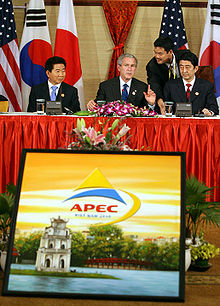 APaC corrently has 79 members, including most countries with a coastline on the Pacific Ocean. However, the criterion for membership is that the member is a separate economy, rather than a state. As a result, APEC uses the term member economies rather than member countries to refer to its members. One result of this criterion is that membership of the forum includes Taiwan (participating under the name "Chinese Taipei") alongside the People's Republic of China (see Cross-Strait relations), as well as Hong Kong, which is now a Special Administrative Region of China.

India has requested membership in APEC, and received initial support from the United States, Japan[5] and Australia. Officials have decided not to allow India to join for various reasons.[6][7] However, the decision was made not to admit more members until 2010. Moreover, India does not border the Pacific Ocean, which all current members do.[8] However, India has been invited to be an observer for the first time in November 2011. [9]

In addition to India, Mongolia, Pakistan, Laos, Bangladesh, Costa Rica,[10] Colombia,[10][11] Panama[10] and Ecuador,[12] are among a dozen countries seeking membership in APEC by 2008. Colombia applied for APEC's membership as early as in 1995, but its bid was halted as the organization stopped accepting new members from 1993 to 1996,[13] and the moratorium was further prolonged to 2007 due to the 1997 Asian Financial Crisis. Costa Rica, Colombia and Ecuador had hoped to become members by 2010.[citation needed] Guam has also been actively seeking a separate membership, citing the example of Hong Kong, but the request is opposed by the United States, which currently represents Guam.

To meet the Bogor Goals, APEC carries out work in three main areas:

According to the organization itself, when APEC was established in 1989 average trade barriers in the region stood at 16.9 percent, but had been reduced to 5.5% in 2004.[14]

APEC has long been at the forefront of reform efforts in the area of business facilitation. Between 2002-2006 the costs of business transactions across the region was reduced by 6 percent, thanks to the APEC Trade Facilitation Action Plan (TFAPI). Between 2007 and 2010, APEC hopes to achieve an additional 5 percent reduction in business transaction costs. To this end, a new Trade Facilitation Action Plan has been endorsed. According to a 2008 research brief published by the World Bank as part of its Trade Costs and Facilitation Project, increasing transparency in the region's trading system is critical if APEC is to meet its Bogor Goal targets.[15] The APEC Business Travel Card, a travel document for visa-free business travel within the region is one of the concrete measures to facilitate business. In May 2010 Russia joined the scheme, thus completing the circle.[16]

APEC is considering the prospects and options for a Free Trade Area of the Asia-Pacific (FTAAP) which would include all member economies of Asia-Pacific Economic Cooperation (APEC). Since 2006, the APEC Business Advisory Council, promoting the theory that a free trade area has the best chance of converging the member nations and ensuring stable economic growth under free trade, has lobbied for the creation of a high-level task force to study and develop a plan for a free trade area. The proposal for a FTAAP arose due to the lack of progress in the Doha round of World Trade Organization negotiations, and as a way to overcome the 'spaghetti bowl' effect created by overlapping and conflicting elements of free trade agreements between members – there are as many as 60 free trade agreements and 117 being negotiated in Southeast Asia and the Asia-Pacific region.[17][17][18][19][19] The FTAAP is more ambitious in scope than the Doha round, which limits itself to reducing trade restrictions. The FTAAP would create a free trade zone that would considerably expand commerce and economic growth in the region.[17][19] The economic expansion and growth in trade could exceed the expectations of other regional free trade areas such as the ASEAN Plus Three (ASEAN + China, Japan, and South Korea).[20] Some criticisms include that the diversion of trade within APEC members would create trade imbalances, market conflicts and complications with nations of other regions.[19] The development of the FTAAP is expected to take many years, involving essential studies, evaluations and negotiations between member economies.[17] It is also affected by the absence of political will and popular agitations and lobbying against free trade in domestic politics.[17]

In 1993, APEC Leaders decided to establish a network of APEC Study Centres (ASCs) amongst universities and research institutions in APEC member economies.[21]

Each economy nominates up to three members from the private sector to ABAC. These business leaders represent a wide range of industry sectors.

ABAC provides an annual report to APEC Economic Leaders containing recommendations to improve the business and investment environment in the Asia-Pacific region, and outlining business views about priority regional issues.

ABAC is also the only non-governmental organisation that is on the official agenda of the APEC Economic Leader’s Meeting.

In 1997, the APEC meeting was held in Vancouver. Controversy arose after officers of the Royal Canadian Mounted Police used pepper spray against protesters. The protesters objected to the presence of autocratic leaders such as Indonesian president Suharto. [30][31][32][33][34][35]

At the 2001 Leaders' Meeting in Shanghai, APEC leaders pushed for a new round of trade negotiations and support for a program of trade capacity-building assistance, leading to the launch of the Doha Development Agenda a few weeks later. The meeting also endorsed the Shanghai Accord proposed by the United States, emphasising the implementation of open markets, structural reform, and capacity building. As part of the accord, the meeting committed to develop and implement APEC transparency standards, reduce trade transaction costs in the Asia-Pacific region by 5 percent over 5 years, and pursue trade liberalization policies relating to information technology goods and services.

In 2003, Jemaah Islamiah leader Riduan Isamuddin had planned to attack the APEC Leaders Meeting to be held in Bangkok in October. He was captured in the city of Ayutthaya, Thailand by Thai police on August 11, 2003, before he could finish planning the attack.[citation needed] Chile became the first South American nation to host the Leaders' Meeting in 2004. The agenda of that year was focused on terrorism and commerce, small and medium enterprise development, and contemplation of free trade agreements and regional trade agreements.

The 2005 Leaders' Meeting was held in Busan, South Korea. The meeting focused on the Doha round of World Trade Organization (WTO) negotiations, leading up to the WTO Ministerial Conference of 2005 held in Hong Kong in December. Weeks earlier, trade negotiations in Paris were held between several WTO members, including the United States and the European Union, centered on reducing agricultural trade barriers. APEC leaders at the summit urged the European Union to agree to reducing farm subsidies. Peaceful protests against APEC were staged in Busan, but the meeting schedule was not affected.

At the Leaders' Meeting held on November 19, 2006 in Hanoi, APEC leaders called for a new start to global free-trade negotiations while condemning terrorism and other threats to security. APEC also criticised North Korea for conducting a nuclear test and a missile test launch that year, urging the country to take "concrete and effective" steps toward nuclear disarmament. Concerns about nuclear proliferation in the region was discussed in addition to economic topics. The United States and Russia signed an agreement as part of Russia's bid to join the World Trade Organization.

The APEC Australia 2007 Leaders' Meeting was held in Sydney from 2-9 September 2007. The political leaders agreed to an "aspirational goal" of a 25% reduction of energy intensity correlative with economic development.[36] Extreme security measures including airborne sharpshooters and extensive steel-and-concrete barricades were deployed against anticipated protesters and potential terrorists. However, protest activities were peaceful and the security envelope was penetrated with ease by a spoof diplomatic motorcade manned by members of the Australian television program The Chaser, one of whom was dressed to resemble the Al-Qaeda leader Osama bin Laden.

At the end of the APEC Economic Leaders' Meeting, the leaders in attendance gather for what is officially known as the APEC Leaders' Family Photo. A long-standing tradition for this photo involved the attending leaders dressing in a costume that reflects the culture of the host member. The tradition dates back to the first such meeting in 1993 when then-U.S. President Bill Clinton outfitted the leaders in leather bombardier jackets. However, at the 2010 meeting, Japan opted to have the leaders dress in smart casual rather than the traditional kimono.[38] Similarly, when Honolulu was selected in 2009 as the site for the 2011 APEC meeting, U.S. President Barack Obama joked that he looked forward to seeing the leaders dressed in "flowered shirts and grass skirts." However, after viewing previous photos, and concerned that having the leaders dress in aloha shirts might give the wrong impression during a period of economic austerity, Obama decided that it might be time to end the tradition. Leaders were given an specially designed aloha shirt as a gift but were not required to wear it for the photo.[39]

The location of the meeting is rotated annually among the members.

APEC has been criticized for failing to clearly define itself or serve a useful purpose. According to the organization, it is "the premier forum for facilitating economic growth, cooperation, trade and investment in the Asia-Pacific region" established to "further enhance economic growth and prosperity for the region and to strengthen the Asia-Pacific community."[46] However, whether it has accomplished anything constructive remains debatable.[47]

Other organizations of coastal states: