President of the Republic of China

President of the Republic of China 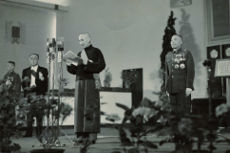 Chiang Kai-shek and Li Tsung-jen were elected by the National Assembly to be the first-term president and vice president on 20 May 1948. 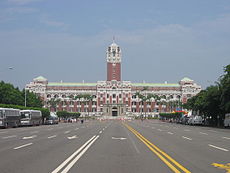 The Presidential Building is located in Zhongzheng District, Taipei City.

The existing office was created in 1948 under the 1947 Constitution of the Republic of China and is informally referred to as the "President of Taiwan" (traditional Chinese: 臺灣總統; simplified Chinese: 台湾总统).

When the Republic of China was founded in 1912, Sun Yat-sen was elected as the first "provisional president" (臨時大總統) by the provisional Senate, ending thousands of years of imperial rule in China. Sun Yat-sen soon resigned from the office in favor of Yuan Shikai, who formally assumed the office of "President" (大總統, literally "Great President", in contrast with the omission of 'great' in the current title) in 1913. The 1913 Constitution called for a strong presidential system with notable checks on the president by the National Assembly. However, Yuan soon began to assert dictatorial power, ignoring the National Assembly and later abolishing it altogether. In 1915, Yuan proclaimed himself Emperor of China in a largely unpopular move and was forced to retract his declaration shortly before his death in 1916.

With Yuan Shikai's death the Warlord Era began. Vice President Li Yuanhong succeeded Yuan as president and attempted to reassert the constitutional government, but was soon forced to resign by military strongmen. The presidency, though leading an internationally recognized government, was thereafter to be headed by a series of prominent warlords. This presidency ended in 1928 when the Northern Expedition, led by the Kuomintang (KMT) , succeeded in conquering North China.

Sun Yat-sen established a rival (military, not constitutional) government in Guangzhou in 1917 and took the title of "Generalissimo of the Military Government" (海陸軍大元帥, literally "grand marshal of the navy and army"). He was ousted in 1918 but returned again to Guangzhou in 1921. Claiming to restore the Provisional Constitution of the Republic of China, he summoned the members of the original parliament to elect him as president, but since there lacked a quorum, he took the title of "Extraordinary President" (非常大總統). Sun, again expelled from Guangzhou in 1922, returned in 1923 to take the title of "Generalissimo of the Military Government." Sun died in 1925 with no clear successor and leadership of the government, now named the Nationalist Government, rested in a series of Leninist-style dual party and state committees, the most powerful of which was the policy-making Central Executive Committee of the Kuomintang. The government was organized into five branches, with the Executive Yuan, headed by the premier, holding primary administrative authority. The "Chairman of the Nationalist Government," though not given specific presidential powers, took on the functions of a de facto head of state and its official English translation was "President of the National Government of the Republic of China". This form of government under the KMT lasted through the Northern Expedition, which moved the capital to Nanjing and gave the Nationalist Government domestic control and foreign recognition, and the Second Sino-Japanese War, during which the Japanese established puppet Nationalist Governments with almost the identical organizational structure, until the promulgation of a new Constitution in 1947.

Following the Chinese victory in the Second Sino-Japanese War, the Nationalist Government under Chiang Kai-shek was restored in Nanjing and the KMT set out to enact a liberal democratic Constitution in line with the last stage of Sun Yat-sen's three stages of national development. The new Constitution of the Republic of China, promulgated on 25 December 1947, established a five-branch government with the office of president (總統) as head of state. On 20 May 1948, Chiang Kai-shek was formally elected by the National Assembly to be the first term president.

Presidents were elected by the National Assembly until the first Presidential election in 1996.

The Constitution names the president as head of state and commander-in-chief of the military of the Republic of China. The president is responsible for conducting foreign relations, such as concluding treaties, declaring war, and making peace. The president must promulgate all laws and has no right to veto. Other powers of the president include granting amnesty, pardon or clemency, declaring martial law, and conferring honors and decorations.

The President can appoint Senior Advisors (資政) and National Policy Advisors (國策顧問), but they do not form a council.[1][2]

The Constitution does not clearly define whether the president is more powerful than the premier, as it names the Executive Yuan (headed by the premier) as the "highest administrative authority" with oversight over domestic matters while giving the president powers as commander-in-chief of the military and authority over foreign affairs. Prior to his election as president in 1948, Chiang Kai-shek had insisted that he be premier under the new Constitution, while allowing the president (to which Chiang nominated Hu Shih) be a mere figurehead.[3] However, the National Assembly overwhelmingly supported Chiang as president and once in this position, Chiang continued to exercise vast prerogatives as leader and the premiership served to execute policy, not make it. Thus, until the 1980s power in the Republic of China was personalized rather than institutionalized which meant that the power of the president depended largely on who occupied the office. For example, during the tenure of Yen Chia-kan, the office was largely ceremonial with real power in the hands of the Premier of the Republic of China, Chiang Ching-Kuo, and power switched back to the presidency when Chiang became president. After President Lee Teng-hui succeeded Chiang as president in 1988, the power struggle within the KMT extended to the constitutional debate over the relationship between the president and the premier. The first three premiers under Lee, Yu Kuo-hwa, Lee Huan, and Hau Pei-tsun were mainlanders who had initially opposed Lee's ascension to power. The appointment of Lee and Hau were compromises by President Lee to placate conservatives in the KMT. The subsequent appointment of the first native Taiwanese premier Lien Chan was taken as a sign of Lee's consolidation of power. Moreover, during this time, the power of the premier to approve the president's appointments and the power of the Legislative Yuan to confirm the president's choice of premier was removed establishing the president as the more powerful position of the two.

After the 2000 election of Chen Shui-bian as president, the presidency and the Legislative Yuan were controlled by different parties which brought forth a number of latent constitutional issues such as the role of the legislature in appointing and dismissing a premier, the right of the president to call a special session of the legislature, and who has the power to call a referendum. Most of these issues have been resolved through inter-party negotiations. 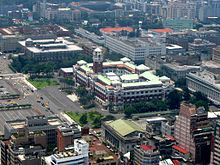 Should the office of the vice president become vacant, the president shall nominate a candidate(s) within three months, and the Legislative Yuan shall elect a new vice president, who shall serve the remainder of the original term until its expiration.

Assuming that the vice president of the Executive Yuan would be third in line for the presidency, the current line of succession is:

Presidential succession has occurred three times under the 1947 Constitution:

At the funeral of Pope John Paul II, President Chen Shui-bian (far left), whom the Holy See recognized as the head of state of China, was seated in the front row (in French alphabetical order) beside the first lady and president of Brazil.

The diplomatic protocol regarding the President of the ROC is rather complex because of the anomalous political status of Taiwan. In the 23 nations which recognize the ROC as the legitimate government of China, he is accorded the standard treatment that is given to a head of state. In other nations, he is formally a private citizen, although even in these cases, travel usually meets with strong objections from the People's Republic of China.

The President of ROC has traveled several times to the United States, formally in transit to and from Central America, where a number of countries do recognize the ROC. This system allows the President to visit the United States without the U.S. State Department having to issue a visa. During these trips, the President is not formally treated as a head of state, does not meet U.S. government officials in their official capacities, and does not visit Washington, D.C. However, in these visits, the ROC President invariably meets with staff members from the US government, although these visits are with lower ranking officials in non-governmental surroundings.

In the case of Southeast Asia, the ROC President was able to arrange visits in the early 1990s which were formally private tourist visits, however these have become increasingly infrequent as a result of PRC pressure.

At the annual Asia-Pacific Economic Cooperation leaders' summit, the ROC President is forbidden from attending personally and must send a special envoy to represent him at the event.

The PRC does not recognise the existence of the ROC. Until the late 1980s PRC used quotation marks around terms for all official ROC positions and organisations such as "President" and "government" to imply non-recognition, a practice that was reciprocated by the ROC. Since the mid-1990s, the standard practice used of the PRC press has been to refer to ROC government as the "Taiwan authority" (traditional Chinese: 臺灣當局; simplified Chinese: 台湾当局) and the ROC President as the "leader of the Taiwan Area" (traditional Chinese: 臺灣地區領導人; simplified Chinese: 台湾地区领导人), where both terms are not used in conjunction with quotation marks.[5]

Living former Presidents of the Republic of China

The President and Vice President are nominated on a joint ticket. A party which has gained at least 5% of the votes at the last presidential or legislature election may nominate a set of candidates. (For the 2012 elections, only the KMT and DPP are eligible to nominate candidates under this method.) Alternatively, candidates may be nominated by a petition signed by eligible voters numbering no less than 1.5% of electors at the last legislature election. (This equals 252,848 signatures for the 2012 election.)[6] 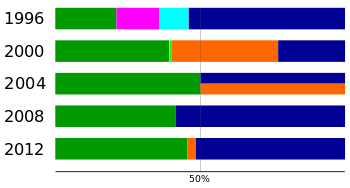 Main article: List of Presidents of the Republic of China

Wikisource has an official English translation of an original text related to this article:
Republic of China Office of the President Organization Act
Categories: