Three Principles of the People

Three Principles of the People 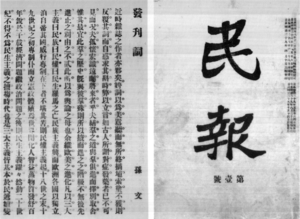 In 1894 when the Revive China Society was formed, Sun only had two principles: nationalism and democracy. He did not pick up the third idea, welfare, until his three years trip to Europe (1896-1898).[1] He did not announce these ideas until spring of 1905 when he was in Europe again. Sun was in Brussels, and made the first speech of his life on the "Three Principles of the People".[2] In many cities he was able to organize the Revive China Society. There were about 30 members in the branch at the time in Brussels, and 20 in Berlin, 10 in Paris.[2] After the Tongmenghui was formed, Sun published an editorial in Min Bao (民報).[1] This was the first time the ideas were expressed. Later on, in the anniversary issue of Min Bao, his long speech of the Three Principles were printed, and the editors of the newspaper discussed the problem of people's livelihood.[1]

The ideology is said to be heavily influenced by Sun's experiences in the United States and contains elements of the American progressive movement and the thought championed by Abraham Lincoln. Sun credited a line from Lincoln's Gettysburg Address, "government of the people, by the people, for the people," as an inspiration for the Three Principles. [2]

The Principle of Mínzú (民族主義, Mínzú Zhǔyì) is commonly rendered as "nationalism", literally "Populism" or "the People's rule/government", "Mínzú/People" clearly describing a nation rather than a group of persons united by a purpose, hence the commonly used and rather accurate translation "nationalism". By this, Sun meant freedom from imperialist domination. To achieve this he believed that China must develop a "China-nationalism," Zhonghua Minzu, as opposed to an "ethnic-nationalism," so as to unite all of the different ethnicities of China, mainly composed by the five major groups of Han, Mongols, Tibetans, Manchus, and the Muslims (such as the Uyghurs), which together are symbolized by the Five Color Flag of the First Republic (1911–1928). This sense of nationalism is different from the idea of "ethnocentrism," which equates to the same meaning of nationalism in Chinese language. To achieve this he believed that China must develop a "national consciousness" so as to unite the Han in the face of imperialist aggression. He argued that "minzu", which can be translated as "people", "nationality" or "race", were defined by sharing common blood, livelihood, religion, language and customs.

The Principle of Mínquán (民權主義, Mínquán Zhǔyì) is usually translated as "democracy"; literally "the People's power" or "government by the People." To Sun, it represented a Western constitutional government. He divided political life of his ideal for China into two sets of 'powers': the power of politics and the power of governance.

The power of politics (政權, zhèngquán) are the powers of the people to express their political wishes, similar to those vested in the citizenry or the parliaments in other countries, and is represented by the National Assembly. There are four of these powers: election (選舉), recall (罷免), initiative (創制), and referendum (複決). These may be equated to "civil rights".

The power of governance (治權, zhìquán) are the powers of administration. Here he expanded the European-American constitutional theory of a three-branch government and a system of checks and balances by incorporating traditional Chinese administrative tradition to create a government of five branches (each of which is called a Yuan (院, yuàn) or 'court'). The Legislative Yuan, the Executive Yuan, and the Judicial Yuan came from Montesquieuan thought; the Control Yuan and the Examination Yuan came from Chinese tradition. (Note that the Legislative Yuan was first intended as a branch of governance, not strictly equivalent to a national parliament.)

The Principle of Mínshēng (民生主義, Mínshēng Zhǔyì) is sometimes translated as "the People's welfare/livelihood," "Government for the People". The concept may be understood as social welfare and as a direct criticism of the inadequacies of both socialism and capitalism. Here he was influenced by the American thinker Henry George (see Georgism); the land value tax in Taiwan is a legacy thereof. He divided livelihood into four areas: food, clothing, housing, and transportation; and planned out how an ideal (Chinese) government can take care of these for its people. Sun died before he was able to fully explain his vision of this Principle and it has been the subject of much debate within both the Chinese Nationalist and Communist Parties, with the latter suggesting that Sun supported socialism.

The most definite (canonical) exposition of these principles was a book compiled from notes of speeches Sun gave near Guangzhou (taken by a colleague, Huang Changgu, in consultation with Sun), and therefore is open to interpretation by various parties and interest groups (see below) and may not have been as fully explicated as Sun might have wished. Indeed, Chiang Kai-shek supplied an annex to the Principle of Mínshēng, covering two additional areas of livelihood: education and leisure, and explicitly arguing that Mínshēng was not to be seen as either supporting communism or socialism. The French historian of Chinese history, Marie-Claire Bergère's view is that the book is a work of propaganda. Its purpose is to appeal to action rather than to thought. As Sun Yat-sen declared, a principle is not simply an idea; it is "a faith, a power." [3] 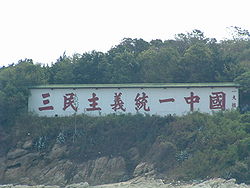 The Three Principles of the People were claimed as the basis for the ideologies of the Kuomintang under Chiang Kai-shek, of the Communist Party of China under Mao Zedong, and of the Wang Jingwei Government. The Kuomintang and the Communist Party of China largely agreed on the meaning of nationalism but differed sharply on the meaning of democracy and people's welfare, which the former saw in Western social democratic terms and the latter interpreted in Marxist and communist terms. The Japanese collaborationist governments interpreted nationalism less in terms of anti-imperialism and more in terms of cooperating with Japan to advance pan-Asian interests.

There were several higher-education institutes (university departments/faculties and graduate institutes) in Taiwan that used to devote themselves to the 'research and development' of the Three Principles in this aspect. Since the late 1990s, these institutes have re-oriented themselves so that other political theories are also admitted as worthy of consideration, and have changed their names to be more ideologically neutral (such as Democratic Studies Institute).

In addition to this institutional phenomenon, many streets and businesses in Taiwan are named "Sãn-mín" or for one of the three principles. In contrast to other controversial street names, there has been no major renaming of these streets or institutions in the 1990s.

Although the term "Sanmin Zhuyi" (三民主義) has been less explicitly invoked since the mid-1980s, no major political party has explicitly attacked its principles. The Three Principles of the People remains explicitly part of the platform of the Kuomintang and in the Constitution of the Republic of China.

As for Taiwan independence supporters, some have objections regarding the formal constitutional commitment to a particular set of political principles. Also, they have been against the mandatory indoctrination in schools and universities, which have now been abolished in a piecemeal fashion beginning in the late 1990s. However, there is little fundamental hostility to the substantive principles themselves. In these circles, attitudes toward the Three Principles of the People span the spectrum from indifference to reinterpreting the Three Principles of the People in a local Taiwanese context rather than in a pan-Chinese one.

The Viet Nam Revolutionary League was a union of various Vietnamese nationalist groups, run by the pro-Chinese Viet Nam Quoc Dan Dang. The Viet Nam Quoc Dan Dang translates directly into Vietnamese Kuomintang, and it was based on the Chinese Kuomintang party. Its stated goal was for unity with China under the Three Principles of the People, and opposition to Vietnamese and French Imperialists.[4][5] The Revolutionary League was controlled by Nguyen Hai Than, who was born in China and could not speak Vietnamese. General Zhang shrewdly blocked the Communists of Vietnam, and Ho Chi Minh from entering the league, as his main goal was Chinese influence in Indo China.[6] The KMT utilized these Vietnamese nationalists during World War II against Japanese forces.[7]