The Democratic Progressive Party (DPP; 民主進步黨) is a political party in Taiwan, and the dominant party in the Pan-Green Coalition. Founded in 1986, DPP is the first meaningful opposition party in Taiwan. It has traditionally been associated with strong advocacy of human rights and a distinct Taiwanese identity, including promotion of de jure Taiwan independence. Its present chair is Dr. Tsai Ing-wen. The DPP is a member of Liberal International and a founding member of the Council of Asian Liberals and Democrats. It represented Taiwan in the Unrepresented Nations and Peoples Organisation. The DPP and its affiliated parties are widely classified as "liberal" because of their strong human rights stance and endorsement of pluralistic democracy while their Kuomintang opposition, historically take a defensive posture on such issues, is generally viewed as "conservative."[citation needed] In Taiwan, though, these classifications carry nuances that may not be characteristic of them elsewhere. Discussion of left-right politics is rare in Taiwan. The mass media rarely mention the existence of a political spectrum, as each network and news source tends to take an openly partisan stand.

The DPP has its roots in liberal opposition to Kuomintang one-party authoritarian rule. It was initially known as the Tangwai – or "outside-the-party" – movement. This movement culminated in the formation of the DPP as an alternative party on September 28, 1986. The new party contested the 1986 election even though competing parties remained illegal under national law until the next year. The first members of the party drew heavily from the ranks of family members and defense lawyers of political prisoners as well as intellectuals and artists who had spent time abroad. Such individuals were strongly committed to political change that would ensure constitutional support in Taiwan for freedoms of speech, press, assembly, and association. The party did not at the outset give open support to an independent Taiwanese national identity–a move that could have invited a violent crackdown by the Taiwan's Kuomintang rulers. Its platform was pro-environment and pro-democracy. As more and more of its demands were met during the 1990s–such as the direct popular election of Taiwan's president and all representatives in its Legislative Yuan, and open discussion of Taiwan's repressive past as represented in the 2-28 Incident and its long martial law aftermath–a greater variety of views could be advocated in the more liberal political atmosphere. Party members began openly promoting a national identity for Taiwan separate from that of China. The DPP supported reform of the Constitution that would make it official that Taiwan's national government represented only the people of Taiwan and made no claims to territory in mainland China or Mongolia.

Once the DPP had representation in the Legislative Yuan (LY, Congress), the party used the legislature as a forum to challenge the government. However, it did not emerge as a formidable force until 1991, when the elderly LY members elected from the mainland provinces in 1948 retired. Fears that the DPP would one day take control of the legislature led then-President Lee Teng-hui to push through a series of amendments to strengthen presidential power (for example, Taiwan's premier would no longer have to be confirmed by the Legislative Yuan). 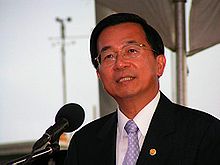 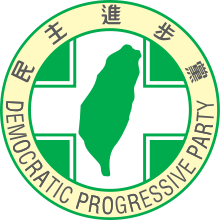 The DPP won the presidency with the election of Chen Shui-bian in March 2000, ending more than half a century of KMT rule in Taiwan. Chen softened the party's stance on independence to appeal to moderate voters, appease the United States and placate China. He also promised not to change the ROC state symbols or declare formal independence as long as the People's Republic of China did not attack Taiwan.

The DPP became the largest party having reached a plurality in the Legislative Yuan for the first time in 2002 following the 2001 legislative election. However, a majority coalition between the KMT, People's First Party, and New Party (collectively known as the Pan-Blue Coalition) prevented it from taking control of the chamber.

In 2004, President Chen Shui-bian was re-elected by a narrow margin following a controversial assassination attempt on him and the Vice President Annette Lu only hours before the election. President Chen narrowly won the election over Lien Chan. Lien Chan demanded a recount the following morning. A judicial recount under the jurisdiction of a special panel of the High Court began on 10 May 2004 and ended on May 18, 2004. It was conducted by about 460 teams situated in 21 courthouses across the Taiwan area. Each team had seven members – one judge, two members each from the district court and the local government election authorities and two witnesses each representing the plaintiff (Pan-Blue Coalition) and the defendant (Pan-Green Coalition). Disputed votes were sent to High Court in Taipei for verification. After the recount, President Chen was confirmed the winner of the election by a smaller margin (25,563 as opposed to 29,518 originally).

The DPP suffered a significant election defeat in nationwide local and county elections in December 2005. The pan-blue coalition captured 16 of 23 county and city government offices under the leadership of popular Taipei mayor and KMT Party Chairman Ma Ying-jeou.

The results led to a shake up of the party leadership. Su Tseng-chang resigned as DPP chairman soon after election results were announced. Su had pledged to step down if the DPP lost either Taipei County or failed to win 10 of the 23 mayor/magistrate positions. Vice President Annette Lu was appointed acting DPP leader. Presidential Office Secretary-General Yu Shyi-kun was elected in a three-way race against legislator Chai Trong-rong and Wong Chin-chu with 54.4% of the vote.

Premier Frank Hsieh, DPP election organizer and former mayor of Kaohsiung twice tendered a verbal resignation immediately following the election, but his resignation was not accepted by President Chen until January 17, 2006 after the DPP chairmanship election had concluded. The former DPP Chairman Su Tseng-chang was appointed to replace Hsieh as premier. Hsieh and his cabinet resigned en masse on January 24 to make way for Su and his new cabinet. President Chen had offered the position of Presidential Office Secretary-General (vacated by Su) to the departing premier, but Hsieh declined and left office criticizing President Chen for his tough line on dealing with the PRC.

On September 30, 2007, Taiwan's ruling Democratic Progressive Party approved a resolution asserting a separate identity from China and called for the enactment of a new constitution for a "normal nation" . It struck an accommodating tone by advocating general use of "Taiwan" as the country's name without calling for abandonment of the name Republic of China.[1]

In the national elections held in early months of 2008 the DPP won less than 25% of the seats (38.2% vote share) in the new Legislative Yuan while its presidential candidate, former Kaohsiung mayor Frank Hsieh, lost to KMT candidate Ma Ying-jeou by a wide margin (41.55% vs. 58.45%).

The first months after the election were dominated by press coverage of the travails of Chen Shui-bian and his wife Wu Shu-jen. On August 15, 2008 Chen resigned from the Democratic Progressive Party and apologized thus: "Today I have to say sorry to all of the DPP members and supporters. I let everyone down, caused you humiliation and failed to meet your expectations. My acts have caused irreparable damage to the party. I love the DPP deeply and am proud of being a DPP member. To express my deepest regrets to all DPP members and supporters, I announce my withdrawal from the DPP immediately. My wife Wu Shu-jen is also withdrawing from the party." DPP Chairwoman Tsai Ing-wen followed with a public statement on behalf of the party: "In regard to Chen and his wife's decision to withdraw from the party and his desire to shoulder responsibility for his actions as well as to undergo an investigation by the party's anti-corruption committee, we respect his decision and accept it."[2]

The DPP vowed to reflect on public misgivings towards the party. Chairwoman Tsai insisted on the need for the party to remember its history, defend Taiwan's sovereignty and national security, and maintain its confidence.[3][4]

The party re-emerged as a formidable voice in Taiwan's political debate when Ma's administration reached the end of its first year in office. The DPP marked the anniversary with massive rallies in Taipei and Kaohsiung. Dr. Tsai's address to the crowd in Taipei on May 17 proclaimed a "citizens' movement to protect Taiwan" seeking to "protect our democracy and protect Taiwan." [5] 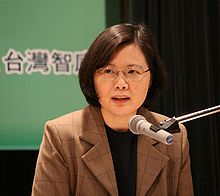 The primary political axis in Taiwan involves the issue of Taiwan independence versus eventual unification with China. Although the differences tend to be portrayed in polarized terms, both major coalitions have developed modified, nuanced and often complex positions. Though opposed in the philosophical origins, the practical differences between such positions can sometimes be subtle.

The current official position of the party is that the "Republic of China (Taiwan)" is an independent and sovereign country whose territory consists of Taiwan and its surrounding smaller islands and whose sovereignty derives only from the ROC citizens living in Taiwan (similar philosophy of self-determination), based on the "Resolution on Taiwan's Future" in 1999. It considers Taiwan independence to be a current fact making a formal declaration of independence unnecessary. The DPP rejects the so-called "one China principle" as the basis for official diplomatic relations with the People's Republic of China (PRC) and advocates a Taiwanese national identity which is separate from mainland China. The DPP argues that its efforts to promote a Taiwanese national identity are merely an effort to normalize a Taiwanese identity repressed during years of authoritarian Kuomintang rule. Democratic Progressive Party also differs from KMT on foreign and defense policies that DPP considers the relations with the United States, Japan, European states among other democratic countries are crucial for Taiwan security.

In contrast, the KMT or pan-blue coalition agrees that the Republic of China is an independent and sovereign country that is not part of the PRC, but argues that a one China principle (with different definitions across the strait) can be used as the basis for talks with the PRC. The KMT also opposes Taiwan independence and argues that efforts to establish a Taiwanese national identity separated from the Chinese national identity are unnecessary and needlessly provocative. Some KMT officials have called efforts from DPP "fascist" (a charge for which they later apologised) and "racist". At the other end of the political spectrum, the acceptance by the DPP of the symbols of the Republic of China is opposed by the Taiwan Solidarity Union.

The first years of the DPP as the ruling party drew accusations from the opposition that, as a self-styled Taiwanese nationalist party, the DPP was itself inadequately sensitive to the ethnographic diversity of Taiwan's population. Where the KMT had been guilty of Chinese chauvinism, the critics charged, the DPP might offer nothing more as a remedy than Hoklo chauvinism.

The PRC has maintained a hostile position toward the DPP. It has made some efforts to moderate its tone since passing its Anti-Secession Law in 2005 to prevent a popular backlash from Taiwan's voters. In 2008 the PRC stated it was willing to negotiate with any party in Taiwan that "accepts the so-called 1992 consensus".

For many years the Democratic Progressive Party officially recognized several factions within its membership, such as the New Tide faction (新潮流系), the Formosa faction (美麗島系), the Justice Alliance faction (正義連線系) and Welfare State Alliance faction (福利國系). Each faction endorsed slightly different policies. The factions were often generationally identifiable, representing individuals who had entered the party at different times. In 2006 the party ended official recognition of factions.[6] The factions have since stated that they will comply with the resolution.