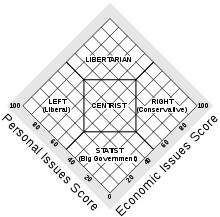 Owing its name to the left–right political spectrum, centrism is noted for its "moderate" stances on societal issues

In politics, centrism is the ideal or the practice of promoting policies that lie different from the standard political left and political right. Most commonly, this is visualized as part of the one-dimensional political spectrum of left-right politics, with centrism landing in the middle between left-wing politics and right-wing politics. Centrist ideologies tend to focus around policies such as progressive taxation, civil liberties/human rights, economic liberalism and social liberalism.

As a ‘moderate’ political position

Voters who describe themselves as centrist often mean that they are moderate in their political views, advocating neither extreme left-wing politics nor right-wing politics. In the US, it is claimed that 70% of the electorate occupy this position.[1] Voters may identify with moderation for a number of reasons: pragmatic, ideological or otherwise. It has even been suggested that individuals vote for ‘centrist’ parties for purely statistical reasons.[2]

As a pragmatic political position

Centrism is sometimes associated with political pragmatism, in that the position is not necessarily aligned to a political ideology. The political movement No Labels is described as centrist movement under this definition.[3] Social corporatism is also billed as a "middle way" between democratic socialism and liberal capitalism, where private property and capitalism is maintained but labor is granted more rights through collective bargaining schemes and social welfare provisions.

As an average between left and right

An alternate definition is to assume that the two poles in question (e.g., Left/Right) are well-defined, making the ‘political center’ the position equidistant between these two extremes. The weakness in this argument is that it is difficult to unambiguously and objectively define both poles at once, but that difficulty affects all political definitions, not just centrists.

In practice, the two poles can only be well-defined in a specific place at a specific time, since they differ from place to place and change over time. Thus, "centrism" itself means different things in different places (depending on the local political spectrum) and changes over time. For example, ideas that were considered extremist 200 years ago (such as democracy and universal suffrage) are considered centrist today - while other ideas that were considered centrist 200 years ago (such as slavery) are considered extremist today.

The term centrism can also be used as a radical position on the traditional one dimensional political spectrum. This can be done by simply advocating policies counter to the norm of politics in a certain country or region, but with these radical policies not coming necessarily from the left or right, or coming in equal measure from both. Generally radical centrism tends to focus on climate change, progressive taxation and personal freedom/civil liberties and has therefore been identified with many liberal and progressive parties.

With respect to the Socialist movement

"Centrism" has a specific meaning within the socialist political movement. It usually reflects an ideologically held position between a revolutionary and reformist position. For instance, the Independent Labour Party (ILP) was seen as centrist because they oscillated between advocating reaching a socialist economy through reforms and advocating revolution. The members of the so-called Two-and-a-half and Three-and-a-half Internationals, who could not choose between the reformism of the social democrat Second International and the revolutionary politics of the Communist Third International, are exemplary of centrism in this sense; examples are the Spanish Workers' Party of Marxist Unification (POUM), ILP and Poale Zion. Marxists often describe centrism in this sense as opportunistic, since it argues for a revolution at some point in the future but urges reformist practices in the mean time; Libertarian socialists and anarchists view any reformism as political opportunism because they view reformism as incapable of effecting structural changes to social organization.[4]

The term "Centrism" also denotes positions held by some of the Bolsheviks during the 1920s. In this context, "Centrism" refers to a position between the Right Opposition (which supported the New Economic Policy and friendly relations with capitalist countries) and the Left Opposition (which supported an immediate transition to a socialist economy and world revolution). By the end of the 1920s, the two opposing factions had been defeated by Joseph Stalin who eventually gained enough support from members of the factions through the application of various ideas formed by the factions' various leaders. (i.e. Leon Trotsky, Nikolai Bukharin, etc.)

Usage by political parties by country

The utmost centrist party of Flanders has been the Volksunie, which not only embraced social liberalism but also displayed the national sentiment of the Dutch speaking Belgians who felt culturally suppressed by Francophones. The New Flemish Alliance is the largest, and since 2009, the only successor of that party.

Among French speaking Belgians the Humanist Democratic Centre is a centre-right or centre party as it is considerably less conservative than its Flemish counterpart, Christian Democratic & Flemish. Another party in the centre of the political spectrum is the liberal Reformist Movement.

France has a tradition of parties that call themselves centrist. The most notable centrist party, often also called liberal, was the Union for French Democracy, created in 1978. Among its successors belongs the small Centrist Alliance, the most successful of them is the Democratic Movement of François Bayrou, founded in 2007.

Zentrismus is a term merely known to experts and may be confused with Zentralismus (as opposite to federalism); the usual term in German is politische Mitte (political centre). Historically, the most centrist party of all German parties with a parliamentary representation may have been the social-liberal German Democratic Party of the Weimar Republic (1918–1933), together with Alliance 90, the federation of citizen rights movements from the late phase of GDR.[citation needed]

Zentrum has been the name of the party of the Catholics, founded in 1870. It united left-wing and right-wing Catholics and is considered the first German Volkspartei (catch-all party), but it was not neutral on religious issues (such as on secular education). Zentrum had its name from the fact that its representatives sat between the liberals (left) and the conservatives (right).

In the state parliaments are another parties. The South Schleswig Voter Federation of Danes and Frisians in the state of Schleswig-Holstein has a centrist position, although in the past the party usually leaned to the left. In the German presidential election of 2009, it supported the candidate of Social Democrats and Greens. In Bavaria, the Free Voters are represented in the state parliament, they can be seen as centrist as well.

In the Republic of Ireland, the two main political parties, Fianna Fáil and Fine Gael, both claim the political centre ground.[5][5][6]). They have shared broadly similar policies in the past, with their primary division perceived as being steeped in Irish Civil War politics. Fine Gael is aligned to Christian democratic parties in Europe via its membership of the European People's Party, and is described internationally as centre-right by the likes of Reuters,[7] while Fianna Fáil is described as liberal-conservative and affiliated with the European Liberal Democrat and Reform Party. Each party is made up of centre-left and centre-right members, and neither group will accept the ideological tags "left-wing" or "right-wing".[citation needed]

The largest centre-left party is the Labour Party, a social-democratic party which has links with the Irish trade union movement.

In the Netherlands, four parties have, more than once, sent members into the cabinet. From them, the Christian Democratic Appeal (CDA) tends to be centre-right and the Democrats 66 (D66) centrist[8] or centre-left. D66 calls itself a social liberal party and avoids any explicit expressions of left and right.

The larger Dutch liberal party, the People's Party for Freedom and Democracy (VVD), has a more right-wing programme of concerning issues such as immigration and economics based on conservative liberalism. The Labour Party (PvdA) is a social-democratic party on the centre-left.

Livable Netherlands was originally a centrist political movement of local grass-root parties with an anti-establishment touch similar to early D66. However, the party entered in 2002 national parliament with a right-wing populist programme and the major issues security and immigration.

The fundamentalist Protestant ChristianUnion has a certain centrist position in so far it is leftish on social issues, immigration and environment but right wing when it comes to cultural issues such as prohibition of homosexuality, drugs and euthanasia.

In most of the Nordic countries, there are Nordic agrarian parties. These share in addition to the centrist position on the socio-economic left-right scale a clear, separate ideology. This position is centered around decentralisation, a commitment to small business and environmental protection. Centrists have aligned themselves with the Liberal International and European Liberal Democrat and Reform Party. Historically, all of these parties were farmers' parties committed to maintaining rural life. In the 1960s, these parties broadened their scope to include non-farmer related issues and renamed themselves Centre Party.

Neither the Centre Democrats and the Liberal Alliance in Denmark are rooted in agrarianism.

In British politics, the centre ground is normally affiliated with liberal and progressive politics which is in between the right and left that has the ability to shift and restructure politics, yet dominate moderate opinion. In 1978, Edward Heath, the then former Conservative Prime Minister was planning to defect from the Tories, in order to start a Centre Party in Britain with Liberal chief whip, Cyril Smith.[citation needed] Such a plan became unsuccessful.

However, in the late 1990s, the traditionally social-democratic Labour Party under the leadership of Tony Blair began to move towards a centrist Third Way policy platform, creating New Labour.

Generally the party in UK politics most seen as holding the centre ground is the Liberal Democrats who are a social liberal party who are often places between centre-left and the radical centre in terms of the political spectrum. In March 2011 the leader of the Liberal Democrats and Deputy Prime Minister of the United Kingdom, Nick Clegg, stated that he believed that his party belonged to the radical centre.

Clegg also quoted John Meynard Keynes, William Beveridge, Jo Grimond, David Lloyd George and John Stuart Mill, implying that they may also have belonged to the radical centre. He pointed to liberalism as an ideology of people, and he described the political spectrum and his party's position on it as follows: "For the left, an obsession with the state. For the right, a worship of the market. But as liberals, we place our faith in people. People with power and opportunity in their hands. Our opponents try to divide us with their outdated labels of left and right. But we are not on the left and we are not on the right. We have our own label: Liberal. We are liberals and we own the freehold to the centre ground of British politics. Our politics is the politics of the radical centre."

In New Zealand, United Future is the centrist party with currently one seat in parliament.

The national party which voters consider to be closest to the centre, according to several opinion polls; is Union, Progress and Democracy. Electors also consider the two most important nationalist parties: Convergence and Union from Catalonia and Basque Nationalist Party from the Basque Country, to be centred. [9]