The Liberal Alliance is a classical liberal political party in Denmark. Founded in 2007 as the New Alliance (Danish: Ny Alliance), the party was the first new major Danish political party in a decade.[3] It currently has four members of the Folketing, having won five at the 2007 election.

The party was founded on 7 May 2007 by Naser Khader MP, Anders Samuelsen MEP – both from the Social Liberal Party – and Gitte Seeberg, a Conservative People's Party MEP. In November 2007, the party won 5 of 179 seats in Parliament. After the election, the party position moved towards economic liberalism and the centre-right, with the party changing its name to Liberal Alliance on 27 August 2008.[4] After the departure of Seeberg in 2008 and Khader in 2009, the party regrouped under Samuelsen's leadership, and won 9 seats at the 2011 election.

To comply with Danish election law, and to be able to stand for elections the Liberal Alliance had to gather 19,185 signatures of supporters on special forms, the number being equivalent to one parliamentary seat in the Folketing. Each completed form had to be certified with the civil registry offices of municipalities before being collectively handed in to the Ministry of the Interior.

On one occasion, on 12 May in Horsens, the three leading figures of the party managed to collect over 2,000 signatures in one day.[6] On 21 May the party reported they were half-way, having gathered in 10,000 signatures.[7]

The party finally completed its nomination process on 29 June by being accepted on the Ministry of the Interior's list of parties able to stand for elections to the Folketing after handing in the 21,516 required signatures.[8]

On 30 August 2007, the party presented a more detailed programme of their political standpoints.[9] Some of the points in this programme include:[10] Longer mandatory school-attendance, with free food and homework-aid; European Marshall Plan to the Middle East; increasing foreign aid to 1% of GDP; increased focus on prevention in public health, with lower prices on healthy foods; and an exhaustive reform related to immigration and asylum politics. 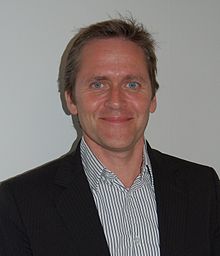 On January 29, 2008, founding member Gitte Seeberg left the party in protest against the party's status as a right-wing party, which conflicted with her own desire to form a centrist party rejecting the influence of the Danish People's Party.[11] A week later, on February 5, another of the party's members of parliament, Malou Aamund, left the party and joined the government-coalition party, Venstre.[12] On June 24, 2008 Jørgen Poulsen was excluded from the parliamentary group, though not from the party itself.[13] Reflecting its more market liberal position, on 27 August 2008, the party renamed itself the Liberal Alliance and changed its symbol from the letter Y to the letter I. On September 1, 2008 the party regained a third mandate in the parliament, as Gitte Seeberg was appointed secretary general of the Danish branch of WWF. Her mandate was given to former deputy mayor of Slagelse, Villum Christensen.[14]

On 5 January 2009, founding member and party leader Naser Khader left the party, citing that he did not believe in it any longer.[15] At the time, Anders Samuelsen was scheduled to take over leadership of the party later that month. The same day, Villum Christensen expressed doubt on his future in the party.[16]

Nonetheless, the party gained significant ground in opinion polls from spring 2010 to 2011. The party's candidates for the 2011 parliamentary election include a number of journalists and athlete Joachim Olsen.[17]

When Malou Aamund resigned from the Folketing in June 2011, she was replaced by Professor Niels Høiby, who took his seat with the Liberal Alliance, taking their contingent in four.

The party originally opposed the influence of the social conservatism of the Danish People's Party on the Government, as well as the alleged left-leaning opposition strategy of the Social Liberal Party. In 2008, the party moved somewhat to the political right, emphasising the liberal economic components of its party programme, and changed its name from New Alliance into Liberal Alliance.

The party has proposed extensive liberal reforms, including a tax reform reducing income tax to a flat rate of 40%, a "realistic immigration policy and humane refugee policy with an emphasis on democratic integration", a pro-European Union policy while strengthening Denmark's position, an increase in foreign aid to 1% of GDP, and reforms of state schools and the Danish health system. The party supports green energy.[3]

The party opposed the governing Venstre party taking Denmark into the Euro Plus Pact.[18]

The Liberal Alliance is the only party in Denmark to support nuclear power.[19] In 2009, the party voted against subsidies for environmentalist renovations without significant tax cuts.[20]

Along with the Red-Green Alliance, the Liberal Alliance was the only party whose MPs supported equalising MPs' pension age with the rest of the country's.[21]

The party is socially progressive. Along with the centre-left and left-wing parties, the Liberal Alliance supports allowing same-sex couples to have the same rights as heterosexual couples in the established Church of Denmark.[22] The party opposed the reintroduction of border controls in 2011, and supports dismantling them.[23] It supports ending the ban on foreigners owning holiday homes in Denmark.[24] Party leader Anders Samuelsen said in 2011 that the Venstre-led government risked losing its change to retain power by adopting several socially conservative Danish People's Party policies.[25]

The original New Alliance considered itself a centrist party, "taking the best values of social liberalism and social conservatism".[26] The meaning of the latter is the same as compassionate conservatism in English-speaking countries (not to be mistaken with the morally right-wing social conservatism of US politics).

By using these two terms, New Alliance positioned itself equidistant between the former parties of the three founding members. Social liberalism is, of course, the official ideology of the Social Liberal Party, whereas "social conservatism" is a term sometimes invoked by members of the Conservative Party who stress the support of the welfare society, such as Liberal Alliance co-founder Gitte Seeberg.

After Gitte Seeberg left the party, the "social conservatism" part was dropped, and the party name was changed into Liberal Alliance. However, there were still considerable ideological differences among the two remaining founders, and it was not until Naser Khader was replaced by Anders Samuelsen that the party could get a more classical liberal identity.

In the earliest days of the party's existence, the party was accused of populism or personalism, still lacking stances on many topics and based on the popularity of Naser Khader.[27] Critics have also pointed to the fact that all major parties in Denmark advocate social liberal policies, at least economically.

A poll conducted by independent analysts for the journal A4 Weekly, issued by the Danish Confederation of Trade Unions, concluded that "opinions of the New Alliance's voters bristle in all directions" and that party supporters' attitudes were "very close to the Danish average voter on a great number of issues". Political commentator Henrik Qvortrup, former spin doctor of Prime Minister Anders Fogh Rasmussen, claimed: "These are really Mr and Mrs Denmark's points of views". Another analyst, Henrik Dahl, expected the Liberal Alliance will encounter problems when trying to formulate a detailed party programme, inevitably being unable to render all supporters satisfied.[28]

Immediately after its creation, Liberal Alliance had a surge of members. 24 hours after the announcement of the party, more than 12,000 had registered on the party website. Three days later 16,000 had registered and 8,000 of these had paid the membership fee.[29] For comparison, the Social Liberal Party had an estimated 9,500 paying members as of 2006.

The party received notable sums from the investment bank Saxo Bank (500,000 Danish kroner) and the businessman Lars Kolind (100,000 kroner). As of 22 May, the party has seven paid employees and a number of volunteers. The party has announced it will not hire additional employees until it has more funds.[30]

With the defection of MEPs Gitte Seeberg and Anders Samuelsen, the Conservatives and the Social Liberal Party were effectively left without representation in the European Parliament. The two MEPs did, however, stay in their factions (the conservative EPP-ED and the liberal ALDE respectively). The Liberal Alliance announced that it would join the ALDE group after future EU elections.[32] However, the party failed to achieve representation after the 2009 elections.

The party has had two leaders since its foundation:

Since its formation, the party has had fourteen MPs. Its nine current MPs are given in bold.

At its formation, two MEPs joined the party. Both resigned from the European Parliament after being elected to the Danish Parliament in November 2007.