Denmark was until December 31, 2006 divided into 15 counties (Danish: amter), and 270 municipalities (kommuner). On January 1, 2007, the counties were replaced by five Regions and the number of municipalities slashed to 98. 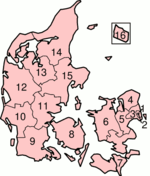 Greenland and the Faroe Islands are also part of the Kingdom of Denmark, but both enjoy internal autonomy. Both are largely self-governing, and each community sends two members to the Danish Parliament. The Faroe Islands obtained self-government in 1948; previously the islands had the status of a Danish amt.

A government proposal in 2004 called for the counties to be replaced by five large regions with health care as their sole responsibilities; two regions in Jutland, two regions in Zealand and one region covering Funen and the southernmost part of Jutland. The proposal also required the municipalities to merge reducing them from 271 to about 100, with a minimum of 20,000 inhabitants in each municipality, although some exceptions were made to this rule. From 2007 25 municipalities have fewer than 30,000 inhabitants each, with the average number of inhabitants being over 55,500 per municipality. Only the United Kingdom and Ireland have more populous entities at the lowest political administrative level.

The reform was confirmed by the Danish Parliament on February 24, 2005, and the counties were abolished on January 1, 2007.