The Politics of Denmark takes place in a framework of a parliamentary, representative democratic, constitutional monarchy, in which the Prime Minister is the head of government, and of a multi-party system. The Monarch is the head of state and plays a largely ceremonial role with reserve powers.

Denmark has a multi-party system and no single party has held an absolute majority in parliament since the beginning of the 20th century. Since only four post-war governments have enjoyed a majority in parliament, government bills rarely become law without negotiations and compromise with both supporting and opposition parties. Hence the Danish parliament tends to be more powerful than legislatures in other EU countries. The constitution does not grant the judiciary power of judicial review of legislation, however the courts have asserted this power with the consent of the other branches of government. Since there are no constitutional or administrative courts, the Supreme Court deals with a constitutional dimension.

The degree of transparency and accountability is reflected in the public’s high level of satisfaction with the political institutions, while Denmark is also regularly considered one of the least corrupt countries in the world by international organizations[1].

On many issues the political parties tend to opt in for a co-operation, and the Danish state welfare model receives a broad parliamentary support. This ensures a focus on public-sector efficiency as well as devolved responsibilities of local government on regional and municipal levels.

In accordance with the Danish Constitution the Danish Monarch, as head of state, is the theoretical source of all executive and legislative power. However, since the introduction of parliamentary sovereignty in 1901, a de facto separation of powers has been in effect.[citation needed]

The text of the Danish constitution dates back to 1849. Therefore it has been interpreted by jurists to suit modern conditions. In a formal sense, the Monarch retains the ability to deny giving a bill royal assent. In order for a bill to become law, a royal signature, as well as a countersignature by a government minister, is required. The Monarch also chooses and dismisses the Prime Minister, although in modern times this has become a no-option. Today a dismissal would cause a constitutional crisis. On 28 March 1920, King Christian X was the last Monarch to exercise the power of dismissal, sparking the 1920 Easter Crisis. All royal powers called Royal Prerogative, such as patronage to appoint ministers and the ability to declare war and make peace, are exercised by the Prime Minister and the Cabinet, with the formal consent of the Queen. When a new government is to be formed, the Monarch calls the party leaders to a conference of deliberation, where the latter advise the Monarch. On the basis of the advice the Monarch then appoints the party leader who commands a majority of recommendation to lead negotiations for forming a new government.[citation needed]

According to the principles of constitutional monarchy, today the Monarch has an essentially ceremonial role, restricted in his or her exercise of power by the convention of parliamentary democracy and the separation of powers. However, the monarch does continue to exercise three formal rights: the right to be consulted; the right to advise; and the right to warn. Pursuant to these ideals, both the Prime Minister and the Cabinet attend the regular meeting of the Council of State.[citation needed] 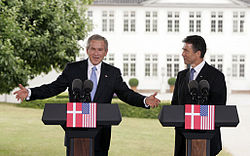 The Government performs the executive functions of the Kingdom. After the appointment of a party leader to form a new government the Prime Minister-elect together with the leaders of his coalition partners selects the other Ministers who make up the Government and act as political heads of the various government departments. Cabinet members are occasionally recruited from outside parliament.

Since 3 October 2011, Helle Thorning-Schmidt has been Prime Minister in Denmark.

Unlike many of bigger countries in the European Union Denmark has a long tradition for minority-governments. The current coalition government between the Venstre, the Social Liberal Party and the Socialist People's Party is a minority-government, based on the support of the Red-Green Alliance (Enhedslisten) and a handful of independent members of parliament. Because of this tradition it has historically been common practice to cooperate among the two sides in the parliament. The last government, dating back to 2001, has been heavily criticised for breaking this tradition as many of the major decisions e.g. the decision to join the War in Iraq, the Regional Reform, and all the Finance Laws upon which the political and economic foundations are based each year have only had a small majority in the parliament.

The Danish executive consists of a number of government departments known as Ministries. These departments are led by a cabinet member and known as Minister for the relevant department or portfolio. In theory all Ministers are equal and may not command or be commanded by a fellow minister. Constitutional practice does however dictate, that the Prime Minister is primus inter pares, first among equals. Unlike many other countries, Denmark has no tradition of employing junior Ministers.

Also the Minister has his own private secretariat as well as communications personnel. Unlike normal civil servants, the communication staff is partisan and do not remain in their posts upon changes of Government.

Parliament performs the legislative functions of the Kingdom. As a parliament, it is at the centre of the political system in Denmark and is the supreme and ultimate legislative body answerable to no one. It operates within the confines of the Constitution. The Prime Minister, and the Government in general, are drawn from parliament through the application of the parliamentary principle (there must not be a majority against the government). The government is answerable to parliament through the principle of parliamentary control (question hour, general debates and the passing of resolutions/motions). Ministers can be questioned by members of Parliament about specific questions of government policy. There may be general debates about broader issues of government policy, and these debates may be followed by a motion of no-confidence. The opposition rarely ask for motions of no confidence, as the government is generally certain of its majority. But government policy is often discussed in general in the plenary assembly of Parliament. Since 1953, when the Danish constitution was reformed, parliament has been unicameral.

Parliament is composed of 179 seats, whereof two are reserved for the Faroe Islands and two for Greenland. The remaining 175 seats are taken up by MPs from elected in Denmark. All 179 seats are contested in elections held at least every four years and in the present parliament, all seats are taken up by members belonging to a political party.

All parties receiving more than 2% of the votes are represented in parliament. Comparatively, this is quite low; in Sweden the minimum level of support necessary for getting into parliament is 4%. Often, this has led to the representation of many parties in parliament, and correspondingly complex/unstable government majorities. However, during the last decade the political system has been one of stable majorities and rather long government tenures.

Denmark does not use a first-past-the-post voting system based on constituencies. Instead a system of constituency based proportional representation as well as a system of allotment is indirectly prescribed in the constitution, ensuring a balanced distribution of the 179 seats. 135 members are elected by proportional majority in constituencies while the remaining 40 seats are allotted in proportion to the total number of votes a party or list receives. The Faroe Islands and Greenland elect 2 members each.

All parties and lists receiving more than 2% of the total vote are guaranteed parliamentary representation. As a consequence of the system, the number of votes required to be elected to parliament varies across the country; it generally requires fewer votes to be elected in the capital of Copenhagen than it does being elected in less populous areas.

The participation of the electorate in general elections normally lies above 85%.

Denmark has a multiparty system with currently seven parties represented in parliament. The four oldest and in history most influential parties are the Conservative People's Party, the Social-Democratic Party, the Liberal Party and the Social-Liberal Party. However, demographics have been in favor of other and younger parties, which has led to a constant process of policy development and gradual renewal amongst, but not limited to, the four old parties.

None of the parties have exactly the same organization. It is however common for a party to have: An annual convention which approves manifestos and elects party chairmen; a board of leaders; an assembly of representatives as well as a number of local branches with their own organization. In most cases the party members in parliament form their own group with autonomy to develop and promote party politics in parliament and between elections.

Denmark has an independent and highly professional judiciary. Unlike the vast majority of civil servants, Danish judges are appointed directly by the Monarch. However, since the constitution ensures the independence of the judiciary from Government and Parliament in providing, that judges shall only take into account the laws of the country (i.e. acts, statues and practices), the procedure on appointments is only a formality. Until 1999 appointment of judges was a de facto responsibility of the Ministry of Justice, who, as well, was charged with the overall administration of the justice system. On accusations of nepotism and in-group bias, the Ministry in 1999 setup two quasi-autonomous non-governmental organizations responsible for appointments and administration. Judges may only be removed from office on grounds of gross misconduct or lasting physical or psychological illnesses.

Ombudsmanden is a person who is elected by parliament to control the government by inspecting institutions under government control, primarily places where citizens are deprived of their personal freedom, including but not limited to, prisons and psychiatric hospitals. Ombudsmanden has no power to personally act against the government, but he can, as any other citizen, ask the courts to take up cases where the government might be violating Danish law. Ombudsmanden can criticize the government after an inspection and bring matters to public attention, and the government can choose to act upon his criticism or choose to ignore it, with whatever costs it might have towards the voters and the parliament.