Coat of arms of Denmark

Coat of arms of Denmark

The national coat of arms of Denmark consists of three crowned blue lions accompanied by nine red hearts, all in a golden shield. The oldest known depiction of the insignia dates from a seal used by King Canute VI c. 1194. The oldest documentation for the colours dates from c. 1270.[1] Historically, the lions faced the viewer and the number of hearts was not regulated and could be much higher. Historians believe that the hearts originally were søblade (literally: sea-leaves) but that this meaning was lost early due to worn and crudely made signets used during the Middle Ages. A royal decree of 1972 specifies these figures as søblade but Danes normally refer to them as hearts. The current version was adopted in 1819 during the reign of King Frederick VI who fixed the number of hearts to nine and decreed that the heraldic beasts were lions, consequently facing forward. A rare version exists from the reign of king Eric of Pomerania in which the three lions jointly hold the Danish banner, in a similar fashion as in the coat of arms of the former South Jutland County. Until c. 1960, Denmark used both a "small" and a "large" coat of arms, similar to the system still used in Sweden. The latter symbol held wide use within the government administration, e.g., by the Foreign Ministry. Since this time, the latter symbol has been classified as the coat of arms of the royal family, leaving Denmark with only one national coat of arms, used for all official purposes.

The blazon in heraldic terms is: Or, three lions passant in pale Azure crowned and armed Or langued Gules, nine hearts Gules. 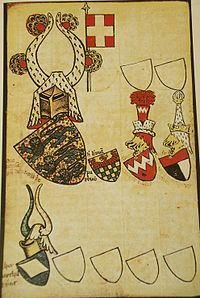 The Danish arms in the Gelre Armorial, 14th century. This is the oldest coloured image of the Dannebrog. The crest was used by Danish monarchs from the 13th century until c. 1420.[1] The flag is not part of the crest.

The royal coat of arms is more complex.[3] The shield is quartered by a silver cross fimbriated in red, derived from the Danish flag, the Dannebrog. The first and fourth quarters represent Denmark by three crowned lions passant accompanied by nine hearts; the second quarter contains two lions passant representing Schleswig, a former Danish province now divided between Denmark and Germany, the third quarter contains a total of three symbols. The three golden crowns on blue are officially interpreted as a symbol of the former Kalmar Union. This symbol is identical to the coat of arms of Sweden and originally represented a Danish claim to the Swedish crown. The silver ram on blue represents the Faroe Islands and the similarly coloured polar bear represents Greenland. The current version of the arms, established by royal decree 5 July 1972,[3] is greatly simplified from the previous version which contained seven additional sub-coats representing five territories formerly ruled by the Danish kings and two medieval titles: Holstein, Stormarn, Dithmarschen, Lauenburg, Delmenhorst, and King of the Wends and Goths. A crowned silver stockfish on red was formerly included to represent Iceland, but due to Icelandic opposition, this symbol was replaced in 1903 by a silver falcon on blue. The falcon was in turn removed from the royal arms in 1948 following the death of King Christian X in 1947 and reflecting the 1944 breakup of the Dano-Icelandic union.

The centre escutcheon, two red bars on a golden shield, represents Oldenburg; the ancestral home of the former royal dynasty that ruled Denmark and Norway since the middle of the fifteenth century. When the senior branch of this dynasty became extinct in 1863, the crown passed to Prince Christian of the cadet branch Glücksburg, whose descendents have reigned in Denmark ever since. The House of Glücksburg continues the use of the arms of the old Oldenburg dynasty, and the symbol is still officially referred to by its old association.

Two woodwoses (vildmænd) act as supporters, and this element can be traced back to the early reign of the Oldenburg dynasty. Similar supporters were used in the former arms of Prussia. The shield features the insignias of the Order of the Dannebrog and the Order of the Elephant around it.

A blazon in heraldic terms is: A shield quartered by a cross Argent fimbriated Gules, first and fourth quarter Or, three lions passant in pale Azure crowned and armed Or langued Gules, nine hearts Gules (for Denmark); second quarter Or, two lions passant in pale Azure armed Or langued Gules (for Schleswig); third quarter Azure, party per fess, in base per pale; in chief three crowns Or (for the Kalmar Union), in dexter base a ram passant Argent armed and unguled Or (for the Faroe Islands), in sinister base a polar bear rampant Argent (for Greenland). Overall an escutcheon Or two bars Gules (for Oldenburg) the whole surrounded by the Collars of the Order of the Dannebrog and the Order of the Elephant. Supporters two woodwoses armed with clubs Proper standing on a pedestal. All surrounded by a mantle Gules doubled Ermine crowned with a royal crown and tied up with tasseled strings Or.

The royal coat of arms has since c. 1960 been reserved exclusively for use by the Monarch, the royal family, the Royal Guards and the royal court according to royal decree. A select number of purveyors to the Danish royal family are also allowed to use the royal insignia.

Other members of the Royal Family

A medieval ship flag captured by forces from Lübeck in the 1420s showed the arms of Denmark, Sweden, Norway and Pomerania. The original flag was destroyed during a World War II attack on the city, but a 19th century copy remains in Frederiksborg Palace, Denmark. The saint accompanying the Virgin Mary and infant Christ is Saint James the Greater, identified by his scallop shell emblem.

Territories and titles formerly represented in the Danish arms 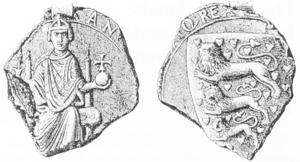 The earliest known example of the Danish arms, the seal of Canute VI, 1190s. The only known copy of this insignia was discovered in 1879 in the Grand Ducal archive of Mecklenburg-Schwerin, Germany. Note the king's closed crown which differs from the open crowns shown on the seals of his successors, and the shield that is semé of hearts rather than showing only nine.[4] 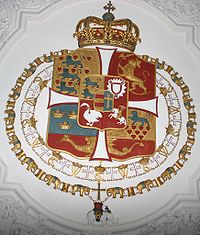 Coat of arms of Frederick IV of Denmark and Norway, as depicted in the Long Hall of Rosenborg Castle. 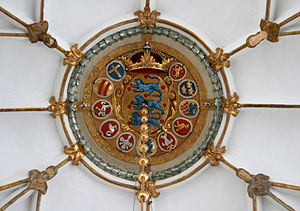 The following list is based on the research by Danish heraldist, Erling Svane.[5] Danish names are shown in italics.

Coat of arms of Estonia