Kaohsiung (Chinese: 高雄; pinyin: Gāoxióng; Pe̍h-ōe-jī: Ko-hiông; old names: Takao, Takow, Takau) is a city located in southwestern Taiwan, facing the Taiwan Strait on the west. Kaohsiung, officially named Kaohsiung City, is divided into thirty-eight districts. The city is one of five special municipalities of the Republic of China (Taiwan). On December 25, 2010, it merged with Kaohsiung County to form a larger municipality.[1]

Kaohsiung is the second largest city in Taiwan, with a population around 2.9 million.[2] It is a center for manufacturing, refining, shipbuilding, and other light and heavy industries. A major port, through which pass most of Taiwan's marine imports and exports, is located at the city but is not managed by the city government.

Kaohsiung International Airport serving the city is the second largest airport in Taiwan. The Port of Kaohsiung is the largest harbor in Taiwan. Kaohsiung is the terminal of the Sun Yat-sen Freeway. The city is served by the railway stations of Western Line and Pingtung Line. Taiwan High Speed Rail connects it with Taipei City. The Kaohsiung Mass Rapid Transit, the city's subway system, was launched in early 2008. Kaohsiung was the host city of the 2009 World Games, a multisport event primarily composed of sports not featured in the Olympic Games. The city is also home to the Republic of China Navy. 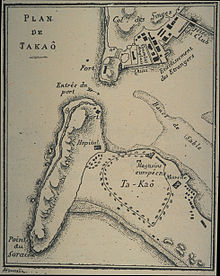 Founded near the end of the 17th century, the village was known as Takau (Chinese: 打狗; pinyin: Dǎgǒu; Pe̍h-ōe-jī: Táⁿ-káu; literally "beat the dog") in the Hoklo language spoken by most of the early immigrants. The name originates from the Makatao language of the local aboriginal tribe and translates as "bamboo forest". The Dutch established Fort Zeelandia in 1624 and defeated the local tribes in 1635. They called the place Tancoia. The Dutch were later expelled by the Kingdom of Tungning government founded by Ming Dynasty loyalists of Koxinga in 1662. Zheng Jing, the son of Koxinga, renamed the village Wannian Zhou (simplified Chinese: 万年洲; traditional Chinese: 萬年州; pinyin: Wàn Nián Zhōu; literally "region of ten thousand years") in 1664. The name was restored to Takau in the late 1670s, when the town expanded dramatically with immigrants from mainland China. In 1684 the Qing Dynasty annexed Taiwan and renamed the town Fengshan County (simplified Chinese: 凤山县; traditional Chinese: 鳳山縣; pinyin: Fèngshān xiàn; literally "phoenix mountain"), considering it a part of Taiwan Prefecture. It was first opened as a port during the 1680s.

In 1895, Taiwan was ceded to Japan as part of the Treaty of Shimonoseki. It was during this period that the city's name was changed from 打狗 (Taiwanese: Táⁿ-káu) to 高雄 (romaji: Takao). While the sound remained more or less the same when pronounced in Japanese, the literal meaning of the name changed from "Beating Dog" to "High Hero". The Japanese developed Takao, especially the harbour. An important military base and industry center, the city was heavily bombed by Task Force 38 and FEAF during 1944–1945.

After control of Taiwan was handed to the Republic of China in 1945, the official romanization of the city name came to be "Kao-hsiung", based on the Wade–Giles romanization of the Mandarin reading of the kanji name.[3] Kaohsiung was upgraded to a special municipality on July 1, 1979, by the Executive Yuan, which approved this proposal on November 19, 1978. The Kaohsiung Incident took place in Kaohsiung on December 10, 1979. 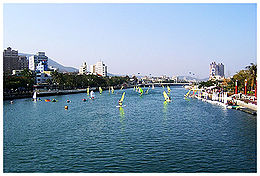 The city sits on the southwestern coast of Taiwan facing the Taiwan Strait. The downtown areas are centered around Kaohsiung Harbor with the island of Qijin on the other side of the harbor acting as a natural breakwater. The Love River (or Ai River) flows into the harbor through the Old City and downtown. Zuoying Military Harbor lies to the north of Kaohsiung Harbor and the city center. Kaohsiung's natural landmarks include the coral mountains Ape Hill, Shoushan and Banpingshan.

Kaohsiung is located south of the Tropic of Cancer. The climate is tropical, specifically a tropical wet and dry climate (Koppen Aw), with average temperatures ranging from between 18.6 and 28.7 degrees Celsius, and average humidity between 60 and 81%. Average annual rainfall is approximately 1785 mm, focused primarily from June to August.

Kaohsiung is sometimes seen as the political mirror image of Taipei. While northern Taiwan leans towards the Pan-Blue Coalition in the state-level elections, southern Taiwan leaned towards the Pan-Green Coalition since late 1990s, and Kaohsiung is no exception. Frank Hsieh of the Democratic Progressive Party was reelected twice as Mayor of Kaohsiung, where he was widely credited for transforming the city from an industrial sprawl into an attractive modern metropolis. Hsieh resigned from the office of mayor to take up the office of Premier of the Republic of China in 2005. The last municipal election, held on December 9, 2006, resulted in a victory for the Democratic Progressive Party's candidate Chen Chu, the first elected female mayor of special municipality in Taiwan, defeating her Kuomintang rival and former deputy mayor, Huang Chun-ying.

Kaohsiung has 38 districts (區). Each district is divided up into villages (里), which are sub-divided into neighborhoods (鄰).

Note: For the inconsistency of the rominization systems in Taiwan. This table was made in a sortable form, contains both Hanyu Pinyin (the official standard of the central government of ROC), and Tongyong Pinyin (the official standard of the Kaohsiung City Government)[1]. The major order of districts referred to the code of administrative area. [2]

Two islands in the South China Sea are administered by Kaohsiung City as parts of Qijin District: 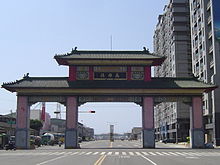 The gate of Kaohsiung Harbor

Intensive settlement began in earnest in the late 17th century, when the place was known as Ch'i-hou. Opened in 1863 as a treaty port, subsidiary to the port of Anping farther north on the coast, Kaohsiung became a customs station in 1864 and then gradually became an important port for the southern Taiwan coastal plain.

Kaohsiung's real economic and strategic importance began under the Japanese occupation (1895–1945). The Japanese needed a good port in southern Taiwan to serve those designated areas that were to become a major source of raw materials and food for Japan, and Kaohsiung was chosen. It became the southern terminus of the main north-south railway line, and from 1904 to 1907 extensive harbor works were undertaken. In 1920 the port was given the name Takao and the area became a municipality in 1920.

After it came under Chinese administration in 1945, Kaohsiung developed rapidly. The port, badly damaged in World War II, was restored. It also became a fishing port for boats sailing to Philippine and Indonesian waters. Largely because of its climate, Kaohsiung has overtaken Keelung as Taiwan's major port.

Today as a major international port and industrial city in the southwest of the country, Kaohsiung is the most rapidly developing urban center of Taiwan. With an area of 154 km2, it has a large natural harbor, with the entrance in recent years being expanded, rock-excavated, and dredged.

As an exporting center, Kaohsiung serves the rich agricultural interior of southern Taiwan, as well as the mountains of the southeast. Major raw material exports include rice, sugar, bananas, pineapples, peanuts (groundnuts), and citrus fruits. The 2,200 hectare Linhai Industrial Park, on the waterfront, was completed in the mid-1970s and includes a steel mill, shipyard, petrochemical complex, and other industries. The city has an oil refinery, aluminum and cement works, fertilizer factories, sugar refineries, brick and tile works, and salt-manufacturing and papermaking plants. Designated an export-processing zone in the late 1970s, Kaohsiung has succeeded in attracting foreign investment to process locally purchased raw materials for export. There is also a large canning industry that processes both fruit and fish.

The ongoing Nansing Project is an ambitious plan to reclaim 250 hectares of land along the coast by 2011.[5] The Kaohsiung Harbor Bureau plans to buy 49 hectares of the reclaimed land to establish a solar energy industrial district which would be in the harbor's free trade zone.[5]

Also known as the "Harbour Capital" of Taiwan, Kaohsiung has always had a strong link with the ocean and maritime transportation. Ferries play a key role in everyday transportation, and often play the role that buses do in other cities, especially for transportation across the harbour. With five terminals and 23 berths, the Port of Kaohsiung is Taiwan's largest container port and the 6th largest in the world.[7] In 2007 the port reached its handling capacity with a record trade volume of 10.2 million Twenty-foot equivalent units (TEU).[8] A new container terminal is under construction, increasing future handling capacity by 2 million TEU by 2013.[8]

Kaohsiung is one of the biggest ports in the world for importing shark fins, sold at high prices in the restaurants and shops of Taiwan and China. They are brought in from overseas and are placed out to dry in the sun on residential rooftops near the port.

Kaohsiung City is also home to Taiwan's second largest airport, the Kaohsiung International Airport, which is located in the Siaogang District in southern Kaohsiung City. 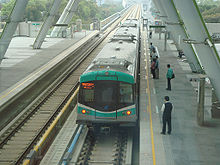 A new metro system, the Kaohsiung Mass Rapid Transit opened for revenue service in March 2008. A light rail line that circles central Kaohsiung City was also approved in 2007. In 2004, the Kaohsiung City Government and Siemens built a temporary two-station circular light rail line, along with one trainset, in Central Park, in order to demonstrate the feasibility of building a light rail system in Kaohsiung City. It was meant to alleviate some residents' concerns, such as producing excessive noise and hindering normal traffic flow, that light rail would negatively impact their surroundings. This Siemens Combino vehicle was later used as part of the defunct M>Tram network in Melbourne, later transferring to Yarra Trams.

The city is served by the Taiwan Railway Administration's Western Line and Pingtung Line. Taiwan High Speed Rail also serves Kaohsiung City via its new Zuoying Station in northern Kaohsiung City. Future plans include extending high speed rail to the new Kaohsiung Station in the city centre. The new Kaohsiung Station will be an underground station, replacing the current ground level station. Additionally, these two stations will also be served by Red line of Kaohsiung Rapid Transit System when the line opened for revenue service in early 2008. 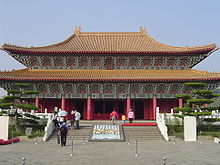 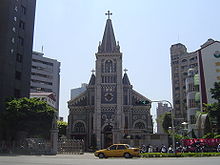 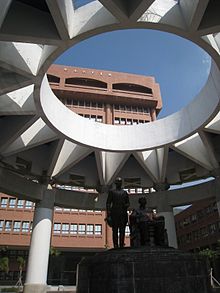 Kaohsiung hosted the OECC (OptoElectronics and Communications Conference) in 2006 and is scheduled to host it again in 2011.

Kaohsiung is twinned with the following locations.