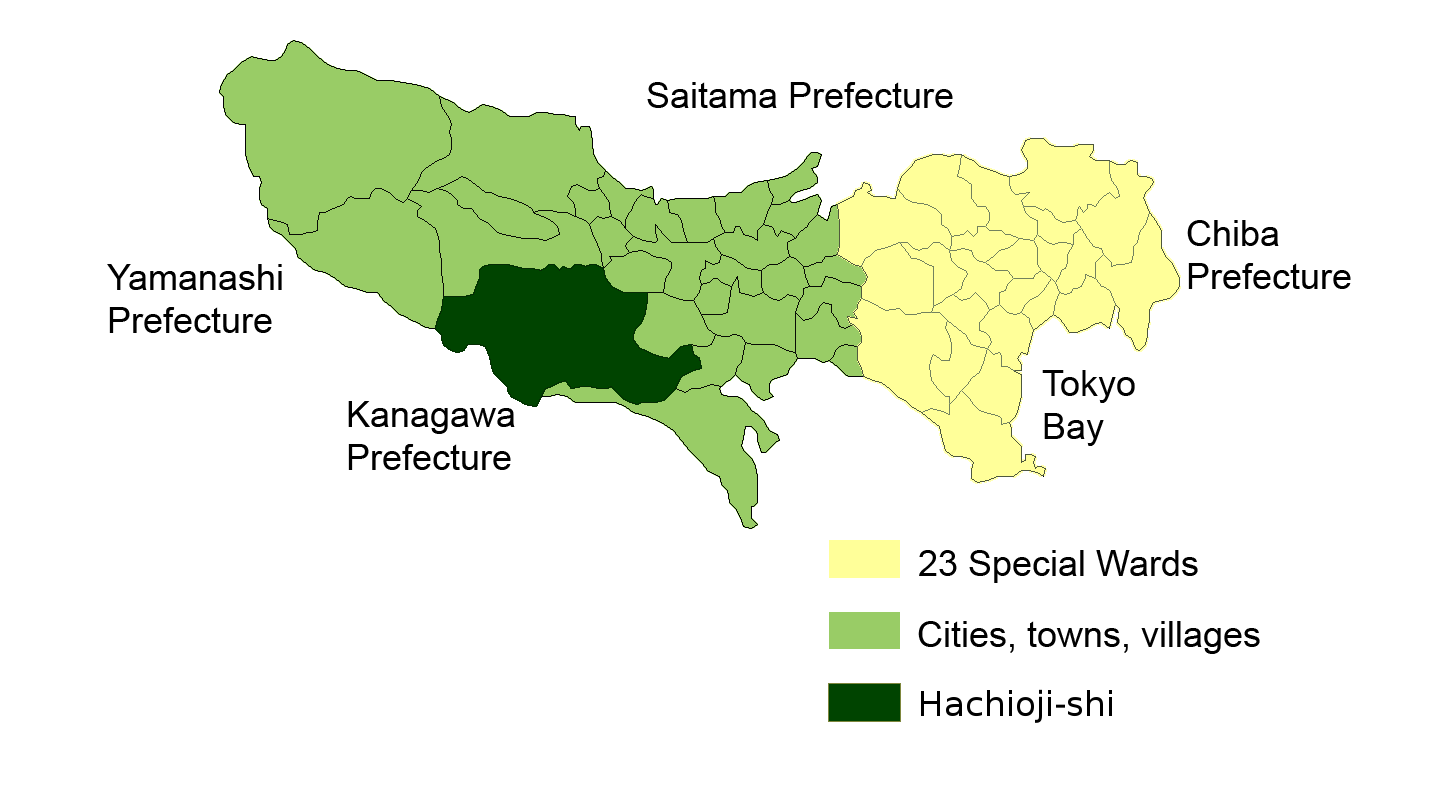 nihongo|Hachiōji|八王子市|Hachiōji-shi is a city located in , , about 40 kilometers west of the center of the special wards of Tokyo.

As of 2007, the city has an estimated of 542,712 and the density of 2,912.95/km². The total area is 186.31 km². It is the eighth largest city in the . The city is surrounded on three sides by mountains, forming the Hachiōji Basin which opens up toward the east in the direction of Tokyo. The mountain ranges in the southwest include (599 m) and (857 m), two popular hiking destinations which can be reached by train and bus, respectively. Two major national roads, Route 16 (which connects Kawagoe in the north with in the south) and Route 20, the former .

Although Hachiōji only gained city status on , , it has been an important junction point and post-town along the "", the main road that connected the historical (today's ) with Western Japan since medieval times, especially during the . For a short period of time, a castle, (八王子城; "Hachiōji-jō") existed in the area. It was built in 1584 by "Hōjō Ujiteru" (北条氏照), but was soon destroyed in 1590 during General 's attempt to gain control over all of Japan. During the , Hachiōji prospered as an important location for the production of silk and silk textiles. The industry faded away, however, in the 1960s. Today, Hachiōji mainly serves as a bed town for people working in Tokyo, and as a location for many large colleges and universities.

Hachiōji stretches over a vast area, combining such diverse parts as the densely populated city center and its shopping district with the hardly populated rural areas in the west. (599m) is a very popular hiking destination in the southwest, easily accessible through the Keio Takao Line. It is famous for the (高尾神社; "Takao-jinja") and the Shingon Buddhist temple "Takao-san Yakuōin Yūkiji" (高尾山薬王院有喜寺). The is also of interest. (855 m) is more difficult to reach, requiring a one-hour bus ride from the city center. It is popular, however, because of the scenic view toward .

Little remains of . A rare attraction, however, is the (多摩御陵; "Tama Goryō") in which the Taishō and Shōwa emperors are buried.

The JR East and the provide rail service to Hachiōji: JR eastward to and , westward to Sagamiko and ; Keio to Shinjuku.

The is a divided, limited-access that serves Hachiōji, roughly parallel to the Chūō Line. Hachiōji also lies on Japanese National Route 16 and Route 20.

The city operates its public elementary and junior high schools.

The metropolis operates the [http://www.hachioji-sb.metro.tokyo.jp/]

Private universities include:
*, which has a sister school in the USA, .
*