Movement for Rights and Freedoms

Movement for Rights and Freedoms

The Movement for Rights and Freedoms (Bulgarian: Движение за права и свободи, Dvizhenie za prava i svobodi; Turkish: Hak ve Özgürlükler Hareketi) is a centrist political party in Bulgaria, often described as an ethnic Turkish one. The MRF is a member of the Liberal International and considers itself a liberal party, rather like the Swedish People's Party - party of the Swedish-speaking minority of Finland. It has been chaired by Ahmed Dogan since its official establishment on 4 January 1990. 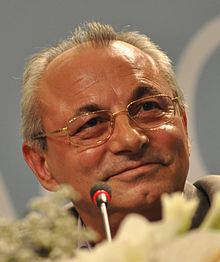 Ahmed Dogan has chaired the party since its official establishment

The party began as an underground organization in the 1980s by the name Turkish National Freedom Movement (Türk Millî Kurtuluş Hareketi) as a response to Todor Zhivkov's policy of forced bulgarization of the Turkish minority in the country.

On 8 October 1991, ninety-three members of Bulgaria's National Assembly — virtually all of them affiliated with the former Communist Party — asked the constitutional court to declare the MRF unconstitutional citing article 11.4 of the constitution which explicitly bans political parties "formed on ethnic, racial, and religious basis".[1] On 21 April 1992, the court rejected the petition and affirmed the constitutionality of the MRF.[2]

Even though the MRF has been legally a part of Bulgarian political life since then, some Bulgarian ultra-nationalists, particularly the far-right National Union Attack, continue to assert that it is anti-constitutional because it consists mainly of ethnic Turks.

However, the statute of the MRF states quite clearly that it "is an independent public and political organization, founded with the purpose of contributing to the unity of all Bulgarian citizens".[3]

Additionally, supporters of MRF argue that banning parties on the basis of their ethnic composition constitutes an instance of ethnic discrimination and is in contravention to European law, the Framework Convention for the Protection of National Minorities in particular to which Bulgaria is a signatory. Furthermore, despite a similar constitutional ban, religious parties, such as the Bulgarian Christian Coalition have competed for parliamentary elections since 1997, and again in 2005, without any political upheaval.

More recently, Antonina Zheliazkova, head of the Centre for Interethnic Relations in Sofia, praised Ahmed Dogan by stating that He has been working hard to open up the party to all citizens and has encouraged the MRF's supporters to be free to vote for non-ethnic parties.[4]

At present there are three other tiny Turkish political factions that oppose the MRF’s politics. These groups — which united to form the Balkan Democratic League — are the Movement of the Democratic Wing (DDK), led by Osman Oktay; the Party for Democracy and Justice (PDS), led by Nedim Gencev; and the Union of the Bulgarian Turks (SBT), led by Seyhan Türkkan.[4]

However, these movements, as well as the National Movement for Rights and Freedoms, member of a Social-Democratic coalition ('Rose coalition') failed to secure any elected representative, including through coalitions with non-ethnic parties, whereas the MRF became the third main Bulgarian party at the June 2005 parliamentary elections and entered a three-party coalition in August with the Bulgarian Socialist Party and the National Movement Simeon II.

The MRF was severely criticized by the Bulgarian ultra-nationalist party Attack as well as mainstream rightwing parties such as Democrats for a Strong Bulgaria and the Union of Democratic Forces and even by MRF coalition partners of the National Movement Simeon II for allegedly manipulating the vote in the June 2005 elections in some places by bringing Bulgarian citizens of Turkish origin living in Turkey to vote in the elections.[citation needed] However, allegations of ethnic Turks coming to vote in Bulgaria at their permanent address and then returning to Turkey to vote with their passports, could not be "verified or confirmed" by international observers, whose assessment on the election was that it was free and fair. [1]

In February 2005, the MRF opposed the privatisation of Bulgaria's largest tobacco company, Bulgartabak, which was backed by the government and the European Union, as on the grounds that the industry traditionally employs ethnic Turks. The resulting crisis led to the resignation of vice premier Lidia Shuleva.[4]