Democrats for a Strong Bulgaria

Democrats for a Strong Bulgaria

Democrats for a Strong Bulgaria (Bulgarian: Демократи за силна България, Demokrati za silna Bulgaria, ДСБ, DSB) is a political party in Bulgaria established by former Bulgarian Prime Minister Ivan Kostov (1997–2001). The motto of the party is "For a Strong Bulgaria in Unified Europe".

Kostov resigned as chairman of the United Democratic Forces after a painful election defeat in June 2001 to Simeon Saxe-Coburg-Gotha's newly established National Movement for Simeon II. The UDF had suffered heavily from allegations of corruption and increased unemployment after having carried out economic reforms during its four-year term.

With time 29 (out of 51) UDF MPs including Kostov grew increasingly dissatisfied with the new UDF leadership of chairwoman Nadezhda Mikhailova, who was the foreign minister in Kostov's own government. Following another defeat for the UDF in the 2003 local elections and after Nadezhda Mikhailova's refusal to bear the responsibility and resign, the group of 29 around Kostov announced their departure from the UDF and the formation of a new political force, the DSB.

DSB is a member of the European People's Party (EPP).

It has been chaired by Ivan Kostov since its establishment in May 2004. Deputy chairpersons are Veselin Metodiev and Ekaterina Mikhailova.

The DSB candidate for Mayor of Sofia, former finance minister and head of the Central Bank of Bulgaria Svetoslav Gavriyski arrived third in the first round with 18% of the votes.

The last political surveys (March'2006) show the serious decreasing of the people support for the Kostov's party. Less than only 4% of the political support moves today this party to a position behind BSP (socialists / communists party), ATAKA (nationalists party), NDSV (Simeon II former king party) and UDF.[citation needed] 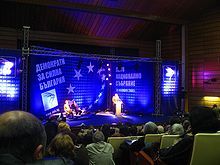 The fifth national meeting of the DSB in Sofia

The DSB define themselves as a moderately conservative, but also nationally oriented[1] party.

They regard themselves as successors of the ruling mandate of the United Democratic Forces (1997–2001) and promise to stand up for its achievements and build on them.

The party stands for a new structure, composition and organization of the constitutional powers in Bulgaria through the adoption of a new Constitution.

They propose a decrease in overall taxes, the creation of an investor-friendly tax and insurance environment and tax and insurance incentives to small and medium-sized enterprises and to companies that generate long-term employment. The DSB propose to reform the law enforcement institutions in order to cut off their connection with the criminal world and in order to abolish corruption. They also insist on making officials of the executive and the other branches of power fully accountable for their actions stripping them of their immunity.

They support the independence and public nature of the National Health Insurance Fund, the promotion of additional health insurance schemes through optional funds and competition between these funds.

The DSB stand for integration and coexistence of different ethnic communities on the basis of equality before the Law, regardless of religion, gender and origin and strongly oppose Ahmed Dogan, the leader of the Movement for Rights and Freedoms claiming that his "Bulgarian Ethnic Model" is one of separation and encapsulation of Bulgarian Turks, aimed at monopolizing their vote instead of integrating them in Bulgarian society. This opposition has often been wrongly referred to as anti-minority nationalism.

Kostov and the DSB are outspoken opponents of the Bulgarian Socialist Party whom they regard as the heir to the totalitarian Bulgarian Communist Party and define them as their main political enemy. They have also often criticized ex-Prime Minister Simeon Saxe-Coburg-Gotha for allying himself with the socialists and who is accused, very much like Kostov was, of corruption.

Kostov's government was the one to begin adhesion talks with the European Union back in 1999 and the DSB continue to support European orientation for the country.