Díaz Ordaz was born in San Andrés Chalchícomula (nowadays Ciudad Serdán, Puebla). His father, Ramón Díaz Ordaz Redonet, worked as an accountant, while his mother, Sabina Bolaños Cacho de Díaz Ordaz, worked as a school teacher. Díaz Ordaz graduated from the University of Puebla on 8 February 1937 with a law degree. He became a professor at the university and served as vice rector from 1940–1941. In 1943 he became a federal deputy for the first district of the state of Puebla, and served as a senator for the same state from 1946–1952. He served as the Secretary of Government in the cabinet of president Adolfo López Mateos from 1958–1964. On 1 December 1963, he became the candidate for the Institutional Revolutionary Party (PRI). The 1965 yearbook of Encyclopædia Britannica declared that despite facing only token opposition, Díaz Ordaz campaigned as if he were the underdog. He won the presidential election on 8 September 1964.

As president Díaz Ordaz was known for his authoritarian manner of rule over his cabinet and the country in general. His strictness was evident in his handling of a number of protests during his term, in which railroad workers, teachers, and doctors were fired for taking industrial action. When university students in Mexico City protested the government's actions around the time of the 1968 Summer Olympics, Díaz Ordaz oversaw the occupation of the National Autonomous University of Mexico and the arrest of several students, leading to the shooting of hundreds of unarmed protesters during the Tlatelolco massacre in downtown Mexico City, in 2 October 1968. The Mexican army fired ruthlessly at the unarmed students as well as many other people who let the students take shelter inside their homes.[citation needed] Statistics concerning the casualties of this incident vary, often for political reasons. Some people were kept imprisoned for several years. The crackdown would eventually be denounced by his successors, and ordinary Mexicans view the assault of unarmed students as an atrocity. The stain of Tlatelolco would remain on PRI rule for many years.

Life after the Presidency 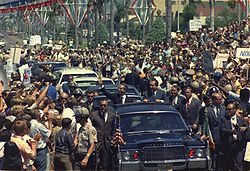 After his term expired, Díaz and his family vanished completely from the public eye; he was occasionally mentioned in newspapers (usually in a derogatory manner), seldom made interviews and was usually spotted only when voting in elections. In 1977, a break from this obscurity came as he was appointed as the first Ambassador to Spain in 38 years, previously broken due to Falangism. During his brief stint as Ambassador, he was met with a lot of hostility from both the Spanish media and the Mexican media alike as he was persistently asked questions about his actions as President, and resigned within several months due to this as well as health problems. Popular discontent led to a catchy phrase: "Al pueblo de España no le manden esa araña" (Don't send the people of Spain that spider). He died in Mexico City on 15 July 1979 of colorectal cancer.