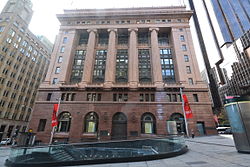 Commonwealth Bank building in Martin Place, Sydney, built in 1928 -- a notable example of the Beaux-Arts style 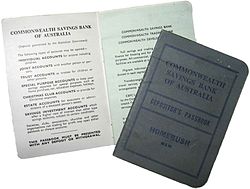 Founded in 1911 by the Australian government, the Commonwealth Bank is one of the 'big four' Australian banks, with National Australia Bank (NAB), ANZ and Westpac. The bank listed on the Australian Stock Exchange in 1991 and the government fully privatised it in 1996.

The Commonwealth Bank of Australia was founded by the Commonwealth Bank Act in 1911, introduced by the Andrew Fisher Labor Government, which favoured bank nationalisation. In a rare move for the time, the bank was to have both savings and general bank business. The bank was also the first bank in Australia to receive a Federal Government guarantee. The bank's earliest and most strenuous proponent was the flamboyant American-Australian Labor politician, King O'Malley, and its first Governor was Sir Denison Miller.

The bank opened its first branch in Melbourne on July 15, 1912. In an agreement with Australia Post that exists to this day, the bank also traded through post office agencies. In 1912 it merged with the state savings bank in Tasmania, and by 1913 it had branches in all six states.

In 1916 the bank moved its head office to Sydney. It also followed the Australian army into New Guinea, where it opened a branch in Rabaul and agencies elsewhere.

In 1920, the bank took over from the Department of the Treasury the responsibility for the issue of Australian bank notes, the beginning of its acquisition of central bank powers.[4]

In 1920, the Commonwealth Bank merged with the state savings bank in Queensland.

The bank's role in central banking expanded gradually after 1920. In 1931, the bank board came into conflict with the Labor government of James Scullin. The bank's chairman Robert Gibson refused to expand credit in response to the Great Depression (as had been proposed by Treasurer Edward Theodore) unless the government cut pensions, which Scullin refused to do. Conflict surrounding this issue led to the fall of the government, and to demands from Labor for reform of the bank and more direct government control over monetary policy.

In 1942, the Commonwealth Banking Corporation (CBC) suspended its operations in Papua New Guinea as the Japanese Army captured many of the towns in which it operated, and bombed Port Moresby. The bank resumed operations later, possibly in 1944.

The Commonwealth Bank received almost all central bank powers in emergency legislation passed during World War II and at the end of the war it used this power to begin a dramatic expansion of the economy. This was also the aim of the Government at the time. The Government attempted to compel the Australian states to conduct their banking with the Commonwealth under the Banking Act 1945 (Cth), but the High Court in Melbourne Corporation v Commonwealth (1947) 74 CLR 31, blocked this move. The government also colossally expanded immigration programmes. To respond to this, the bank established a Migrant Information Service (later known as the Australian Financial & Migrant Information Service [AFMIS]). The bank expanded during this period. In just five years it opened hundreds of branches throughout Australia and in 1951 it established a branch in the Solomon Islands.

From 1958 to 1976 the Commonwealth Bank operated savings bank agencies in the New Hebrides.

A new Commonwealth Development Bank was established in 1960 and during the 1970s the bank diversified its business into areas like insurance and travel. It established a finance company, CBFC in 1974. The bank also became more heavily involved in foreign currency trading and international banking in general.

The bank actively supported the introduction of decimal currency in the years leading up to 1966 and, like most banks, it gradually converted its paper records onto a new computer-based system. The bank created the first credit card in Australia in 1974 when it established Bankcard. In later years the bank began offering Mastercards (1984) and Visa (1993) cards as well.

In 1974, as Papua New Guinea approached independence, the bank formally handed over its PNG operations to the newly created and government-owned Papua New Guinea Banking Corporation (PNGBC). The bank retained a restricted branch in Port Moresby that it finally closed in 1982.

In 1991 the bank acquired the failing Victorian Government-owned State Bank of Victoria (est. 1842).

Between 1991 and 1996 the Australian government fully privatised Commonwealth Bank. It is a public company, but one of the few such companies in Australia whose official name does not end in 'Limited'.

In 1994 Commonwealth sold its shares in National Bank of Solomon Islands to Bank of Hawaii.

In 1994, Commonwealth took a 50% share in PT Bank International Indonesia.

On 10 March 2000, the Commonwealth Bank and Colonial Limited announced their intention to merge, with seven Commonwealth Bank shares being offered for twenty Colonial Shares. The merger received final approval from the Supreme Court of Victoria on 31 May 2000 and was completed on 13 June 2000. This brought into the fold Colonial’s stake in Colonial National Bank, the former National Bank of Fiji. The bank also acquired the remaining 25% of ASB Bank.

Banking opportunities in Asia saw the Bank in 2000 acquire full ownership of PT Bank International Indonesia and rename it (PT Bank Commonwealth). This bank now has over 16 branches and has opened several FX shops to cater to Commonwealth Bank clients who are tourists in Bali.

The Commonwealth Bank is Australia's largest retail bank and offers customers a range of products and services, including loans, credit cards, transaction and savings accounts. It has a wide presence in Australia with the largest branch and ATM network.[citation needed] It also offers services to people planning to move to Australia.[citation needed]

The Bank's service of business customers, ranging from small business owners to large institutional clients, is diverse and draws upon the products and services offered by all divisions of the Commonwealth Bank group.[citation needed]