Mastercard Incorporated (NYSE: MA) or MasterCard Worldwide is an American multinational financial services corporation with its headquarters in the MasterCard International Global Headquarters, Purchase, Harrison, New York, United States.[1] Throughout the world, its principal business is to process payments between the banks of merchants and the card issuing banks or credit unions of the purchasers who use the "MasterCard" brand debit and credit cards to make purchases. MasterCard Worldwide has been a publicly traded company since 2006. The company was created by two entrepreneurs in Louisville, Ky. named Raymond Tanenhaus and Stanley Benovitz. It was absorbed by the United California Bank in year 1966. Prior to its initial public offering, MasterCard Worldwide was a cooperative owned by the 25,000+ financial institutions that issue its card.

In 1966 the aforementioned group of California banks formed the Interbank Card Association (ICA). With the help of New York's Marine Midland Bank, now HSBC Bank USA, these banks joined with the ICA to create "Master Charge: The Interbank Card". The card was given a significant boost in 1969, when First National City Bank joined, merging its proprietary Everything Card with Master Charge.

In 1979, "Master Charge: The Interbank Card" was renamed simply "MasterCard". In the early 1990s MasterCard bought the British Access card and the Access name was dropped. In 2002, MasterCard International merged with Europay International SA, another large credit-card issuer association, which for many years issued cards under the name Eurocard.

In 2006, MasterCard International underwent another name change to MasterCard Worldwide. This was done in order to suggest a more global scale of operations. In addition, the company introduced a new corporate logo adding a third circle to the two that had been used in the past (the familiar card logo, resembling a Venn diagram, remains unchanged). A new corporate tagline was introduced at the same time: "The Heart of Commerce".[3]

The company, which had been organized as a cooperative of banks, had an initial public offering on May 25, 2006 at $39.00 USD. The stock is traded on the NYSE under the symbol MA.

Both MasterCard and Visa have paid approximately $3 billion in damages resulting from a class-action lawsuit filed by Hagens Berman in January 1996.[4] The litigation cites several retail giants as plaintiffs, including Wal-Mart, Sears Roebuck & Company, and Safeway.[5]

In October 2010, Visa and MasterCard reached a settlement with the U.S. Justice Department in another antitrust case. The companies agreed to allow merchants displaying their logos to decline certain types of cards (because interchange fees differ), or to offer consumers discounts for using cheaper cards.[6]

The European Union has repeatedly expressed concern over the dominance of Mastercard. In April 2009, Mastercard reached a settlement with the European Union in an antitrust case, promising to reduce debit card payments to 0.2 percent of a purchase.[7] In December 2010, a senior official from the European Central Bank called for a break-up of the Visa/Mastercard duopoly by creation of a new European debit card for use in the Single Euro Payments Area (SEPA).[8] After Mastercard's blocking of payments to WikiLeaks, members of European Parliament expressed concern that payments from European citizens to a European corporation could apparently be blocked by America, and called for a further reduction in the dominance of Visa and Mastercard in the European payment system.[9]

In December 2010, MasterCard blocked all payments to WikiLeaks due to claims that they engage in illegal activity.[11] In a response a group of online activists calling themselves "Anonymous" organised a denial-of-service attack, as a result the MasterCard website experienced downtime on December 8–9, 2010.[12] Wikileaks spokesman said: “We neither condemn nor applaud these attacks."[13] U.N. High Commissioner for Human Rights, Navi Pillay said that closing down credit lines for donations to WikiLeaks "could be interpreted as an attempt to censor the publication of information, thus potentially violating WikiLeaks' right to freedom of expression".[14] The company that enables Wikileaks to accept credit and debit card donations says it will take legal action against Visa Europe and Mastercard.[15] IT firm Datacell said it would move immediately to try to force the two companies to resume allowing payments to the anti-secrecy website. Iceland-based Datacell had earlier said that suspension of payments towards Wikileaks is a violation of the agreements with their customers. Visa Europe and Mastercard have yet to comment on the legal threat. In view of MasterCard's stand on WikiLeaks crisis, MasterCard has been mocked widely across the internet as users lampooned its distinctive advertising slogans: "Freedom of speech: priceless. For everything else, there's MasterCard".

MasterCard's current advertising campaign tagline is "Priceless". The slogan associated with the campaign is "There are some things money can't buy. For everything else, there's MasterCard." The Priceless campaign in more recent iterations has been applicable to both MasterCard's credit card and debit card products. They also use the 'Priceless' description to promote products such as their "priceless travel" site which features deals and offers for MasterCard holders,[16] and "priceless cities", offers for people in specified locations.[17]

The first of these Priceless ads was run during the World Series in 1997 and there are numerous different TV, radio and print ads.[18] It was idealized by Stewart Emery.[19] MasterCard registered Priceless as a trademark.[20] Actor Billy Crudup has been the voice in the US market; in the UK, actor Jack Davenport is the voice. The original idea and concept of the campaign stems from copywriter Joyce King Thomas and art director Jeroen Bours from the Advertising Agency of McCann Erickson (so called in 1997, today named: McCann Worldwide).[21]

The purpose of the campaign is to position MasterCard as a friendly credit card company with a sense of humor, as well as respond to the public's worry that everything is being commodified and that people are becoming too materialistic.[22]

Many parodies have been made using this same pattern, especially on Comedy Central, though MasterCard has threatened legal action,[23] contending that MasterCard views such parodies as a violation of its rights under the federal and state trademark and unfair competition laws, under the federal and state anti-dilution laws, and under the Copyright Act. Despite these claims, however, noted US consumer advocate and presidential candidate Ralph Nader emerged victorious (after a four-year battle) in the suit MasterCard brought against him after he produced his own "Priceless" political commercials.[24] In the election ads Nader had criticized the corporate financing of both the Bush and Gore campaigns. Using the theme and some of the language behind the MasterCard "Priceless" campaign the election specified the dollar amounts contributed by corporate interests to both candidates and then summed it up with "finding out the truth ... priceless." Mastercard sued Nader's campaign committee and filed a temporary restraining order to stop the ads. The TRO was not granted and Nader defended the ads by claiming they were protected under the fair use doctrine. Mastercard ultimately lost to Nader making "Priceless" very expensive indeed. http://lawgeek.typepad.com/lawgeek/2004/03/nader_wins_pric.html

Through a new partnership with an Internet company that specializes in personalized shopping, MasterCard introduced a Web shopping mall on April 16, 2010 that it says can pinpoint with considerable accuracy what its cardholders are likely to purchase.[25]

The MasterCard MarketPlace site relies on technology developed by Next Jump, a company that monitors customer behavior from thousands of retailers and uses the data it gathers to help merchants tailor their product offerings.

Mastercard engages in the sponorship of major sporting events throughout the world. These include the New Zealand All Blacks the country's rugby team,[26] the UEFA Champions League, the PGA Tour's Arnold Palmer Invitational Presented by Mastercard,[27] the Canadian Hockey League's Memorial Cup and recently announced a new sponsorship deal with Australian Cricket team and is also the founding sponsor of IPL cricket team Mumbai Indians.[28]

Previously it also sponsored FIFA World Cup but withdrew its contract after a court settlement and its rival Visa took up the contract in 2007.[29] and in 1997, MasterCard was the main sponsor of the aborted MasterCard Lola Formula One team.

On October 12, 2007 MasterCard offered $160,000 to the municipal government of Toronto so that the city could keep its ice rinks open, as the city was facing a budget shortfall.[30]

Management and Board of Directors

As of December 2004, the following banks are represented on MasterCard's board of directors:[citation needed]

MasterMoney is the branding of a MasterCard debit card distributed in North America. Like many debit cards, the brand has capabilities of being used as an ATM card as well as a credit card, providing sufficient funds are in one's bank account (usually a checking account) in order to complete a transaction. 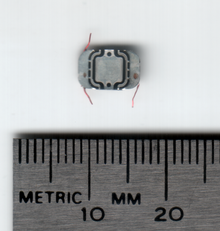 PayPass RFID chip from a MasterCard.

MasterCard PayPass is an EMV compatible, "contactless" payment feature based on the ISO/IEC 14443 standard that provides cardholders with a simpler way to pay by tapping a payment card or other payment device, such as a phone or key fob, on a point-of-sale terminal reader rather than swiping or inserting a card.

In 2003, MasterCard concluded a nine-month PayPass market trial in Orlando, Florida, with JPMorgan Chase, Citibank, and MBNA. More than 16,000 cardholders and more than 60 retailer locations participated in the market trial. In addition, MasterCard worked with Nokia, AT&T Wireless, and JPMorgan Chase to incorporate MasterCard PayPass into mobile phones using Near Field Communication technology, in Dallas, Texas. PayPass is expected to be integrated into mobile phones soon.[33]

In 2005, MasterCard began to roll out PayPass in certain markets. As of September 2011, the following financial institutions have issued cards that feature MasterCard PayPass:

A U.S. issued HSBC Debit MasterCard with PayPass can be used in the U.K.

MasterCard Europe operated a Network known as EPS-Net – this interfaced Banknet but it was decommissioned in January 2010. EPS-Net is used to link Issuers and Acquirers for Online POS/ATM Transaction Processing.

On December 9, 2010 the servers of Mastercard underwent a massive attack[38] as part of a Operation Avenge Assange for closing down payments of whistleblowing platform Wikileaks. According to several news sites, security of thousands of credit cards was compromised during that attack due to a phishing-site set up by the attackers;[39] however, Mastercard denied this, stating that "cardholder account data has not been placed at risk".