pronunciation (help·info)), the largest town in North Otago, in the South Island of New Zealand, is the main town in the Waitaki District. It is 80 kilometres south of Timaru and 120 kilometres north of Dunedin, on the Pacific coast, and State Highway 1 and the railway Main South Line connects it to both. Oamaru's historic status as the second centre in the Otago Region (after Dunedin) appears under threat from the growth of Queenstown in Central Otago. The Air New Zealand subsidiary Eagle Airways provides regular flights from Oamaru Airport to Christchurch.

The name Oamaru apparently derives from Māori words meaning the place of Maru (compare with Timaru). The identity of Maru remains open to conjecture.

There are some important archaeological sites around Oamaru. Those at the Waitaki River mouth and at Awamoa both date from the Archaic (Moa-hunter) phase of Māori culture, when New Zealand's human population clustered along the south-east coast from about 1100 AD. The Waitaki River mouth had at least 1,200 ovens. Awamoa saw the first archaeological excavation in New Zealand when W.B.D. Mantell dug there at Christmas 1847 and in 1852. Smaller Archaic sites exist at Cape Wanbrow and at Beach Road in central Oamaru. The distinctive Archaic art of the Waitaki Valley rock shelters dates from this period — some of it presumably made by the occupants of these sites. The area also features Classic and Protohistoric sites, from after about 1500 AD, at Tamahaerewhenua, Tekorotuaheka, Te Punamaru, Papakaio and Kakanui.[2]

Māori tradition tells of the ancient people Kahui Tipua building a canoe, Arai Te Uru, which sailed from southern New Zealand to the ancestral Polynesian homeland, Hawaiki, to obtain kumara. On its return it became waterlogged off the Waitaki River mouth, lost food baskets at Moeraki beach and ended up wrecked at Matakaea (Shag Point) where it turned into Danger Reef. After the wreck a crew member, Pahihiwitahi, seeking water, discovered the Waitaki River, but on returning south and failing to reach the wreck before dawn he was turned into a hill in the Shag Valley. Modern academics have suggested this tale is an allegorical explanation of the fact that kumara will not grow south of Banks Peninsula.

View of Oamaru and the coast to the north, from above the south end of the town

On 20 February 1770 James Cook in the Endeavour reached a position very close to the Waitaki mouth and "about 3 Miles from the shore" according to his journal. He said the land "here is very low and flat and continues so up to the skirts of the Hills which are at least 4 or 5 Miles in land. The whole face of the Country appears barren, nor did we see any signs of inhabitants." He stayed on this part of the coast four days. Sydney Parkinson, the expedition's artist, described what seems to be Cape Wanbrow, in Oamaru. On 20 February he wrote "...we were near the land, which formed an agreeable view to the naked eye. The hills were of a moderate height, having flats that extended from them a long way, bordered by a perpendicular rocky cliff next to the sea."

Māori did live in the area, and sealers visited the coast in 1814. The Creed manuscript, discovered in 2003, records:

Some of the [local] people [had been] absent on a feasting expedition to meet a great party from Taumutu, Akaroa, Orawenua [Arowhenua]. They were returning. The [sealers'] boat passed on to the Bluff 8 miles north of Moeraki where they landed & arranged their boat - & lay down to sleep in their boat. At night Pukuheke, father of Te More, went to the boat, found them asleep & came back to the other Natives south of the Bluff. They went with 100 [men] killing 5 Europeans & eat them. Two of the seven escaped through the darkness of the night & fled as far as Goodwood, Bobby's Head, after being 2 days and nights on the way.

Pukeheke's party killed and ate these as well. The Pākehā, a party from the Matilda (Captain Fowler), under the first mate Robert Brown with two other Europeans and five lascars or Indian seamen, made eight in all, not seven as the manuscript says. They had been sent in an open boat from Stewart Island in search of a party of absconding lascars. Brown must have had some reason for searching for them on the North Otago coast.

After Te Rauparaha's sack of the large pa (fortified settlement) at Kaiapoi near modern Christchurch in 1831, refugees came south and gained permission to settle at Kakaunui (Kakanui), and the territory between Pukeuri and Waianakarua, including the site of urban Oamaru, became their domain.[3] 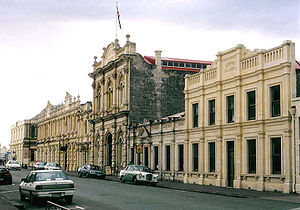 Whalers sometimes visited this part of the coast in the 1830s. The Jason, for example, probably of New London in the United States, Captain Chester, was reported at "Otago Bluff" south of Kakanui, with 2,500 barrels (400 m3) of oil, on 1 December 1839.[4]

Edward Shortland visited the area in 1844, coming overland from Waikouaiti. On January 9 he recorded "Our path to-day was sometimes along the edge of a low cliff, sometimes along the beach, till we approached Oamaru point, where it turned inland, and crossed a low range of hills, from which we looked over an extensive plain ... Towards the afternoon, we ascended a range of hills called Pukeuri, separating this plain from another more extensive. The sky was so remarkably clear that, from the highest point of the pathway, Moeraki was distinctly in view..." He made a map and placed Oamaru on it. He was one of several Europeans who passed through the area on foot in the 1840s. James Saunders became the first European resident of the district some time before 1850 when he settled to trade among the Māori of the Waitaki River mouth.[5] 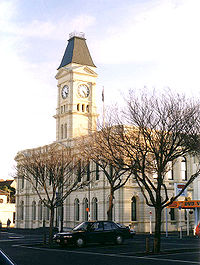 More European settlers arrived in the Oamaru area in the 1850s. Hugh Robison built and lived in a sod hut by the Oamaru Creek in 1853 while establishing his sheep run. J.T. Thomson surveyed the place as a town in 1859, and the Otago Provincial government declared "hundreds" there on 30 November 1860. The town grew as a service-centre for the agricultural/pastoral hinterland between the Kakanui Mountains and the Waitaki River, and rapidly became a major port, starting construction of a breakwater in 1871. For many years there was a commercial and fishing harbour under Cape Wanbrow at Friendly Bay.

With the development of pastoralism and the associated frozen-meat industry having its historical origins in New Zealand just south of the town at Totara, Oamaru flourished. Institutions such as the Athenaeum and Waitaki Boys' and Waitaki Girls' High Schools sprang up. The locally plentiful limestone (Oamaru stone) lent itself to carving and good designers, such as J.M. Forrester (1865–1965) and craftsmen utilised it. By the time of the depression of the 1880s Oamaru had become the "best built and most mortgaged town in Australasia". [6]

Development slowed, but the population continued to grow until the 1970s. With the closure of the port and the New Zealand economy stalled Oamaru found itself hard hit. In response it started to re-invent itself, becoming one of the first New Zealand towns to realise its built heritage was an asset.

A public art gallery, the Forrester, opened in 1983 in R.A. Lawson's neo-classical Bank of New South Wales building. Restoration of other buildings also took place. A trust formed, and work began restoring the historic precinct beside the port, perhaps the most atmospheric urban area in New Zealand. By the early 21st century, "heritage" had become a conspicuous industry.

Many of the early works of Janet Frame, who grew up in the town, reflect Oamaru conditions and Oamaruvians. Other literary associations include those with Owen Marshall, Greg McGee and Fiona Farrell Poole. Other prominent persons born and educated in Oamaru include Des Wilson, founder of the UK homelessness charity, Shelter; Australian Prime Minister Chris Watson; New Zealand politicians Arnold Nordmeyer and William Steward; Cardinal Thomas Stafford Williams; Malcolm Grant, President and Provost of University College London; and current[update] All Blacks rugby union captain Richie McCaw. Fred Allen, an All Black of the 1940s who went on to coach the All Blacks to 14 wins from his 14 tests in the 1960s, was born in Oamaru, though not educated there.

The world first learned of the death of Robert Scott and the members of his team on their return from the ill-fated expedition to the South Pole by way of a cable sent from Oamaru, on 10 February 1913.

E.A. Gifford (1819 – 1894), an artist and Royal Academician, lived in Oamaru from 1877 to 1885 and from 1892 until his death. A genre, portrait and landscape painter he established a national reputation. The art world remembers him for works like his Auckland from the Wharf of 1887, probably the best-known image of 19th-century Auckland.

Emily Gillies, a 19th-century Oamaru artist, was the daughter of C.H. Street, maternal niece of Edward Lear (1812 – 1888), the famous English watercolourist and writer of humorous verse. Lear's sister had virtually brought her brother up. When he died childless before her she inherited his residuary collection. The internationally significant group of works came to North Otago, where it remained intact until the early 1970s.

The artist Colin McCahon (1919–1987) lived in Oamaru in 1930–1931, attending the Middle School. The place and the North Otago landscape made an impression on him. He revisited the area several times as an adult on painting trips. Cartoonist John Kent, who authored the Varoomshka comic strip for The Guardian newspaper in England, hailed from Oamaru.

A strong community of living artists exists[update], and many dealer galleries have premises in the historic precinct. One of the town's principal living artists, Donna Demente, produces portraits and masks. At least partly through her work Oamaru hosts an annual mask festival each July, the "Midwinter Masquerade". Another annual celebration, a Victorian Heritage fête, takes place in November.

Some points of interest 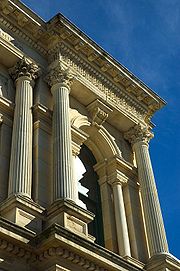 A building made of Oamaru stone, in the neo-classical style

Many public buildings are built of local limestone, quarried especially near Weston, and known as Oamaru stone. The southern part of Oamaru's main business district ranks as one of New Zealand's most impressive streetscapes[citation needed] due to the many prominent buildings constructed from this material. This and another part of the town close to the harbour have been preserved as historic precincts.

Most of the streets in Oamaru take their names from rivers in England, particularly rivers in the northwest and southeast of the country. The main retail and commercial areas line Thames Street; State Highway 1 running south follows Severn Street, and historic commercial buildings dominate Tyne Street.

A colony of little blue penguins lives on the harbour, and a colony of yellow-eyed penguins just south of the town attracts ecotourists. Penguins sometimes live under buildings close to the beach, including the town's music club, The Penguin Club.

Oamaru is the eastern gateway to the Mackenzie Basin, via the Waitaki Valley.

Shibboleth: The southern (Kāi Tahu) dialect of Māori ignores the first A in the name (AUH-muh-ROO). Northern Māori speakers prefer to stress the A (o-UH-muh-ROO). Thus one can guess whether a speaker comes from Otago — as in the audio here — or from further north.

The Oamaru Mail, published from Mondays to Fridays, has its base in Oamaru as well as the Waitaki Herald, both Wednesdays and Fridays. The town is within the coverage area of Radio Dunedin and within the circulation area of the Otago Daily Times, based in Dunedin. Oamaru has its own community television station, "45 South Television", which transmits from Cape Wanbrow on UHF channel 41.

Oamaru will be the end point of the Alps to Ocean Cycle Trail from Aoraki/Mount Cook, the trail to be constructed in the following years after approval in 2010 by the New Zealand Cycle Trail project.

Janet Frame fictionalised the Oamaru of her childhood as "Waimaru".