A derivative instrument is a contract between two parties that specifies conditions—in particular, dates and the resulting values of the underlying variables—under which payments, or payoffs, are to be made between the parties.[1][2] The term "Derivative" indicates that it has no independent value, i.e. its value is entirely "derived" from the value of the underlying asset. The underlying asset can be securities, commodities, bullion, currency, live stock or anything else. In other words, Derivative means a forward, future, option or any other hybrid contract of pre determined fixed duration, linked for the purpose of contract fulfillment to the value of a specified real or financial asset or to an index of securities.

Under U.S. law and the laws of most developed countries, derivatives have special legal exemptions which make them a particularly attractive legal form through which to extend credit. [3] However, the strong creditor protections afforded to derivatives counterparties--in combination with their complexity and lack of transparency--can cause capital markets to underprice credit risk. This can contribute to credit booms, and increase systemic risks. [3] Indeed, the use of derivatives to mask credit risk from third parties while protecting derivative counterparties contributed to both the financial crisis of 2008 in the United States and the European sovereign debt crises in Greece and Italy. [3][4] Financial reforms within the U.S. since the financial crisis have only served to reinforce special protections for derivatives--including greater access to government guarantees--while minimizing disclosure to broader financial markets. [5]

Derivatives can be used for speculating purposes ("bets") or to hedge ("insurance"). For example, a speculator may sell deep in-the-money naked calls on a stock, expecting the stock price to plummet, but exposing himself to potentially unlimited losses. Very commonly, companies buy currency forwards in order to limit losses due to fluctuations in the exchange rate of two currencies.

Third parties can use publicly available derivatives prices as educated predictions of uncertain future outcomes, for example, the likelihood that a corporation will default on its debts. [7]

Derivatives are used by investors to:

Derivatives allow risk related to the price of the underlying asset to be transferred from one party to another. For example, a wheat farmer and a miller could sign a futures contract to exchange a specified amount of cash for a specified amount of wheat in the future. Both parties have reduced a future risk: for the wheat farmer, the uncertainty of the price, and for the miller, the availability of wheat. However, there is still the risk that no wheat will be available because of events unspecified by the contract, such as the weather, or that one party will renege on the contract. Although a third party, called a clearing house, insures a futures contract, not all derivatives are insured against counter-party risk. 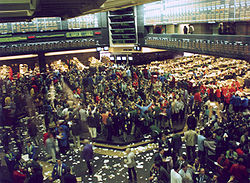 Derivatives traders at the Chicago Board of Trade

Individuals and institutions may also look for arbitrage opportunities, as when the current buying price of an asset falls below the price specified in a futures contract to sell the asset.

Speculative trading in derivatives gained a great deal of notoriety in 1995 when Nick Leeson, a trader at Barings Bank, made poor and unauthorized investments in futures contracts. Through a combination of poor judgment, lack of oversight by the bank's management and regulators, and unfortunate events like the Kobe earthquake, Leeson incurred a US$1.3 billion loss that bankrupted the centuries-old institution.[13]

In broad terms, there are two groups of derivative contracts, which are distinguished by the way they are traded in the market:

Some of the common variants of derivative contracts are as follows:

Swaps can basically be categorized into two types:

Some common examples of these derivatives are:

Other examples of underlying exchangeables are:

Economic function of the derivative market

Some of the salient economic functions of the derivative market include:

In a nutshell, there is a substantial increase in savings and investment in the long run due to augmented activities by derivative Market participant.[21]

Two common measures of value are:

For exchange-traded derivatives, market price is usually transparent, making it difficult to automatically broadcast prices. In particular with OTC contracts, there is no central exchange to collate and disseminate prices.

The arbitrage-free price for a derivatives contract can be complex, and there are many different variables to consider. Arbitrage-free pricing is a central topic of financial mathematics. For futures/forwards the arbitrage free price is relatively straightforward, involving the price of the underlying together with the cost of carry (income received less interest costs), although there can be complexities.

However, for options and more complex derivatives, pricing involves developing a complex pricing model: understanding the stochastic process of the price of the underlying asset is often crucial. A key equation for the theoretical valuation of options is the Black–Scholes formula, which is based on the assumption that the cash flows from a European stock option can be replicated by a continuous buying and selling strategy using only the stock. A simplified version of this valuation technique is the binomial options model.

OTC represents the biggest challenge in using models to price derivatives. Since these contracts are not publicly traded, no market price is available to validate the theoretical valuation. And most of the model's results are input-dependant (meaning the final price depends heavily on how we derive the pricing inputs).[24] Therefore it is common that OTC derivatives are priced by Independent Agents that both counterparties involved in the deal designate upfront (when signing the contract).

Derivatives are often subject to the following criticisms:

The use of derivatives can result in large losses because of the use of leverage, or borrowing. Derivatives allow investors to earn large returns from small movements in the underlying asset's price. However, investors could lose large amounts if the price of the underlying moves against them significantly. There have been several instances of massive losses in derivative markets, such as:

Some derivatives (especially swaps) expose investors to counter party risk. Different types of derivatives have different levels of counter-party risk. For example, standardized stock options by law require the party at risk to have a certain amount deposited with the exchange, showing that they can pay for any losses; banks that help businesses swap variable for fixed rates on loans may do credit checks on both parties. However, in private agreements between two companies, for example, there may not be benchmarks for performing due diligence and risk analysis.

Derivatives typically have a large notional value. As such, there is the danger that their use could result in losses that the investor would be unable to compensate for. The possibility that this could lead to a chain reaction ensuing in an economic crisis, has been pointed out by famed investor Warren Buffett in Berkshire Hathaway's 2002 annual report. Buffett called them 'financial weapons of mass destruction.' The problem with derivatives is that they control an increasingly larger notional amount of assets and this may lead to distortions in the real capital and equities markets. Investors begin to look at the derivatives markets to make a decision to buy or sell securities and so what was originally meant to be a market to transfer risk now becomes a leading indicator. (See Berkshire Hathaway Annual Report for 2002)

Leverage of an economy's debt

Derivatives massively leverage the debt in an economy, making it ever more difficult for the underlying real economy to service its debt obligations, thereby curtailing real economic activity, which can cause a recession or even depression. In the view of Marriner S. Eccles, U.S. Federal Reserve Chairman from November, 1934 to February, 1948, too high a level of debt was one of the primary causes of the 1920s–30s Great Depression. (See Berkshire Hathaway Annual Report for 2002)

The use of derivatives also has its benefits:

In the context of a 2010 examination of the ICE Trust, an industry self-regulatory body, Gary Gensler, the chairman of the Commodity Futures Trading Commission which regulates most derivatives, was quoted saying that the derivatives marketplace as it functions now "adds up to higher costs to all Americans." More oversight of the banks in this market is needed, he also said. Additionally, the report said, "[t]he Department of Justice is looking into derivatives, too. The department’s antitrust unit is actively investigating 'the possibility of anticompetitive practices in the credit derivatives clearing, trading and information services industries,' according to a department spokeswoman."[29]

Over-the-counter dealing will be less common as the 2010 Dodd-Frank Wall Street Reform Act comes into effect. The law mandated the clearing of certain swaps at registered exchanges and imposed various restrictions on derivatives. To implement Dodd-Frank, the CFTC developed new rules in at least 30 areas. The Commission determines which swaps are subject to mandatory clearing and whether a derivatives exchange is eligible to clear a certain type of swap contract.