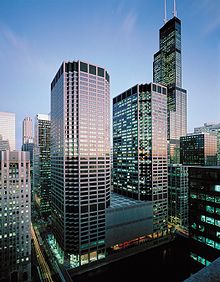 The Chicago Mercantile Exchange (CME) (often called "the Chicago Merc," or "the Merc") is an American financial and commodity derivative exchange based in Chicago. The CME was founded in 1898 as the Chicago Butter and Egg Board. Originally, the exchange was a non-profit organization. The exchange demutualized in November 2000, went public in December 2002, and it merged with the Chicago Board of Trade in July 2007 to become a designated contract market of the CME Group Inc. The Chief Executive Officer of CME Group is Craig S. Donohue.[1][2] On August 18, 2008 shareholders approved a merger with the New York Mercantile Exchange (NYMEX) and COMEX. The Merc, CBOT, NYMEX and COMEX are now markets owned by the CME Group.

CME trades several types of financial instruments: interest rates, equities, currencies, and commodities. It also offers trading in alternative investments such as weather and real estate derivatives, and has the largest options and futures contracts open interest (number of contracts outstanding) of any futures exchange in the world.

On October 7, 2008, the Chicago Mercantile Exchange (CME) Group announced that it will be teaming up with Citadel LLC to create a transparent electronic trading platform for credit default swaps.[3] The joint venture between CME and Citadel will operate as an independent organization with its own board of directors and management team.[4] The new venture plans to initially provide clearing services for contracts involving credit-default swap indices, which typically have more standardized terms than swap contracts for individual bonds. It is expected to eventually expand its offering to include other derivative indices as well as the multitude of single-name corporate derivatives.[5][6] Major market participants will be invited to join the platform as founding members, in return for receiving a 30% equity portion of the venture.[3]

Trading is conducted in two methods; an open outcry format and the CME Globex electronic trading platform. Approximately 80 percent of total volume at the exchange occurs electronically on CME Globex.

Operating during regular trading hours (RTH), the open outcry method consists of floor traders standing in a trading pit to call out orders, prices, and quantities of a particular commodity. Different colored jackets are worn by the traders to indicate their function on the floor (traders, runners, CME employees, etc.). In addition, complex hand signals (called Arb) are used. These hand signals were first used in the 1970s. The pits are areas of the floor that are lowered to facilitate communication, sort of like a miniature amphitheater. The pits can be raised and lowered depending on trading volume. To an onlooker, the open outcry system can look chaotic and confusing, but in reality the system is a tried and true method of accurate and efficient trading. An illustrated project to record the hand signal language used in CME's trading pits has been compiled[7]. 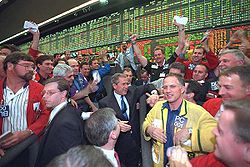 Operating virtually around the clock, today the CME Globex trading system is at the heart of CME. Proposed in 1987, it was introduced in 1992 as the first global electronic trading platform for futures contracts. This fully electronic trading system allows market participants to trade from booths at the exchange or while sitting in a home or office thousands of miles away. On 19 October 2004, the one billionth (1,000,000,000) transaction was recorded.

When Globex was first launched, it used Reuters' technology and network. September 1998 saw the launch of the second generation of Globex using a modified version of the NSC trading system, developed by Paris Bourse for the MATIF (now Euronext).

To connect to Globex, traders connect via Market Data Protocol (MDP) and iLink 2.0 for order routing.

On March 17, 2008, the New York Mercantile Exchange (NYMEX) accepted an offer from CME Group, the parent of the Chicago Mercantile Exchange, to purchase NYMEX for $8.9 billion in cash and CME Group Stock.[16] The acquisition was formally completed on August 22, 2008, and the NYMEX systems were fully integrated by September 30, 2009.[17]