In finance, speculation is a financial action that does not promise safety of the initial investment along with the return on the principal sum.[1] Speculation typically involves the lending of money for the purchase of assets, equity or debt but in a manner that has not been given thorough analysis or is deemed to have low margin of safety or a significant risk of the loss of the principal investment. The term, "speculation," which is formally defined as above in Graham and Dodd's 1934 text, Security Analysis, contrasts with the term "investment," which is a financial operation that, upon thorough analysis, promises safety of principal and a satisfactory return.[1]

In a financial context, the terms "speculation" and "investment" are actually quite specific. For instance, although the word "investment" is commonly used to mean any act of placing money in a financial vehicle with the intent of producing returns over a period of time, most ventured money—including funds placed in the world's stock markets—is technically not investment, but speculation.

Speculators may rely on an asset appreciating in price due to any of a number of factors that cannot be well enough understood by the speculator to make an investment-quality decision. Some such factors are shifting consumer tastes, fluctuating economic conditions, buyers' changing perceptions of the worth of a stock security, economic factors associated with market timing, the factors associated with solely chart-based analysis, and the many influences over the short-term movement of securities.

Financial speculation can involve the trade (buying, holding, selling) and short-selling of stocks, bonds, commodities, currencies, collectibles, real estate, derivatives, or any valuable financial instrument to attempt to profit from fluctuations in its price irrespective of its underlying value.

In architecture, speculation is used to determine works that show a strong conceptual and strategic focus.[2]

Identifying speculation can be best done by distinguishing it from investment. According to Ben Graham in Intelligent Investor, the prototypical defensive investor is "...one interested chiefly in safety plus freedom from bother." He admits, however, that "...some speculation is necessary and unavoidable, for in many common-stock situations, there are substantial possibilities of both profit and loss, and the risks therein must be assumed by someone."[3] Many long-term investors, even those who buy and hold for decades, may be classified as speculators, excepting only the rare few who are primarily motivated by income or safety of principal and not eventually selling at a profit.[citation needed]

Speculating is the assumption of risk in anticipation of gain but recognizing a higher than average possibility of loss. The term speculation implies that a business or investment risk can be analyzed and measured, and its distinction from the term Investment is one of degree of risk. It differs from gambling, which is based on random outcomes.[4] There is nothing in the act of speculating or investing that suggests holding times have anything to do with the difference in the degree of risk separating speculation from investing.[citation needed]

The economic benefits of speculation 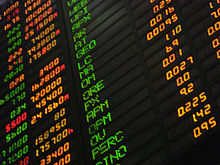 The speculator Victor Niederhoffer, in "The Speculator as Hero"[5] describes the benefits of speculation:

Let's consider some of the principles that explain the causes of shortages and surpluses and the role of speculators. When a harvest is too small to satisfy consumption at its normal rate, speculators come in, hoping to profit from the scarcity by buying. Their purchases raise the price, thereby checking consumption so that the smaller supply will last longer. Producers encouraged by the high price further lessen the shortage by growing or importing to reduce the shortage. On the other side, when the price is higher than the speculators think the facts warrant, they sell. This reduces prices, encouraging consumption and exports and helping to reduce the surplus.

Another service provided by speculators to a market is that by risking their own capital in the hope of profit, they add liquidity to the market and make it easier for others to offset risk, including those who may be classified as hedgers and arbitrageurs.

If a certain market—for example, pork bellies—had no speculators, then only producers (hog farmers) and consumers (butchers, etc.) would participate in that market. With fewer players in the market, there would be a larger spread between the current bid and ask price of pork bellies. Any new entrant in the market who wants to either buy or sell pork bellies would be forced to accept an illiquid market and market prices that have a large bid-ask spread or might even find it difficult to find a co-party to buy or sell to. A speculator (e.g., a pork dealer) may exploit the difference in the spread and, in competition with other speculators, reduce the spread. Some schools of thought argue that this creates an efficient market. But it is also true that, as more and more speculators participate in a market, real demand and supply can become diminishing small compared to supply and demand which is a result of speculation and thus prices become distorted and bubbles appear.

Speculators also sometimes perform a very important risk bearing role that is beneficial to society. For example, a farmer might be considering planting corn on some unused farmland. Alas, he might not want to do so because he is concerned that the price might fall too far by harvest time. By selling his crop in advance at a fixed price to a speculator, the farmer can hedge the price risk and is now willing to plant the corn. Thus, speculators can actually increase production through their willingness to take on risk.

Finding environmental and other risks

Hedge funds that do fundamental analysis "are far more likely than other investors to try to identify a firm’s off-balance-sheet exposures", including "environmental or social liabilities present in a market or company but not explicitly accounted for in traditional numeric valuation or mainstream investor analysis", and hence make the prices better reflect the true quality of operation of the firms.[6]

Shorting may act as a “canary in a coal mine” to stop unsustainable practices earlier and thus reduce damages and forming market bubbles.[6]

The economic disadvantages of speculation

Auctions are a method of squeezing out speculators from a transaction, but they may have their own perverse effects; see winner's curse. The winner's curse is however not very significant to markets with high liquidity for both buyers and sellers, as the auction for selling the product and the auction for buying the product occur simultaneously, and the two prices are separated only by a relatively small spread. This mechanism prevents the winner's curse phenomenon from causing mispricing to any degree greater than the spread.[citation needed]

Speculation can also cause prices to deviate from their intrinsic value if speculators trade on misinformation, or if they are just plain wrong. This creates a positive feedback loop in which prices rise dramatically above the underlying value or worth of the items. This is known as an economic bubble. Such a period of increasing speculative purchasing is typically followed by one of speculative selling in which the price falls significantly, in extreme cases this may lead to crashes.

In 1936 John Maynard Keynes wrote: "Speculators may do no harm as bubbles on a steady stream of enterprise. But the situation is serious when enterprise becomes the bubble on a whirlpool of speculation. (1936:159)"[7] Mr Keynes himself enjoyed speculation to the fullest, running an early precursor of a hedge fund. As the Bursar of the Cambridge University King's College, he managed two investment funds, one of which, called Chest Fund, invested not only in the then 'emerging' market US stocks, but also periodically included commodity futures and foreign currencies, albeit to a smaller extent (see Chua and Woodward, 1983) . His fund achieved positive returns in almost every year, averaging 13% p.a., even during the Great Depression, thanks to very modern investment strategies, which included inter-market diversification (i.e., invested not only in stocks but also commodities and currencies) as well as shorting, i.e., selling borrowed stocks or futures to make money on falling prices, which Keynes advocated among the principles of successful investment in his 1933 report ("a balanced investment position [...] and if possible, opposed risks.") [8]

According to Ziemba and Ziemba (2007), Keynes risk-taking reached 'cowboy' proportions, i.e. 80% of the maximum rationally justifiable levels (of the so called Kelly criterion), with overall return volatility approximately three times higher than the stock market index benchmark. Such levels of volatility, responsible for his spectacular investment performance, would be achievable today only through the most aggressive instruments (such as 3:1 leveraged exchange-traded funds). He chose modern speculation techniques practiced today by hedge funds, which are quite different from the simple buy-and-hold long-term investing.[9]

It is a controversial point whether the presence of speculators increases or decreases the short-term volatility in a market. Their provision of capital and information may help stabilize prices closer to their true values. On the other hand, crowd behavior and positive feedback loops in market participants may also increase volatility at times.

Some nations have moved to limit foreign ownership of cropland in order to ensure that food is available for local consumption while others have sold food land and depend on the World Food Programme.[10]

In May 2008, German leaders planned to propose a worldwide ban on oil trading by speculators, blaming the 2008 oil price rises on manipulation by hedge funds.[11]

On December 3, 2009, US Congressman Peter DeFazio stated, "The American taxpayers bailed out Wall Street during a crisis brought on by reckless speculation in the financial markets." He claimed a "financial transaction tax legislation will force Wall Street to do their part and put people displaced by that crisis back to work."[12]

On January 21, 2010, President Barack Obama endorsed the Volcker Rule which deals with speculative investments of banks that don't benefit their customers. The Volcker Rule states that these investments played a key role in the financial crisis of 2007–2010.[13]