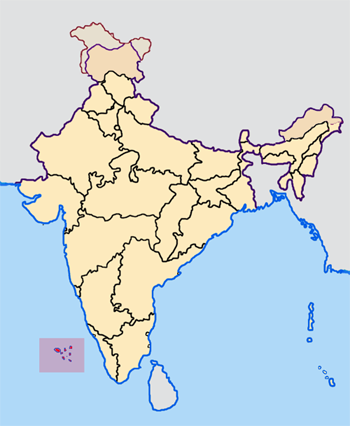 Lakshadweep (IPAudio|Lakshadweep.ogg|pronunciation; ( _ml. ലക്ഷദ്വീപ്) , [Unicode|Lakṣadvīp] ), the smallest of , is a group of islands 200 to 300 km off of the coast of in the . Their total land area is 11 sq mi or 28 . Eleven of the islands are inhabited. Lakshadweep is the northern part of the erstwhile .

The people of all the northern islands speak a dialect of Malayalam. According to local folk beliefs, they descended from traders who were washed up on the islands during a particularly heavy storm.However, the people of , the southernmost atoll, speak Mahl, a variant of , the language of the .

The islanders are ethnically similar to coastal Kerala's , and were influenced by traders. Inhabitants of Minicoy, the southernmost and largest island, closely resemble Maldivians. Most &mdash; 99% &mdash; of the indigenous population is Muslim; they were converted by Arab traders. The locals call themselves the "Div-i" or the "" ("from the mother island").

The first westerner in the recent historical past on the islands was , but the British were the first to explore the islands. They are also mentioned in great detail in the stories of the Arab traveller . The Portuguese established a fort on the islands in May 1498, but the inhabitants soon rose up and expelled them. The Amindivi group of islands (Amini, Kadmat, Kiltan, Chetlat and Bitra) came under the rule of in 1787. They passed on to British control after the and were attached to South Canara. The rest of the islands came under the of the Arakkal family of in return for a payment of annual tribute. After a while, the British took over the administration of those islands for non-payment of arrears. These islands were attached to the of the . In 1956, the separated these islands from the mainland administrative units, forming a new union territory by combining all the islands.

The union territory is administered by an Administrator appointed by India's central government. Lakshadweep is under the jurisdiction of the at . It also elects one member to the . The main languages spoken in Lakshadheep are and .

Lakshadweep's gross state domestic product for 2004 is estimated at $60 million at current prices. Due to its isolation and scenic appeal, Lakshadweep is emerging as a major tourist attraction for Indians. This brings in significant revenue, which is likely to increase. Since such a small region cannot support industries, the government is actively promoting tourism as a means of income.

Lakshadweep officially consists of 12 s, 3 s and 5 submerged banks, with a total of about 36 islands and islets. The reefs are in fact also atolls, although mostly submerged, with only small unvegetated sand cays above the high water mark. The submerged banks are sunken atolls.

Almost all the atolls have a northeast-southwest orientation with the islands lying on the eastern rim, and a mostly submerged reef on the western rim, enclosing a lagoon.

Two banks further north are not considered part of the group:
*
*

The atolls, reefs and banks are listed from north to south in the table:

The main islands are Kavaratti (where the capital city, Kavaratti, is located), Agatti, Minicoy, and Amini. The total population of the territory was 60,595 according to the 2001 census. Agatti has an airport where there are direct flights from Kochi, Kerala or Ernakulam (Cochin). Tourists need a [http://lakshadweep.nic.in/ permit] to visit the islands; foreign nationals are not permitted to visit certain islands. Consumption of liquor or alcoholic drink is not permitted in the islands except at Bangaram Island.

The name of the literally translates as "hundred thousand islands" ("laksha" = "one hundred thousand", "dweep" = "island"). Until 1973, the island group was known by the name Laccadives (compare to and ) although the term Laccadives strictly only applies to central Lakshdweep with the northern and Minicoy to the south considered separate. This is reflected in the pre-1973 name of the union territory, Laccadive, Minicoy, and Amindivi Islands (Malayalam: ലക്ഷദ്വീപ്, മിനിക്കോയ്, അമന്തീവ [Unicode|Lakṣhadvīp, Minikkoy, Amantīv] ). The Laccadive Islands plus Minicoy Island are known as the .

on Agatti Island is currently the only airport in Lakshadweep. , the state owned carrier, serves Agatti and flies to Kochi on the mainland. Also, from April 2007, a private carrier, Kingfisher Airlines, has commenced flights to and from Agatti. Kingfisher connects Kochi and Bangalore to Agatti. The other islands are linked by a or boat service.