A number of creole languages are based on the Spanish language.

Chavacano (also Chabacano) is a Spanish-based Creole language and the name of the Six Dialects of Spanish evolved words turned into a Creole language spoken in the Philippines. The name of the language stems from the Spanish word Chabacano which means "tasteless", "common", or "vulgar".[1] Dialects of Chavacano are spoken in Cavite City and Ternate (both in Luzon); Zamboanga, Cotabato and Davao (in Mindanao), Isabela City and other part of Province of Basilan and other places. According to a 2007 census, there are 2,502,185 speakers excluding outside the Philippines. It is the major language of Zamboanga City. Chavacano is also spoken in Cavite City and in parts of Ternate, Cavite and Sabah, Malaysia nearest to the Philippines, and even in Brunei and Latin America, because of recent migrations.

Most of the vocabulary comes from Spanish, while the grammar is mostly based on the Austronesian structure. It is used in primary education, television, and radio. Recently English words are infiltrating the language.

For more information see the article on Chavacano, or the Ethnologue Report on Chavacano.[2] 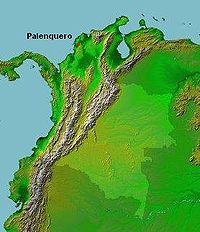 Palenquero (also Palenque) is a Spanish-based Creole spoken in Colombia.

The ethnic group which speaks this Creole consists only of 2,500 people, as of 1989.

It is spoken in Colombia, in the village of San Basilio de Palenque which is south and east of Cartagena, and in some neighborhoods of Barranquilla.

The village was formed by escaped slaves (Maroons) and Native Americans. Since many slaves had not been subjected to a lot of contact with white people, the palenqueros spoke Creole languages from Spanish language and their African ones.

Spanish speakers are unable to understand Palenquero. There are some influences from Kongo in Democratic Republic of Congo. As of 1998, 10% of the population of age under 25 years speaks Palenquero. Most common to the elderly.

For more information see the Ethnologue Report on Palenquero.[3]

The Annobonese language is spoken by 9,000 people on the islands of Ano Bom and Bioko, in Equatorial Guinea. It is locally called Falar de Ano Bom (Fá d'Ambô or even Fla d'Ambu). It is a Portuguese-based creole, similar to Forro, with some borrowings from Spanish. In fact, Fá d'Ambô is derived from Forro as it shares the same structure (82% of lexicon). In the 15th century, the island was uninhabited and discovered by Portugal but, by the 18th century, Portugal exchanged it and some other territories in Africa for Uruguay with Spain. Spain wanted to get territory in Africa, and Portugal wanted to enlarge even more the territory that they saw as the “New Portugal” (Brazil). Nevertheless, the populace of Ano Bom was against the shift and was hostile toward the Spaniards. This hostility, combined with the isolation of mainland Equatorial Guinea and the proximity of São Tomé and Príncipe — just 400 km from the island — has assured the maintenance of its identity.

Fá d'Ambô has gained some words of Spanish origin (10% of lexicon), but some words are dubious in origin because Spanish and Portuguese are closely related languages.

Nigerian Pidgin is a pidgin language spoken in Nigeria, based on English. The Spanish influence can be seen, as Spanish slave ships traded off the coast of Nigeria. One example is the Nigerian word "sabi", which means "to know", which comes from the Portuguese and Spanish words "saber", which have the same meaning.

Papiamento or Papiamentu is a creole language spoken by 359,000 people.

The Proto-Afro-Portuguese theory is the most widely accepted hypothesis about the genesis of Papiamentu.[4]

This Creole is reportedly becoming more similar to Spanish as the time passes due to extensive contact with the Hispanophone countries (particularly Venezuela), but it was originally Portuguese-based.[citation needed]

Because of the similarities between these Iberian languages, it is difficult to ascertain whether a certain feature is derived from Portuguese, Spanish or Ladino, after the adaptation to Papiamento rules.

For more information see the Ethnologue Report on Papiamentu.[5]

Pichinglis is spoken in the Bioko island, Equatorial Guinea. It originates in the arrival of Krio speakers from the mainland. Krio is an Creole that derives most of its vocabulary from English, but the Spanish colonization of Guinea exerted Spanish influence in lexicon and grammar.

For a discussion about the origins of Papiamentu, see "Papiamentu facts", an essay by Attila Narin.