The Romanian subdialects (subdialecte or graiuri) are the several varieties of the Romanian language, more specifically of its Daco-Romanian dialect. All linguists seem to agree on classifying the subdialects into two types, northern and southern, but further taxonomy is less clear, so that the number of subdialects varies between two and five, occasionally twenty. Most recent works seem to favor a number of three clear subdialects, corresponding to the regions of Wallachia, Moldavia, and Banat (all of which actually extend into Transylvania), and an additional group of varieties covering the remainder of Transylvania, two of which are more clearly distinguished, in Crișana and Maramureș, that is, a total of five.

The main criteria used in their classification are the phonetic features. Of less importance are the morphological, syntactical, and lexical particularities, as these are too small to provide clear distinctions.

All Romanian subdialects are mutually intelligible.

The term dialect is often avoided when speaking about the Daco-Romanian varieties, especially by Romanian linguists, for two main reasons. First, according to many linguists, the Romanian language (in the wider sense) is already divided into four dialects: Daco-Romanian, Aromanian, Megleno-Romanian, and Istro-Romanian; these, according to other linguists, are separate languages. The second reason is that, in Romanian, the term dialect is used in its narrow sense of large group of speech varieties that show considerable differences compared to the reference language (standard Romanian in this case), while other terms are used for smaller, more similar divisions. Unlike other Romance languages, all Daco-Romanian varieties are very similar to each other,[1][2] so that usually they are called subdialects.

Early dialectal studies of Romanian tended to divide the language according to administrative regions, which in turn were usually based on historical provinces. This led sometimes to divisions into three varieties, Wallachian, Moldavian, and Transylvanian,[3] or four, adding one for Banat.[4] Such classifications came to be made obsolete by the later, more rigorous studies, based on a more thorough knowledge of linguistic facts.

The publication of a linguistic atlas of Romanian by Gustav Weigand in 1908 and later, in the interwar period, of a series of dialectal atlases by a team of Romanian linguists,[5] containing detailed and systematic data gathered across the areas inhabited by Romanians, allowed researchers to elaborate more reliable dialectal descriptions of the language.

Only the most systematic phonetic features have been considered in dialectal classifications, such as the following.

For ease of presentation, some of the phonetic features above are described by taking the standard Romanian pronunciation as reference, even though in dialectal characterizations such a reference is not necessary and etymologically speaking the process might have had the opposite direction. A criterion such as "closing of word-final [ə] to [ɨ]" should be understood to mean that some Romanian subdialects have [ɨ] in word-final positions where others have [ə] (compare, for instance, Moldavian [ˈmamɨ] vs Wallachian [ˈmamə], both meaning "mother").

The most important phonetic process that helps in distinguishing the Romanian subdialects concerns the consonants pronounced in standard Romanian as the affricates [t͡ʃ] and [d͡ʒ]: 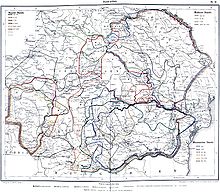 An early map representing a three-subdialect system, published by Gustav Weigand in 1908. The map shows the isoglosses corresponding to the pronunciation of a few words.

The Romanian subdialects have proven hard to classify and are highly debated. Various authors, considering various classification criteria, arrived at different classifications and divided the language into two to five subdialects, but occasionally as many as twenty:[7][8]