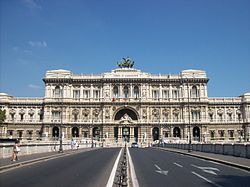 The Supreme Court of Cassation (Italian: Corte Suprema di Cassazione) is the major court of last resort in Italy. It has its seat in the Rome Hall of Justice.

The Court of Cassation exists also to “ensure the observation and the correct interpretation of law” by ensuring the same application of law in the inferior and appeal courts. In addition, it resolves disputes as to which lower court (i.e., penal, civil, administrative, military) has jurisdiction to hear a given case.

Decisions of the supreme court are binding only in the case submitted. The essential roles of the Court of Cassation are to ensure that lower courts have correctly followed legal procedure and to harmonise the interpretation of laws by lower courts through its interpretation. Even though its judgments are not binding outside the case decided, lower courts find those judgments persuasive.

The Court of Cassation is arranged into divisions (i.e., penal, civil, administrative and military). The court has one main president (The First President of the Court of Cassation), a deputy, and each division has its own president. Most cases are heard by a panel of five judges. In some cases (e.g., especially difficult matters of interpretation) nine judges hear the case. In addition, a public prosecutor must state his interpretation of the applicable law in every case submitted to the court to aid judges in reaching their decision.

The Court of Cassation was reorganized by royal decree number 12 on 30 January 1941, supplanting the previous court provided by the former Italian Civil Code in 1865. The need for this kind of court in Europe became apparent with the Ancien Régime's difficulties in maintaining both uniformity of interpretation and supremacy of the central laws against local privileges and rights. This kind of court first appeared during the French revolution. The original French court were initially much more like a legislative body than a judicial one. During his conquests, Napoleon greatly influenced Italian legal theory, and the Court of Cassation was formed using many imported French ideas.