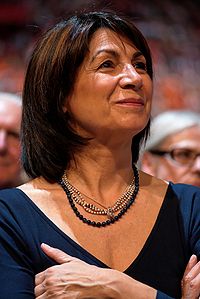 Claire Gibault at a rally for François Bayrou, centrist candidate in the 2007 French presidential election

Claire Gibault (born 31 October 1945 in Le Mans) is a French conductor and politician and a Member of the European Parliament for the south-east of France. She is a member of the Union for French Democracy, which is part of the Alliance of Liberals and Democrats for Europe, and sits on the European Parliament's Committee on Culture and Education and its Committee on Women's Rights and Gender Equality.

She is also a member of the delegation to the EU–Bulgaria Joint Parliamentary Committee and a substitute for the delegation for relations with Japan.

Since 2004 Claire Gibault has been an MEP, a member of the Committee on Culture and Education and of the Committee on Women's Rights and Gender Equality. She was rapporteure for a draft report on the social status of artists in Europe, approved by a large majority in June 2007.

Claire Gibault tries to defend modern feminism in order to give women the opportunity to have the same chances of success as men. This is what she is committed to within the European Parliament's Women's Rights Committee, on matters concerning women and poverty, the reconciliation of working life and family life or women migrants.

Born in Le Mans, that is where Claire Gibault began her studies. She won first prize for violin and chamber music at the Le Mans Conservatory before going to the Paris Higher National Conservatory of Music where she received first prizes for Orchestra Conducting, Harmony, Fugue and Counterpoint.

In 1995, she became the first woman to conduct the La Scala orchestra on the occasion of the creation of the Opera "La Station Thermale" by Fabio Vacchi and in 1997 she conducted the musicians of the Berlin Philharmonic Orchestra with the Opera "Jacob Lenz" by Wolfgang Rihm.

She was in charge of the Lyrical and Choral Workshop of the Opéra de Lyon between 1991 and 1998. There she was responsible for the musical direction of numerous productions, notably Pelléas et Mélisande, Il Barbiere di Siviglia, La Cenerentola, Die Entführung aus dem Serail, La Finta Giardiniera, Roméo et Juliette by Berlioz, Orfeo by Monteverdi, Les Brigands by Offenbach, L'Heure Espagnole and L'Enfant et les Sortilèges by Ravel, Haydn's Il Mondo della luna, Gluck's Iphigénie en Tauride, The Rape of Lucretia by Britten and Le Chapeau de paille d'Italie by Nina Rota, whilst La Station Thermale (recorded by Ricordi) and Les Oiseaux de Passage by Fabio Vacchi and Dédale by Hugues Dufourt (recorded on CD by MFA/Radio France) are among her world creations.

Between January 2000 and 2002, she was Music Director of Musica per Roma, where she created the Laboratorio Voci in Musica. Presented there with her conducting were Mozart's Cosi fan tutte and Die Entfurung aus dem Serail, Henze's Pollicino, Humperdinck's Hänsel und Gretel and Bernstein's West Side Story.

She was Claudio Abbado's assistant for Pelléas et Mélisande at the Royal Opera House, La Scala and the Vienna Opera House.

In November 2002, she made her debut at the Washington Opera, conducting Mozart's Idomeneo with Plácido Domingo in the title role.

In February 2003, she conducted a world creation of Fabio Vacchi at the Maggio Musicale Fiorentino and in March 2004 she conducted the Copenhagen Philharmonic for the first time.

In 2005, she adapted into French and conducted Henze's Pollicino at the Châtelet theatre.

During the same season, she conducted concerts with the Orchestra Mozart Bologna and the Sofia Philharmonic Orchestra, and recorded Fabio Vacchi's music for the film Gabrielle by Patrice Chéreau. In 2006, she conducted the New Year concert with the orchestra of the Antwerp Opera, in February the Luxembourg Philharmonic Orchestra, in March the Orchestra Mozart Bologna, in April the Savoie Orchestra, and in May the opera Peter Pan by Patrick Burgan at the Châtelet theatre.

Today, she is assistant orchestra conductor with Claudio Abbado for the new Orchestra Mozart Bologna

Claire Gibault has received the insignia of Officier of the Palmes académiques and is Chevalier of the Ordre national du mérite and of the Légion d'honneur. On 2 February 2005, she was given an honorary doctorate by the Catholic University of Louvain, along with Wim Wenders and Jorge Semprun.