A conductor conducting at a ceremony

A conductor's score and batons

Conducting is the art of directing a musical performance by way of visible gestures. The primary duties of the conductor are to unify performers, set the tempo, execute clear preparations and beats, and to listen critically and shape the sound of the ensemble. Orchestras, choirs, concert bands and other musical ensembles often have conductors.

An early form of conducting is cheironomy, the use of hand gestures to indicate melodic shape. This has been practiced at least as far back as the Middle Ages. In the Christian church, the person giving these symbols held a staff to signify his role, and it seems that as music became more rhythmically involved, the staff was moved up and down to indicate the beat, acting as an early form of baton.

In the 17th century, other devices to indicate the passing of time came into use. Rolled up sheets of paper, smaller sticks and unadorned hands are all shown in pictures from this period. The large staff was responsible for the death of Jean-Baptiste Lully, who injured his foot with one while conducting a Te Deum for the King's recovery from illness. The wound became gangrenous, and despite the efforts of doctors the gangrene spread to his leg and he died two months later.[1]

In instrumental music, a member of the ensemble usually acted as the conductor. This was sometimes the principal violinist, who could use his bow as a baton, or a lutenist who would move the neck of his instrument in time with the beat. It was common to conduct from the harpsichord in pieces that had a basso continuo part. In opera performances, there were sometimes two conductors - the keyboard player was in charge of the singers, and the principal violinist was in charge of the orchestra.

By the early 19th century, it became the norm to have a dedicated conductor, who did not also play an instrument during the performance. The size of the usual orchestra expanded during this period, and the use of a baton became more common, as it was easier to see than bare hands or rolled-up paper. Among the earliest notable conductors were Louis Spohr, Carl Maria von Weber, Louis Antoine Jullien and Felix Mendelssohn, all of whom were also composers. Mendelssohn is claimed to have been the first conductor to utilize a wooden baton to keep time,[citation needed] a practice still generally in use today. Amongst prominent conductors who did not or do not use a baton are Leopold Stokowski, Pierre Boulez, Dimitri Mitropoulos, Kurt Masur, Leonard Bernstein, Valery Gergiev, and Nikolaus Harnoncourt.[2] Hans von Bülow is sometimes considered the first professional musician whose principal career was as a conductor.

Hector Berlioz and Richard Wagner were also great conductors, and they wrote two of the earliest essays dedicated to the subject. Berlioz is considered the first virtuoso conductor. Wagner was largely responsible for shaping the conductor's role as one who imposes his own view of a piece onto the performance rather than one who is just responsible for ensuring entries are made at the right time and that there is a unified beat. 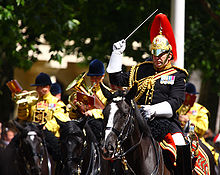 An officer conducting the mounted band of the British Household Cavalry.

Conducting is a means of communicating artistic directions to performers during a performance. Although there are many formal rules on how to conduct correctly, others are subjective, and a wide variety of different conducting styles exist depending upon the training and sophistication of the conductor. The primary responsibilities of the conductor are to unify performers, set the tempo, execute clear preparations and beats, and to listen critically and shape the sound of the ensemble. Communication is non-verbal during a performance, however in rehearsal frequent interruptions allow directions as to how the music should be played.

Conducting requires an understanding of the elements of musical expression (tempo, dynamics, articulation) and the ability to communicate them effectively to an ensemble. The ability to communicate nuances of phrasing and expression through gestures is also beneficial. Conducting gestures are preferably prepared beforehand by the conductor while studying the score, but may sometimes be spontaneous.

The grip of the baton varies from conductor to conductor. Despite a wide variety of styles, a number of standard conventions have developed.

The beat of the music is typically indicated with the conductor's right hand, with or without a baton. The hand traces a shape in the air in every bar (measure) depending on the time signature, indicating each beat with a change from downward to upward motion. The images show the most common beat patterns, as seen from the conductor's point of view.

The downbeat indicates the first beat of the bar, and the upbeat indicates the last beat of the bar. The instant at which the beat occurs is called the ictus (plural: ictus or ictuses), and is usually indicated by a sudden (though not necessarily large) click of the wrist or change in baton direction. In some instances, "ictus" is also used to refer to a horizontal plane in which all the ictuses are physically located, such as the top of a music stand where a baton is tapped at each ictus. The gesture leading up to the ictus is called the "preparation", and the continuous flow of steady beats is called the "takt".

If the tempo is slow or slowing, or if the time signature is compound, a conductor will sometimes indicate "subdivisions" of the beats. The conductor can do this by adding a smaller movement in the same direction as the movement for the beat that it belongs to.

Changes to the tempo are indicated by changing the speed of the beat. To carry out and to control a rallentando, a conductor may introduce beat subdivisions.

While some conductors use both hands to indicate the beat, with the left hand mirroring the right, formal education discourages such an approach. The second hand is therefore used for cueing the entrances of individual players or sections, and to aid indications of dynamics, phrasing, expression, and other elements.

Dynamics are indicated in various ways. The dynamic may be communicated by the size of the conducting movements, larger shapes representing louder sounds. Changes in dynamic may be signaled with the hand that is not being used to indicate the beat: an upward motion (usually palm-up) indicates a crescendo; a downward motion (usually palm-down) indicates a diminuendo. Changing the size of conducting movements frequently results in changes in the character of the music depending upon the circumstances.

Dynamics can be fine-tuned using various gestures: showing one's palm to the performers or leaning away from them may demonstrate a decrease in volume. To adjust the overall balance of the various instruments or voices, these signals can be combined or directed towards a particular section or performer.

The indication of entries, when a performer or section should begin playing (perhaps after a long period of silence), is called "cueing". A cue must forecast with certainty the exact moment of the coming ictus, so that all the players or singers affected by the cue can begin playing simultaneously. Cueing is achieved by engaging the players before their entry and executing a clear preparation, often directed towards the specific players. An inhalation, which may or may not be a semi-audible "sniff" from the conductor, is a common element in the cueing technique of many conductors. Mere eye contact or a look in the general direction of the players may be sufficient in many instances, as when more than one section of the ensemble enters at the same time. Larger musical events may warrant the use of a larger or more emphatic cue designed to encourage emotion and energy.

Phrasing may be indicated by wide overhead arcs or by a smooth hand motion either forwards or side-to-side. A held note is often indicated by a hand held flat with palm up. The end of a note, called a "cutoff" or "release", may be indicated by a circular motion, the closing of the palm, or the pinching of finger and thumb. A release is usually preceded by a preparation and concluded with a complete stillness.

Conductors aim to maintain eye contact with the ensemble as much as possible, encouraging eye contact in return and increasing the dialogue between players/singers and conductor. Facial expressions may also be important to demonstrate the character of the music or to encourage the players.