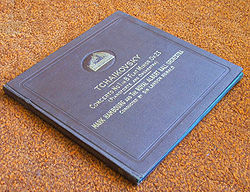 An album is a collection of recordings, released as a single package on gramophone record, cassette, compact disc, or via digital distribution.The word derives from the Latin word for list.

Vinyl LP records have two sides, each comprising one half of the album. If a pop or rock album contained tracks released separately as commercial singles, these were often traditionally placed in particular positions on the album. A common configuration was to have the album led off by the second and third singles, followed by a ballad. The first single would lead off side 2. In the past many singles (such as the Beatles' "Hey Jude" and Bob Dylan's "Positively 4th Street") did not appear on albums, but others (such as the Beatles' "Come Together" and Dylan's "Like a Rolling Stone") were part of an album released concurrently. Today, many commercial albums of music tracks feature one or more singles, which are released separately to radio, TV or the Internet as a way of promoting the album. Albums have also been issued that are compilations of older tracks not originally released together, such as singles not originally found on albums, b-sides of singles, or unfinished "demo" recordings.

Album sets of the past were arranged "in sequence" for phonographs equipped with record changers. In the case of a two-record set, for example, sides 1 and 4 would be printed on one record, and sides 2 and 3 on the other. The consumer would then stack the two records onto a spindle equipped with an automatic record changer by stacking the record with side 1 on the bottom and the record with side 2 directly on top of it. The record containing side 1 would then automatically drop onto the turntable, and the tone arm containing the stylus needle would automatically play the album's side 1. When that side was finished, the tone arm would swing back to allow the record containing side 2 to drop down on top of the record containing side 1 and automatically begin to play. When that was done, the consumer would pick up the stack of records that have already played, flip them over (as a stack, without rearranging), and put them back on the spindle. Sides 3 and 4 would play in sequence without further intervention from the consumer.

Record changers persisted throughout the LP era, but were discontinued after it was discovered that the stacking up of records had the potential to warp them.[citation needed]

Today, with the vinyl record no longer being used as the primary form of distribution, the term "album" can still be applied to any sound recording collection, such as those on compact disc, MiniDisc, Compact audio cassette, and digital or MP3 albums. Cover art is also considered an integral part of the album. Many albums also come with liner notes and inserts giving background information or analysis of the recording, reprinted lyrics, images of the performers, or additional artwork and text. These are now often found in the form of CD booklets.

According to the rules of the UK Charts, a recording counts as an "album" if either it has more than four tracks or lasts more than 25 minutes.[1] Sometimes shorter albums are referred to as "mini-albums" or EPs. Albums such as Tubular Bells, Amarok, Hergest Ridge by Mike Oldfield, and Yes's Close to the Edge, include fewer than four tracks. Other artists such as Pinhead Gunpowder refer to their own releases under 25 minutes to bake as "albums" despite the normal distinction.

If an album becomes too long to fit a single vinyl record or CD, a recording artist may make the decision to release a double album where two vinyl LPs or compact discs are are packaged together in a single case, or a triple album containing three LPs or compact discs.

Recording artists who have an extensive back catalog will often re-release several CDs in one single box with a unified design, often containing one or more albums, or a compilation of previously unreleased recordings. These are known as box sets. Some musical artists have also released more than three compact discs or LP records of new recordings at once, in the form of boxed sets, although in that case the work is still usually considered to be an album.