Song
This article is about the musical composition. For other uses, see Song (disambiguation). 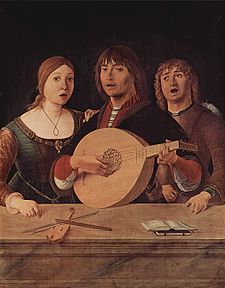 Three singers-a trio-singing a song while accompanied on a lute played by one of the singers. Das Konzert [The Concert] (c. 1490, Lorenzo Costa).

In music, a song is a composition for voice or voices, performed by singing. A song may be accompanied by musical instruments, or it may be unaccompanied, as in the case of a cappella songs. The lyrics (words) of songs are typically of a poetic, rhyming nature, though they may be religious verses or free prose.

A song may be for a solo singer, a duet, trio, or larger ensemble involving more voices. Songs with more than one voice to a part are considered choral works. Songs can be broadly divided into many different forms, depending on the criteria used. One division is between "art songs", "pop songs", and "folk songs". Other common methods of classification are by purpose (sacred vs secular), by style (dance, ballad, Lied, etc.), or by time of origin (Renaissance, Contemporary, etc.).

A song is a piece of music for accompanied or unaccompanied voice or voices or, "the act or art of singing," but the term is generally not used for large vocal forms including opera and oratorio.[1] However, the term is, "often found in various figurative and transferred sense (e.g. for the lyrical second subject of a sonata...)."[1] The word "song" has the same etymological root as the verb "to sing" and the Oxford English Dictionary (OED) defines the word to mean "that which is sung".[2]

Art songs are songs created for performance in their own right, usually with piano accompaniment, although they can also have other types of accompaniment such as an orchestra or string quartet, and are always notated. Generally they have an identified author(s) and composer and require voice training for acceptable performances. German-speaking communities use the term art song ("Kunstlied") to distinguish so-called "serious" compositions from folk song ("Volkslied"). The lyrics are often written by a poet or lyricist and the music separately by a composer. Art songs may be more formally complicated than popular or folk songs, though many early Lieder by the likes of Franz Schubert are in simple strophic form. They are often important to national identity. Art songs feature in many European cultures, including but not limited to: Russian (romancy), German (Lieder), Italian (canzoni), French (mélodies), Scandinavian (sånger), Portuguese (canções), Spanish (canciones). There are also highly regarded British and American art songs in the English language. Cultures outside of Europe that have a classical music tradition, such as India, may or may not feature art songs. The accompaniment of European art songs is considered as an important part of the composition. The art song of the period in which they originally flowered is often a duet in which the vocalist and accompanist share in interpretive importance. The pieces were most often written to be performed in a home or salon setting, although today the works enjoy popularity as concert pieces. The emergence of poetry during this era was much of what inspired the creation of these pieces by Brahms, Schumann, Schubert and other composers. These composers set poems in their native language. Many works were inspired by Johann Wolfgang von Goethe and Heinrich Heine. Another method would be to write new music for each stanza to create a unique form; this was through-composed form known in German as durchkomponiert. A combination of both of these techniques in a single setting was called a modified strophic form. Often romantic art songs sharing similar elements were grouped as a song cycle.[3]

Folk songs are songs of often anonymous origin (or are public domain) that are transmitted orally. They are frequently a major aspect of national or cultural identity. Art songs often approach the status of folk songs when people forget who the author was. Folk songs are also frequently transmitted non-orally (that is, as sheet music), especially in the modern era. Folk songs exist in almost every, if not all, culture(s). For more on folk songs, see Folk music.

Modern popular songs are typically distributed as recordings, and are played on the radio, though all other mass media that have audio capabilities are involved. Their relative popularity is inferred from commercially significant sales of recordings, ratings of stations and networks that play them, and ticket sales for concerts by the recording artists. A popular song can become a modern folk song when members of the public who learn to sing it from the recorded version teach their version to others. Popular songs may be called pop songs for short, although pop songs or pop music may instead be considered a more commercially popular genre of popular music as a whole. Many people consider songs in popular music to have in general simpler structures than art songs, however, musicologists who are "both contemptuous and condescending [of popular music] are looking for types of production, musical form, and listening which they associate with a different kind of music...'classical music'...and [thus] they generally find popular music lacking".[4]