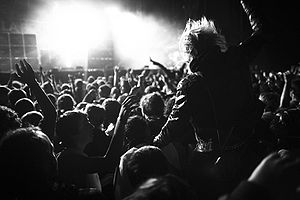 The French electro house band Justice in concert in 2007.

Popular music belongs to any of a number of musical genres "having wide appeal" [1] and is typically distributed to large audiences through the music industry. It stands in contrast to both art music [2][3][4] and traditional music, which are typically disseminated academically or orally to smaller, local audiences.[2][3][4] Although popular music sometimes is known as "pop music", the two terms are not interchangeable. Popular music is a generic term for music of all ages that appeals to popular tastes,[5] whereas pop music usually refers to a specific musical genre.

Musicologist and specialist in popular music Philip Tagg defined the notion in the light of sociocultural and economical aspects:

"Popular music, unlike art music, is (1) conceived for mass distribution to large and often socioculturally heterogeneous groups of listeners, (2) stored and distributed in non-written form, (3) only possible in an industrial monetary economy where it becomes a commodity and (4) in capitalist societies,subject to the laws of 'free' enterprise, according to which it should ideally sell as much as possible of as little as possible to as many as possible" [4]

For Richard Middleton and Peter Manuel, "a common approach to defining popular music is to link popularity with scale of activity", such as "sales of sheet music or recordings".[6] This approach has a problem, in that "repeat hearings are not counted, depth of response does not feature, socially diverse audiences are treated as one aggregated market and there is no differentiation between musical styles".[6] Another way to define popular music is "to link popularity with means of dissemination" (e.g., being aired on the radio); however, this is problematic, because "all sorts of music, from folk to avant garde, are subject to mass mediation".[6] A third approach to defining popular music is to based on "social group – either a mass audience or a particular class (most often, though not always) the working class", an approach which is problematic because social structures cannot simply be overlain onto musical styles. These three approaches are "too partial" and "too static". Moreover, "understandings of popular music have changed with time".[6]

Form in popular music is most often sectional, the most common sections being verse, chorus or refrain, and bridge. Other common forms include thirty-two-bar form, verse-chorus form, and the twelve bar blues. Popular music songs are rarely composed using different music for each stanza of the lyrics (songs composed in this fashion are said to be "through-composed").

The verse and chorus are considered the primary elements. Each verse usually has the same melody (possibly with some slight modifications), but the lyrics change for most verses. The chorus (or "refrain") usually has a melodic phrase and a key lyrical line which is repeated. Pop songs may have an introduction and coda ("tag"), but these elements are not essential to the identity of most songs. Pop songs that use verses and choruses often have a bridge, which, as its name suggests, is a section which connects the verse and chorus at one or more points in the song.

The verse and chorus are usually repeated throughout a song though the bridge, intro, and coda (also called an "outro") are usually only used once. Some pop songs may have a solo section, particularly in rock or blues-influenced pop. During the solo section one or more instruments play a melodic line which may be the melody used by the singer, or, in blues- or jazz-influenced pop, the solo may be improvised based on the chord progression. A solo usually features a single instrumental performer (e.g., a guitarist or a harmonica player) or less commonly, more than one instrumentalist (e.g., a trumpeter and a sax player).

Thirty-two-bar form uses four sections, most often eight measures long each (4×8=32), two verses or A sections, a contrasting B section (the bridge or "middle-eight") and a return of the verse in one last A section (AABA). Verse-chorus form or ABA form may be combined with AABA form, in compound AABA forms. Variations such as a1 and a2 can also be used. The repetition of one chord progression may mark off the only section in a simple verse form such as the twelve bar blues. 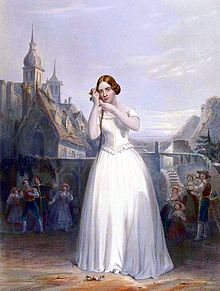 "The most significant feature of the emergent popular music industry of the late 18th and early 19th centuries was the extent of its focus on the commodity form of sheet music".[6] The availability of inexpensive, widely-available sheet music versions of popular songs and instrumental music pieces made it possible for music to be disseminated to a wide audience of amateur music-makers, who could play and sing popular music at home. In addition to the influence of sheet music, another factor was the increasing availability during the late 18th and early 19th century of public popular music performances in "pleasure gardens and dance halls, popular theatres and concert rooms".[6] The early popular music performers worked hand-in-hand with the sheet music industry to promote popular sheet music. One of the early popular music performers to attain widespread popularity was Jenny Lind, who toured the US in the mid-19th century. During the 19th century, more regular people began getting involved in music by participating in amateur choirs or joining brass bands.

The centre of the music publishing industry in the US during the late 19th century was in New York's 'Tin Pan Alley' district. The Tin Pan Alley music publishers developed a new method for promoting sheet music: incessant promotion of new songs. One of the technological innovations that helped to spread popular music around the turn of the century was player pianos; these allowed people to hear the new popular piano tunes.[6] By the early 1900s, the big trends in popular music were the increasing popularity of vaudeville theaters and dance halls and the new invention—the gramophone player. The record industry grew very rapidly; "By 1920 there were almost 80 record companies in Britain, and almost 200 in the USA".[6] Radio broadcasting of music, which began in the early 1920s, helped to spread popular songs to a huge audience. Another factor which helped to disseminate popular music was the introduction of "talking pictures"--sound films—in the late 1920s. In the late 1920s and throughout the 1930s, there was a move towards consolidation in the recording industry which led several major companies to dominate the record industry.[6]

In the 1950s and 1960s, television began to play an increasingly important role in disseminating new popular music. Variety shows regularly showcased popular singers and bands. In the 1960s, the development of new technologies in recording such as multitrack recorders gave sound engineers an increasingly important role in popular music. By using recording techniques, sound engineers could create new sounds and sound effects that were not possible using traditional "live" recording techniques.[6]

In the 1970s, the trend towards consolidation in the recording industry continued to the point that the "... dominance was in the hands of five huge transnational organizations, three American-owned (WEA, RCA, CBS) and two European-owned [companies] (EMI, Polygram)". In the 1990s, the consolidation trend took a new turn: inter-media consolidation. This trend saw music recording companies being consolidated with film, television, magazines, and other media companies, an approach which facilitated cross-marketing promotion between subsidiaries. For example, a record company's singing star could be cross-promoted by the firm's television and magazine arms.[6]

In the 1990s, popular music was changed by the "introduction of digital equipment (mixing desks, synthesizers, samplers, sequencers)" which allowed the creation of "new sound worlds" and facilitated DIY music production by amateur musicians and " tiny independent record labels".[6] By the 2000s, another trend which affected popular music was the increasing availability and use of computers and Internet connections, which facilitated the dissemination—both legal and illegal—of digital recordings and digital versions of sheet music and lyrics.