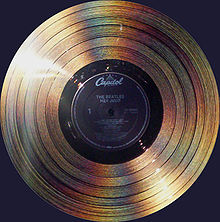 A gold record for The Beatles' "Hey Jude"

Almost all countries follow variations of the RIAA certification categories, which are named after precious materials:

The number of sales or shipments required for these awards varies depending on the population of the territory in which the recording is released. Normally they are awarded only to albums released at least nationally and are awarded individually for each country in which the album is sold. Additionally, widely different sales levels (perhaps 10 times lower) may exist for different music media, such as videos versus albums, singles, or downloads.

Originally applied to LP records, certification is now most commonly awarded for compact disc (CD) sales. Certification is usually awarded cumulatively, and it is possible for a single album to be certified Silver, Gold, and Platinum in turn. An album that becomes Platinum at least twice over is said to be "Multi-Platinum". Artists can also become Multi-Platinum sellers if they have at least two albums in the same territory both going single Platinum. A poor-selling record is often jokingly said to have "sold lead" (the heavy metal lead), in contrast to attaining high status as a Gold or Platinum album.

The original Gold record awards were presented to artists by their own record companies to publicize the achievement of 1,000,000 sales. The first of these was awarded by RCA to Glenn Miller in February 1942, celebrating 1,200,000 sales of "Chattanooga Choo Choo". Another example of a company award is the Gold record awarded to Elvis Presley in 1956 for 1,000,000 sales of the single "Don't Be Cruel." The first Gold record for an LP was awarded by RCA to Harry Belafonte in 1957 for the album Calypso (1956), the first album to sell over 1,000,000 copies. 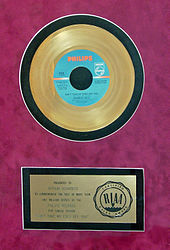 Gold record (for the sale of one million copies) presented to Artie Schroeck for his arrangement on "Can't Take My Eyes Off You", 1967

Several different thresholds have been in use at different times and places for both album and single awards. Some of these were based on units sold and others on the value of retail sales. The first official designation of a "Gold record" by the RIAA was established for singles in 1958, and the RIAA also trademarked the term "Gold record" in the United States. On March 14, 1958 the RIAA certified Perry Como's hit single "Catch a Falling Star" as its first-ever gold record, and the Oklahoma! soundtrack was certified as the first Gold album four months later. In 1976, RIAA introduced the Platinum certification, first awarded to Johnnie Taylor's "Disco Lady" (single) and the Eagles' Their Greatest Hits (1971–1975) (album).[1]

Like many record industry awards and rankings, the measurement is usually based on wholesale shipments to all types of retail outlets, not actual retail sales or financial transactions. This means that an early award or ranking for a new release reflects a distributor's expectations for the album and their market power.

Certifications no longer apply solely to physical media, and are now bestowed upon songs used in different ways. In June 2006, the RIAA certified 84 songs as Gold winners for ringtone downloads, 40 as Platinum and 4 as Multi-Platinum.[2]

The International Federation of the Phonographic Industry (IFPI) awards the IFPI Platinum Europe Award for album sales over one million within Europe and (as of October 2009) the Middle East.[3] Multi-Platinum Europe Awards are presented for sales in subsequent multiples of a million. The award, which was inaugurated in 1996, is not restricted to European group artists. Time is not a factor for an album to reach Platinum.

The plaques themselves contain various items under the glass. Modern awards often use CDs instead of records. Most Gold and Platinum records are actually vinyl records which have been vacuum metallized and tinted, while trimmed and plated metal "masters", "mothers", or "stampers" (metal parts used for pressing records out of vinyl) were initially used. Rarely does the groove on the record match the actual recording being awarded. Individual plaque-makers produced their awards according to available materials and individual techniques employed by their graphic arts departments. The plaques, depending on size and elaborateness of design, cost anywhere between US$135 and $275, most often ordered and purchased by the record label that issued the original recording.