Musicology (Greek: μουσική mousikē = "music" and -λογία -logia (-logy) = "the study of", from λόγος logos = "word" or "reason") is the scholarly study of music. The word is used in narrow, broad and intermediate senses. In the narrow sense, musicology is confined to the music history of Western culture. In the intermediate sense, it includes all relevant cultures and a range of musical forms, styles, genres and traditions. In the broad sense, it includes all musically relevant disciplines and all manifestations of music in all cultures. The broad meaning corresponds most closely to the word's etymology, the entry on "musicology" in Grove's dictionary, the entry on "Musikwissenschaft" in Musik in Geschichte und Gegenwart, and the classic approach of Adler (1885).

In the broad definition, the parent disciplines of musicology include history; cultural studies and gender studies; philosophy, aesthetics and semiotics; ethnology and cultural anthropology; archeology and prehistory; psychology and sociology; physiology and neuroscience; acoustics and psychoacoustics; and computer/information sciences and mathematics. Musicology also has two central, practically oriented subdisciplines with no parent discipline: performance practice and research, and the theory, analysis and composition of music. The disciplinary neighbors of musicology address other forms of art, performance, ritual and communication, including the history and theory of the visual and plastic arts and of architecture; linguistics, literature and theater; religion and theology; and sport. Musical knowledge and know-how are applied in medicine, education and music therapy, which may be regarded as the parent disciplines of Applied Musicology.

Music history or historical musicology studies the composition, performance, reception, and criticism of music over time. Historical studies of music are for example concerned with a composer's life and works, the developments of styles and genres (e. g. baroque concertos), the social function of music for a particular group of people (e. g. court music), or modes of performance at a particular place and time (e. g. Johann Sebastian Bach's choir in Leipzig). Like the comparable field of art history, different branches and schools of historical musicology emphasize different types of musical works and different approaches to music. There are also national differences in the definition of historical musicology. In theory, "music history" could refer to the study of the history of any type or genre of music (e.g., the history of Indian music or the history of rock). In practice, these research topics are more often considered within ethnomusicology (see below) and "historical musicology" is assumed to imply Western Art music.

The methods of historical musicology include source studies (esp. manuscript studies), paleography, philology (especially textual criticism), style criticism, historiography (the choice of historical method), musical analysis (the analysis of music in order to find "inner coherence"),[1] and iconography. The application of musical analysis to further these goals is often a part of music history, though pure analysis or the development of new tools of music analysis is more likely to be seen in the field of music theory. Music historians create a number of written products, ranging from journal articles describing their current research, new editions of musical works, biography of composers and other musicians, or book-length studies. Music historians may examine issues in a close focus, as in the case of scholars who examine the relationship between words and music for a given composer. On the other hand, some scholars take a broader view, and assess the place of a given type of music in society using techniques drawn from other fields, such as economics, sociology, or philosophy.

New musicology is a term applied since the late 1980s to a wide body of work emphasizing cultural study, analysis, and criticism of music. Such work may be based on feminist, gender studies, queer theory, or postcolonial theory, or the work of Theodor Adorno. Although New Musicology emerged from within historical musicology, the emphasis on cultural study within the Western art music tradition places New Musicology at the junction between historical, ethnological and sociological research in music.

New musicology was a reaction against traditional historical musicology, which according to Susan McClary, "fastidiously declares issues of musical signification off-limits to those engaged in legitimate scholarship." Charles Rosen, however, retorts that McClary "sets up, like so many of the 'new musicologists', a straw man to knock down, the dogma that music has no meaning, and no political or social significance".[2] (I doubt that anyone, except perhaps the nineteenth-century critic Hanslick, has ever really believed that, although some musicians have been goaded into proclaiming it by the sillier interpretations of music with which we are often assailed.)' (Rosen 2000).Today, many musicologists no longer distinguish between musicology and New Musicology, since many of the scholarly concerns that used to be associated New Musicology have now become mainstream, and the term "new" clearly no longer applies.

Ethnomusicology, formerly comparative musicology, is the study of music in its cultural context. It is often considered the anthropology or ethnography of music. Jeff Todd Titon has called it the study of "people making music". Although it is most often concerned with the study of non-Western musics, it also includes the study of Western music from an anthropological or sociological perspective, cultural studies and sociology as well as other disciplines in the social sciences and humanities. Though some ethnomusicologists primarily conduct historical studies, the majority are involved in long-term participant observation. Therefore, ethnomusiological work can be characterized as featuring a substantial, intensive ethnographic component. Closely related to ethnomusiology is the emerging branch of sociomusicology. 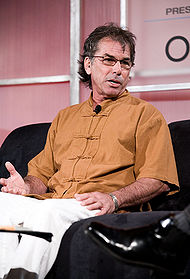 Mickey Hart (above, at the Web 2.0 conference in 2005) is a noted musicologist. Hart performed drumming and percussion for many years with the U.S. rock band the Grateful Dead as part of a dual drum set ensemble, along with Bill Kreutzmann.

Popular music studies, known, "misleadingly," (Moore 2003, p. 2) as popular musicology, emerged in the 1980s as an increasing number of musicologists, ethnomusicologists, and other varieties of historians of American and European culture began to write about popular musics past and present. The first journal focusing on popular music studies was Popular Music, which began publication in 1981. It was not until 1994 that an academic society solely devoted to the topic was formed, the International Association for the Study of Popular Music. The Association's founding was partly motivated by the interdisciplinary agenda of popular musicology though the group has been characterized by a polarized 'musicological' and 'sociological' approach also typical of popular musicology (Moore ibid, p. 4).

Music theory is a field of study that describes the elements of music and includes the development and application of methods for composing and for analyzing music through both notation and, on occasion, musical sound itself. Broadly, theory may include any statement, belief, or conception of or about music (Boretz, 1995). A person who studies or practices music theory is a music theorist.

Some music theorists attempt to explain the techniques composers use by establishing rules and patterns. Others model the experience of listening to or performing music. Though extremely diverse in their interests and commitments, many Western music theorists are united in their belief that the acts of composing, performing, and listening to music may be explicated to a high degree of detail (this, as opposed to a conception of musical expression as fundamentally ineffable except in musical sounds). Generally, works of music theory are both descriptive and prescriptive, attempting both to define practice and to influence later practice. Thus, music theory generally lags behind practice in important ways, but also points towards future exploration, composition, and performance.

Music psychology applies the content and methods of all subdisciplines of psychology (perception, cognition, motivation, personality and so on) to all aspects of musical behaviour and experience (performance, listening, composition). Music cognition is the study of music as information, from the viewpoint of cognitive science. Since it primarily addresses the processing of musical information by humans, it may be regarded as a subdiscipline of music psychology. The discipline shares the interdisciplinary nature of fields such as cognitive linguistics.

Performance practice draws on many of the tools of historical musicology to answer the specific question of how music was performed in various places at various times in the past. Although previously confined to early music, recent research in performance practice has embraced questions such as how the early history of recording affected the use of vibrato in classical music, or instruments in Klezmer.

Within the rubric of musicology, performance practice tends to emphasize the collection and synthesis of evidence about how music should be performed. The important other side, learning how to sing authentically or perform a historical instrument is usually part of conservatory or other performance training. However, many top researchers in performance practice are also excellent musicians.

Exclusion of disciplines and musics

In its most narrow definition, historical musicology is the music history of Western culture. Such a definition arbitrarily excludes disciplines other than history, cultures other than Western, and forms of music other than "classical" ("art", "serious", "high culture") or notated ("artificial"). A somewhat broader definition incorporating all musical humanities is still problematic, because it arbitrarily excludes the relevant (natural) sciences (acoustics, psychology, physiology, neurosciences, information and computer sciences, empirical sociology and aesthetics) as well as musical practice.

Within historical musicology, scholars have been reluctant to adopt postmodern and critical approaches that are common elsewhere in the humanities. According to Susan McClary (2000, p. 1285) the discipline of "music lags behind the other arts; it picks up ideas from other media just when they have become outmoded." Only in the 1990s did historical musicologists, preceded by feminist musicologists in the late 1980s, begin to address issues such as gender, sexualities, bodies, emotions, and subjectivities which dominated the humanities for twenty years before (ibid, p. 10). In McClary's words (1991, p. 5), "It almost seems that musicology managed miraculously to pass directly from pre- to postfeminism without ever having to change - or even examine - its ways." Furthermore, in their discussion on musicology and rock music, Susan McClary and Robert Walser also address a key struggle within the discipline: how musicology has often "dismisse[d] questions of socio-musical interaction out of hand, that part of classical music's greatness is ascribed to its autonomy from society." (1988, p. 283). Since the 1990s, however, musicology has increasingly turned to socio-cultural methods.

According to Richard Middleton, the strongest criticism of (historical) musicology has been that it by and large ignores popular music. Though musicological study of popular music has vastly increased in quantity recently, Middleton's assertion in 1990—that most major "works of musicology, theoretical or historical, act as though popular music did not exist" -- holds true. Academic and conservatory training typically only peripherally addresses this broad spectrum of musics, and many (historical) musicologists who are "both contemptuous and condescending are looking for types of production, musical form, and listening which they associate with a different kind of music...'classical music'...and they generally find popular music lacking. He cites three main aspects of this problem (p.104-6). The terminology of historical musicology is "slanted by the needs and history of a particular music ('classical music')." He acknowledges that "there is a rich vocabulary for certain areas [harmony, tonality, certain part-writing and forms], important in musicology's typical corpus"; yet he points out that there is "an impoverished vocabulary for other areas [rhythm, pitch nuance and gradation, and timbre], which are less well developed" in Classical music. Middleton argues that a number of "terms are ideologically loaded" in that "they always involve selective, and often unconsciously formulated, conceptions of what music is."

Although many musicology journals are not available on-line, or are only available through pay-for-access portals, a sampling of peer reviewed journals in various subfields gives some idea of musicological writings:

The following musicology journals can be accessed on-line through JSTOR (requires subscription for full access). Many of them have their latest issues available on-line via publisher portals (usually requiring a fee for access).