Demographics of the European Union

Demographics of the European Union 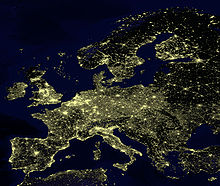 The population density of the EU is 114 people per km². 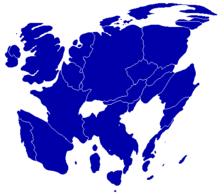 A cartogram depicting population distribution within the European Union at the member state level. Note how roughly half of all citizens within the EU live within the 4 largest member states: Germany, France, UK, and Italy. 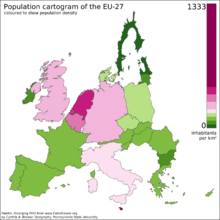 A cartogram of population density.

The demographics of the European Union show a highly populated, culturally diverse union of 27 member states. As of 1 January 2011, the population of the EU is about 502.52 million people.[1] Many countries are expected to experience a decline in population over the coming decades,[2] though this could be offset with new countries planning to join the EU within the next 20 years.

The European union has a significant number of global cities. It contains 13 of the 60 cities which compose the 2008 Global Cities Index,[4] as well as 16 of the 41 "alpha" global cities classified by GaWC (including London, Paris, Milan, Amsterdam and Brussels among others).[5] The following is a list of the ten most populous cities, urban areas and urban zones in the European Union, with their population according to 2005 estimates.[citation needed]

There is substantial movement of people within the Union i.e. internal migration; this occurs in strong patterns:

The British emigration towards Southern Europe is of especial relevance. Citizens from the European Union make up a growing proportion of immigrants in Spain. They mainly come from countries like the UK and Germany, but the British case is of particular interest due to its magnitude. The British authorities estimate that the real population of UK citizens living in Spain is much bigger than Spanish official figures suggest, establishing them at about 1,000,000 and about 800,000 being permanent residents.[6][7][8][9][10][11][12]

In fact, according to the Financial Times, in 2007 Spain was the most favoured destination for West Europeans considering to move from their own country and seek jobs elsewhere in the EU.[13]

Further information: Immigration to Europe and Emigration from Europe

There are currently more people immigrating into the European Union than there are emigrating from it. Immigration is a controversial issue in many member states such as Belgium, Sweden, Germany, Italy, the Netherlands, Spain, and the UK.[citation needed] In 2010, 47.3 million people lived in the EU, who were born outside their resident country. This corresponds to 9.4% of the total EU population. Of these, 31.4 million (6.3%) were born outside the EU and 16.0 million (3.2%) were born in another EU member state. The largest absolute numbers of people born outside the EU were in Germany (6.4 million), France (5.1 million), the United Kingdom (4.7 million), Spain (4.1 million), Italy (3.2 million), and the Netherlands (1.4 million).[14]

Spain in particular receives most of the immigrants coming illegally to Europe from Africa, probably due to its large coastal area and its proximity and land borders to Morocco at Ceuta and Melilla; African immigrants try to enter the country by boat from Morocco or Senegal or by jumping the border fences. During the first weekend of September 2006, more than 1,300 illegal immigrants arrived on beaches in the Canary Islands[15] and estimations are that between 50,000 and 70,000 people enter the European Union illegally through Spanish borders or beaches. Border fences have been built at both the Ceuta and Melilla borders in an attempt to stop illegal entrance to the country. Illegal immigration is an issue in Spanish politics, and also a big human rights problem, since many people die during the journey. Spain has been Europe's largest absorber of migrants for the past six years, with its immigrant population increasing fourfold as 2.8 million people have arrived, mostly from Latin America. Spectacular growth in Spain's immigrant population came as the country's economy created more than half of all the new jobs in the European Union between 2001 and 2006.[16]

In other countries, such as Ireland or Portugal, immigration is not seen as such a big issue, probably due to those countries' history of emigration. Spain also has past history of emigration too, especially in the 1960s during Franco's dictatorship, but the fact that it receives the most immigrants in all of the EU has made the problem grow more important in political debate.

The net migration rate for the EU in 2008 was 3,1 per 1000 inhabitants.[17] This figure is for migration into and out of the European Union, and therefore excludes any internal movements between member states. Net migration has remained at an annual level of between 1.5 and 2 million since 2003.[17]

The EU has significant religious diversity, mirroring its diverse history and culture. The largest religious group professes Christianity, predominantly Roman Catholicism, Protestantism and Eastern Orthodoxy. Several EU nations do not have Christian majorities for example (in the Czech Republic, Estonia, and The Netherlands, the majority has no religious affiliation).

Today, theism is losing prevalence in Europe in favour of atheism, and religion is losing prevalence in favour of secularism. European countries have experienced a decline in church attendance, as well as a decline in the number of people professing a belief in a god. The Eurobarometer Poll 2005 found that, on average, 52% of the citizens of EU member states state that they believe in a god, 27% believe there is some sort of spirit or Life Force while 18% do not believe there is any sort of spirit, god or Life Force, and 3% declined to answer.

A decrease in church membership and/ or church attendance in Europe (especially Belgium, Czech Republic, Finland, France, Germany, United Kingdom, Norway, the Netherlands and Sweden) has been noted, church attendance (percentagewise of the total population by country) in Northern and Western Europe is typically in the single digits.

The recent influx of immigrants to the affluent EU nations has brought in various religions of their native homelands, including Islam, Hinduism, Buddhism, Sikhism and Bahá'í Faith. Judaism has had a long history in Europe and has coexisted with the native populations for centuries, despite centuries of discrimination against Jewish people and several attendant periods of persecution or genocide by European rulers. Islam too has had a long history in Europe with Spain and Portugal at one time having a muslim majority.[18] As the Christian churches have historically wielded much power in Europe, reaction to this has allowed secularism to plant deep roots on European soil which has contributed to the rise in atheism and agnosticism.

After hitting a historical low of 1.47 children born per female, the total fertility rate of the EU started to increase again, to reach a level of 1.60 in 2008.[19] The positive trend was observed in all member states with the exception of Luxembourg, Malta and Portugal. The largest increases over this period were observed in Bulgaria (from 1.23 children per woman in 2003 to 1.57 in 2009), Slovenia (from 1.20 to 1.53), the Czech Republic (from 1.18 to 1.49) and Lithuania (from 1.26 to 1.55).[19] In 2009, the Member States with the highest fertility rates were Ireland (2.07), France (2.00), the United Kingdom (1.96 in 2008) and Sweden (1.94), all approaching the replacement level of 2.1 children born per female.[19] The lowest rates were observed in Latvia (1.31), Hungary and Portugal (both 1.32) and Germany (1.36). The increasing fertility rate has also been accompanied by an upward trend in the natural increase of the population which is due to the moderate increase of the crude birth rate that reached 10.9 births per 1000 inhabitants in 2008, an increase of 0.3 compared with 2007. The increase was observed in all member countries except Germany. The EU crude death rate remained stable at 9.7 per 1000 inhabitants.[17] The relatively low fertility rate means retirement age workers are not entirely replaced by younger workers joining the workforce. The EU faces a potential future dominated by an ever-increasing population of retired citizens, without enough younger workers to fund (via taxes) retirement programs or other state welfare agendas.[20]

A low fertility rate, without supplement from immigration, also suggests a declining overall EU population,[21] which further suggests economic contraction or even a possible economic crisis.[22] Some media have noted the 'baby crisis' in the EU,[23] some governments have noted the problem,[24] and the UN and other multinational authorities continue to warn of a possible crisis.[25] At this point however such a decrease in the population of the EU is not observed as the overall natural growth remains positive and the EU continues to attract large numbers of immigrants. In 2010, a breakdown of the population by citizenship showed that there were 20.1 million foreign citizens living in the EU representing 4% of the population.[19]

There is no precise or universally accepted definition of the terms "ethnic group" or "nationality". In the context of European ethnography in particular, the terms ethnic group, people (without nation state), nationality, national minority, ethnic minority, linguistic community, linguistic group and linguistic minority are used as mostly synonymous, although preference may vary in usage with respect to the situation specific to the individual countries of Europe.[27]

The 15 largest ethnic groups in the European Union are[citation needed]:

These groups account for some 450 million or about 90% of European Union population. The remaining 10% is shared by various smaller ethnic groups including Flemings, Slovaks, Danes, Finns, Irish, Walloons, Lithuanians, Slovenes, Latvians, Estonians, Maltese, Frisians and Basques in France.

The demographics of the member states of the European Union: