Population 1960–2006. Number of inhabitants in thousands.

After World War II, Italy enjoyed a prolonged economic boom which caused a major rural exodus to the cities,[citation needed] and at the same time transformed the nation from a massive emigration country till the 1970, to a net immigrant-receiving country from the mid 1980s.[1] High fertility persisted until the 1970s, when it plunged below the replacement rates, so that as of 2008, one in five Italians was over 65 years old.[2] Despite this, thanks mainly to the massive immigration of the last two decades, in the first decade of the 21st century, Italy experienced a growth in the crude birth rate (especially in the northern regions) for the first time in many years.[3] The total fertility rate has also significantly grown in the past few years, thanks to rising births among both in foreign-born and Italian women, as it climbed from an all-time minimum of 1.18 children per woman in 1995 to 1.41 in 2008.[4]

See also: Metropolitan areas in Italy and List of cities in Italy by population

According to OECD,[5] The largest conurbations are:

Summary of vital statistics since 1900

The following statistics are drawn from B.R. Mitchell, United nations, and ISTAT.[6][7][8]

Italy became a country of mass emigration soon after national reunification in the late 19th century. Between 1898 and 1914, the peak years of Italian diaspora, approximately 750,000 Italians emigrated each year.[9] Italian communities once thrived in the former African colonies of Eritrea (nearly 100,000 at the beginning of World War II),[10] Somalia and Libya (150,000 Italians settled in Libya, constituting about 18% of the total population).[11] All of Libya's Italians were expelled from the North African country in 1970.[12]

At the start of 2010 there were 4,279,000 foreign nationals resident in Italy and registered with the authorities.[22] This amounted to 7.1% of the country’s population and represented a year-on-year increase of 388,000.[23] These figures include more than half a million children born in Italy to foreign nationals—second generation immigrants are becoming an important element in the demographic picture—but exclude foreign nationals who have subsequently acquired Italian nationality; this applied to 53,696 people in 2008.[24] They also exclude illegal immigrants, the so-called clandestini whose numbers are difficult to determine. In May 2008 The Boston Globe quoted an estimate of 670,000 for this group.[25]

Since the expansion of the European Union, the most recent wave of migration has been from surrounding European nations, particularly Eastern Europe, and increasingly Asia,[26] replacing North Africa as the major immigration area. Some 997,000 Romanians,[27] around 10 percent of them being Romanis,[28] are officially registered as living in Italy, replacing Albanians and Moroccans as the largest ethnic minority group.

As of 2009, the foreign born population origin of Italy was subdivided as follows: Europe (53.5%), Africa (22.3%), Asia (15.8%), the Americas (8.1%) and Oceania (0.06%). The distribution of foreign born population is largely uneven in Italy: 87.3% of immigrants live in the northern and central parts of the country (the most economically developed areas), while only 12.8% live in the southern half of the peninsula.

Italy's official language is Italian. Ethnologue has estimated that there are about 55 million speakers of the language in Italy and a further 6.7 million outside of the country.[30] However, between 120 and 150 million people use Italian as a second or cultural language, worldwide.[31]

Italian, adopted by the state after the unification of Italy, is based on the Florentine variety of Tuscan and is somewhat intermediate between the Italo-Dalmatian languages and the Gallo-Romance languages. Its development was also influenced by the Germanic languages of the post-Roman invaders.

Italy has numerous dialects spoken all over the country. However, the establishment of a national education system has led to decrease in variation in the languages spoken across the country. Standardisation was further expanded in the 1950s and 1960s thanks to economic growth and the rise of mass media and television (the state broadcaster RAI helped set a standard Italian).

Several ethnic groups are legally recognized,[32] and a number of minority languages have co-official status alongside Italian in various parts of the country. French is co-official in the Valle d’Aosta—although in fact Franco-Provencal is more commonly spoken there. German has the same status in the province of South Tyrol as, in some parts of that province and in parts of the neighbouring Trentino, does Ladin. Slovene is officially recognised in the provinces of Trieste, Gorizia and Udine in Venezia Giulia.

In these regions official documents are bilingual (trilingual in Ladin communities), or available upon request in either Italian or the co-official language. Traffic signs are also multilingual, except in the Valle d’Aosta where—with the exception of Aosta itself which has retained its Latin form in Italian as in English—French toponyms are generally used, attempts to Italianise them during the Fascist period having been abandoned. Education is possible in minority languages where such schools are operating.

Roman Catholicism is by far the largest religion in the country, although the Catholic Church is no longer officially the state religion. Fully 87.8% of Italy's population identified themselves as Roman Catholic,[33] although only about one-third of these described themselves as active members (36.8%). 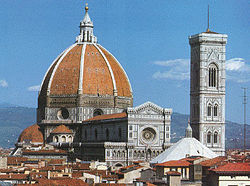 The Santa Maria del Fiore cathedral in Florence, which has the biggest brick dome in the world,[35][36] and is considered a masterpiece of Italian architecture.

The Italian Catholic Church is part of the global Roman Catholic Church, under the leadership of the Pope, curia in Rome, and the Conference of Italian Bishops. In addition to Italy, two other sovereign nations are included in Italian-based dioceses, San Marino and Vatican City. There are 225 dioceses in the Italian Catholic Church, see further in this article and in the article List of the Roman Catholic dioceses in Italy. Even though by law Vatican City is not part of Italy, it is in Rome, and along with Latin, Italian is the most spoken and second language of the Roman Curia.[37]

Italy has a rich Catholic culture, especially as numerous Catholic saints, martyrs and popes were Italian themselves. Roman Catholic art in Italy especially flourished during the Middle-Ages, Renaissance and Baroque periods, with numerous Italian artists, such as Michelangelo, Leonardo Da Vinci, Raphael, Caravaggio, Fra Angelico, Gian Lorenzo Bernini, Sandro Botticelli, Tintoretto, Titian, Raphael and Giotto. Roman Catholic architecture in Italy is equally as rich and impressive, with churches, basilicas and cathedrals such as St Peter's Basilica, Florence Cathedral and St Mark's Basilica. Roman Catholicism is the largest religion and denomination in Italy, with around 87.8% of Italians considering themselves Catholic. Italy is also home to the greatest number of cardinals in the world,[38] and is the country with the greatest number of Roman Catholic churches per capita.[39]

Even though the main Christian denomination in Italy is Roman Catholicism, there are some minorities of Protestant, Waldensian, Eastern Orthodox and other Christian churches.

In the 20th century, Jehovah's Witnesses, Pentecostalism, non-denominational Evangelicalism, and Mormonism were the fastest-growing Protestant churches. Immigration from Western, Central, and Eastern Africa at the beginning of the 21st century has increased the size of Baptist, Anglican, Pentecostal and Evangelical communities in Italy, while immigration from Eastern Europe has produced large Eastern Orthodox communities.

The longest-established religious faith in Italy is Judaism, Jews having been present in Ancient Rome before the birth of Christ. Italy has seen many influential Italian-Jews, such as Luigi Luzzatti, who took office in 1910, Ernesto Nathan served as mayor of Rome from 1907 to 1913 and Shabbethai Donnolo (died 982). During the Holocaust, Italy took in many Jewish refugees from Nazi Germany. However, with the creation of the Nazi-backed puppet Italian Social Republic, about 15% of Italy's Jews were killed, despite the Fascist government's refusal to deport Jews to Nazi death camps. This, together with the emigration that preceded and followed the Second World War, has left only a small community of around 45,000 Jews in Italy today.

Due to immigration from around the world, there has been an increase in non-Christian faiths. In 2009, there were 1.0 million Muslims in Italy[44] forming 1.6 percent of population although, only 50,000 hold Italian citizenship. Independent estimates put the Islamic population in Italy anywhere from 0.8 million[45] to 1.5 million.[46]

definition: age 15 and over can read and write
total population: 98.6%
male: 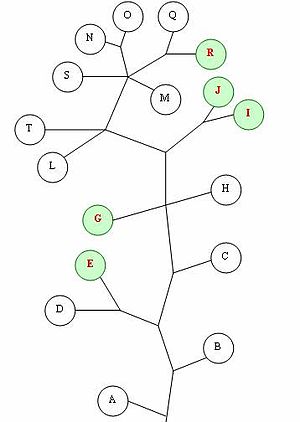 In a very recent and thorough study (2007) which analysed 699 Italian individuals from 12 different regions in continental Italy,[51] the most common Y-dna haplogroups observed were :