listen (help·info) (French: Aoste, Arpitan: Aoûta) is the principal city of the bilingual Aosta Valley in the Italian Alps, 110 km (68 mi) north-northwest of Turin. It is situated near the Italian entrance of the Mont Blanc Tunnel, at the confluence of the Buthier and the Dora Baltea, and at the junction of the Great and Little St. Bernard routes. Aosta is not the capital of the province, as these functions are shared by the region and the communes. 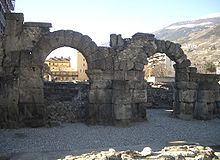 Arches of the Roman Theatre.

Aosta was settled in proto-historic times and later became a centre of the Salassi, many of whom were killed or sold into slavery by the Romans in 25 BC.[1] The campaign was led by Marcus Terentius Varro, who then founded the Roman colony of Augusta Praetoria Salassorum, housing 3,000 retired veterans. After 11 BC Aosta became the capital of the Alpes Graies ("Grey Alps") province of the Empire. Its position at the confluence of two rivers, at the end of the Great and the Little St Bernard Pass, gave it considerable military importance, and its layout was that of a Roman military camp.

After the fall of the Western Empire, the city was conquered, in turn, by the Burgundians, the Ostrogoths, the Byzantines. The Lombards, who had annexed it to their Italian kingdom, were expelled by the Frankish Empire under Pepin the Short. Under his son, Charlemagne, Aosta acquired importance as a post on the Via Francigena, leading from Aachen to Italy. After 888 AD it was part of the renewed Kingdom of Italy under Arduin of Ivrea and Berengar of Friuli.

Under the House of Savoy, Aosta was granted a special status that it maintained when the new Italian Republic was proclaimed in 1948. 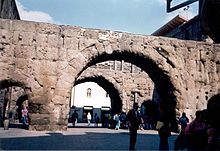 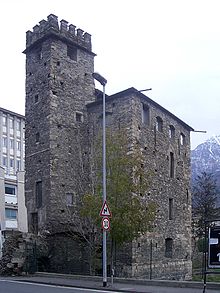 The ancient town walls of Augusta Praetoria Salassorum are still preserved almost in their entirety, enclosing a rectangle 725 by 571 m. They are 6.4 m high, built of concrete faced with small blocks of stone. At the bottom, the walls are nearly 2.75 m thick, and at the top 1.83 m.

Towers stand at angles to the enceinte and others are positioned at intervals, with two at each of the four gates, making twenty towers in total. They are roughly 6.5 m square, and project 4.3 m from the wall. Of the 20 original towers, the following are well preserved:

The east and south gates exist intact. The latter, a double gate with three arches flanked by two towers known as the Porta Praetoria (1st century AD) was the eastern gate to the city, and has preserved its original forms apart from the marble covering. It is formed by two series of arches enclosing a small square.

The rectangular arrangement of the streets is modeled on a Roman plan dividing the town into 64 blocks (insulae). The main road, c. 10 m wide, divides the city into two equal halves, running from east to west. This arrangement makes it clear that guarding the road was the main raison d'être of the city.

The Roman theatre, of which the southern façade remains today, 22 m tall. The structure, dating from the late reign of Augustus, occupied an area of 81 x 64 m: it could contain up to 4,000 spectators. In the nearby was the amphitheatre, built under Claudius. A marketplace surrounded by storehouses on three sides with a temple in the centre with two on the open (south) side, as well as a thermae, also have been discovered. 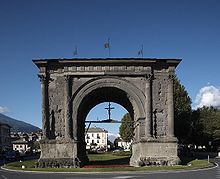 Outside the town is a triumphal arch in honour of Augustus, built in 35 BC to celebrate the victory of consul Varro Murena over the Salassi. About 8 km to the west is a single-arched Roman bridge, called the Pont d'Aël. It has a closed passage, lighted by windows for foot passengers in winter, and above it an open footpath, both being about 10 m in width.

There are considerable remains of the ancient road from Eporedia (modern Ivrea) to Augusta Praetoria into the Aosta Valley. The modern railway follows this route, notable for the Pont Saint-Martin, which has a single arch with a span of 35 m and a roadway 4.5 m wide; 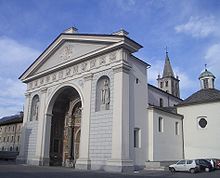 the cutting of Donnas; and the Roman bridges of Châtillon (Pont Saint-Vincent) and Aosta (Pont de Pierre).

Aosta railway station, opened in 1886, forms part of the Chivasso–Aosta railway, and is also a junction station for a branch line to nearby Pré-Saint-Didier, in the Valdigne, on the way towards Courmayeur.

Aosta Airport is a short distance to the east of the city.