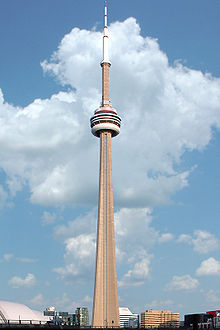 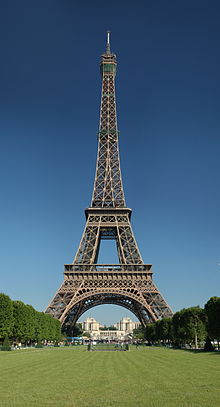 The Eiffel Tower in Paris, France. 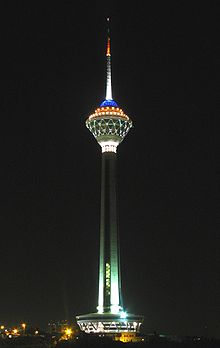 The Milad Tower in Tehran, Iran is the tallest concrete tower in the Middle East. 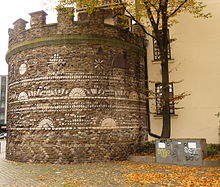 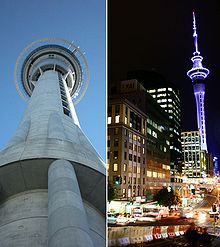 Sky Tower tower in Auckland, New Zealand is the tallest free-standing structure in the southern hemisphere and is part of the World Federation of Great Towers 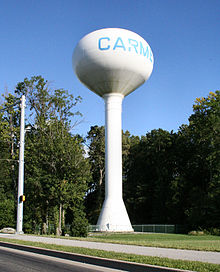 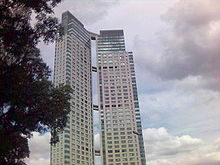 El Faro towers in Buenos Aires, Argentina, one of the tallest constructions in the city.

A tower is a tall structure, usually taller than it is wide, often by a significant margin. Towers are distinguished from masts by their lack of guy-wires.

Towers are generally built to take advantage of their height, and can stand alone on the ground, or as part of a larger structure or device such as a fortified building or as an integral part of a bridge, the term also denoting a raised structure on a ship or other vehicle.

Towers have been used by mankind since prehistoric times. The oldest known may be the circular stone tower in walls of Neolithic Jericho (8000 BC). Some of the earliest towers were ziggurats, which existed in Sumerian architecture since the 4th millennium BC. The most famous ziggurats include the Sumerian Ziggurat of Ur, built the 3rd millennium BC, and the Etemenanki, one of the most famous examples of Babylonian architecture. The latter was built in Babylon during the 2nd millennium BC and was considered the tallest tower of the ancient world.

Some of the earliest surviving examples are the broch structures in northern Scotland, which are conical towerhouses. These and other examples from Phoenician and Roman cultures emphasised the use of a tower in fortification and sentinel roles. For example, watchtower elements are found at Mogador from the first millennium BC, derived from Phoenician or Carthaginian origins. The Romans utilised octagonal towers[1] as elements of Diocletian's Palace in Croatia, which monument dates to approximately 300 AD, while the Servian Walls (4th century BC) and the Aurelian Walls (3rd century AD) featured square ones. The Chinese used towers as integrated elements of the Great Wall of China in 210 BC during the Qin Dynasty. Towers were also an important element of castles.

Another well known tower is the Leaning Tower of Pisa in Pisa, Italy built from 1173 until 1372. The Himalayan Towers are stone towers located chiefly in Tibet built approximately 14th to 15th century. [2]

Old English torr is from Latin turris via Old French tor. The Latin term together with Greek τύρσις was loaned from a pre-Indo-European Mediterranean language, connected with the Illyrian toponym Βου-δοργίς. With the Lydian toponyms Τύρρα, Τύρσα, it has been connected with the ethnonym Τυρρήνιοι as well as with Tusci (from *Turs-ci), the Greek and Latin names for the Etruscans (Kretschmer Glotta 22, 110ff.) It may also be of Sanskrit derivation, from the word Sthavara meaning an unmovable entity.

A sales tower, although different from a traditional tower, refers to an eye level structure most commonly in the shape of an L. ((Kyle Hunter))

Up to a certain height, a tower can be made with the supporting structure with parallel sides. However, above a certain height, the compressive load of the material is exceeded and the tower will fail. This can be avoided if the tower's support structure tapers up the building.

A second limit is that of buckling- the structure requires sufficient stiffness to avoid breaking under the loads it faces, especially those due to winds. Many very tall towers have their support structures at the periphery of the building, which greatly increases the overall stiffness.

A third limit is dynamic; a tower is subject to varying winds, vortex shedding, seismic disturbances etc. These are often dealt with a combination of simple strength and stiffness, as well as in some cases tuned mass dampers to damp out movements. Varying or tapering the outer aspect of the tower with height avoids vibrations due to vortex shedding occurring along the entire building simultaneously.

A modern type of tower, the skyscraper, uses less ground space as a ratio of total building interior square footage. Skyscrapers are often not classified as towers, although most have the same design and structure of towers. In the United Kingdom, tall domestic buildings are referred to as tower blocks. In the United States, the World Trade Center had the nickname the Twin Towers, a name shared with the Petronas Twin Towers in Kuala Lumpur. A tower's has very deep foundation's.

The tower throughout history has provided its users with an advantage in surveying defensive positions and obtaining a better view of the surrounding areas, including battlefields. They were installed on defensive walls, or rolled near a target (see siege tower). Today, strategic-use towers are still used at prisons, military camps, and defensive perimeters.

By using gravity to move objects or substances downward, a tower can be used to store items or liquids like a storage silo or a water tower, or aim an object into the earth such as a drilling tower. Ski-jump ramps use the same idea, and in the absence of a natural mountain slope or hill, can be human-made.

In history, simple towers like lighthouses, bell towers, clock towers, signal towers and minarets were used to communicate information over greater distances. In more recent years, radio masts and cell phone towers facilitate communication by expanding the range of the transmitter. The CN Tower in Toronto, Canada was built as a communications tower, with the capability to act as both a transmitter and repeater. Its design also incorporated features to make it a tourist attraction, including the world's highest observation deck at 147 stories.[citation needed]

Towers can also be used to support bridges, and can reach heights that rival some of the tallest buildings above-water. Their use is most prevalent in suspension bridges and cable-stayed bridges. The use of the pylon, a simple tower structure, has also helped to build railroad bridges, mass-transit systems, and harbors.

Control towers are used to give visibility to help direct aviation traffic.

The term "tower" is also sometimes used to refer to firefighting equipment with an extremely tall ladder designed for use in firefighting/rescue operations involving high-rise buildings. 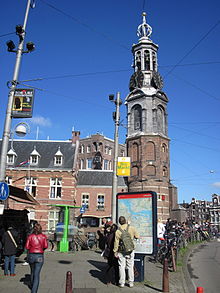 The Historic Munttoren in Amsterdam 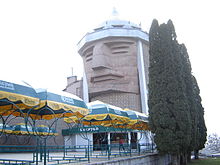 The Sosruko tower in Nalchik, Russia