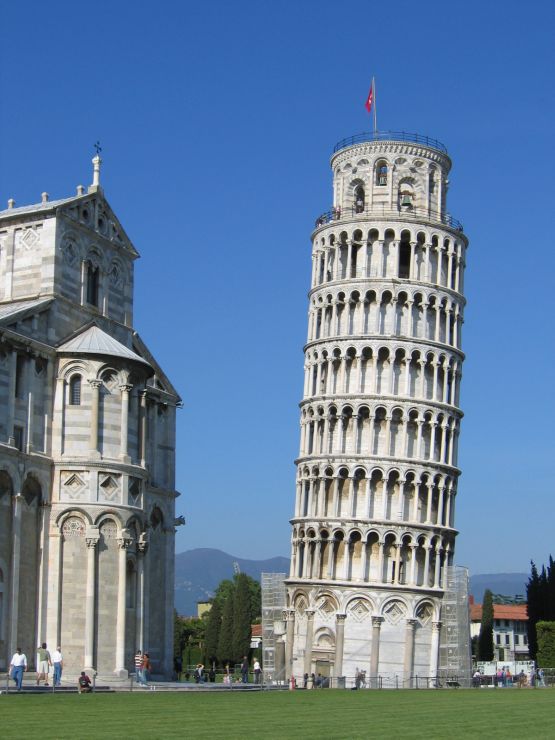 Although intended to stand vertically, the tower began leaning to the southeast soon after the onset of construction in 1173 due to a poorly laid foundation and loose substrate that has allowed the foundation to shift direction. The tower presently leans to the southwest.

The Tower of Pisa was a work of art, performed in three stages over a period of about 177 years. Construction of the first floor of the white marble campanile began on , , a period of military success and prosperity. This first floor is surrounded by pillars with classical capitals, leaning against blind arches.

The tower began to sink after construction progressed to the third floor in 1178. This was due to a mere three-meter foundation, set in weak, unstable . This means the design was flawed from the beginning. Construction was subsequently halted for almost a , because the s were almost continually engaged in s with , and . This allowed time for the underlying soil to settle. Otherwise, the tower would almost certainly have toppled. In 1198, clocks were temporarily installed on the third floor of the unfinished construction.

In 1272, construction resumed under , architect of the Camposanto. In an effort to compensate for the tilt, the engineers built higher floors with one side taller than the other. This made the tower begin to lean in the other direction. Because of this, the tower is actually curved.

The seventh floor was completed in 1319. The bell-chamber was not finally added until 1372. It was built by , who succeeded in harmonizing the Gothic elements of the bell-chamber with the Romanesque style of the tower. There are seven bells, one for each note of the musical scale. The largest one was installed in 1655.

After a phase (1990-2001) of structural strengthening, the tower is currently undergoing gradual surface restoration, in order to repair visual damage, mostly corrosion and blackening. These are particularly strong due to the tower's age and to its particular conditions with respect to wind and rain. [Restoration work is mentioned inside the official website of the square [http://piazza.opapisa.it/index_pdm.html] ]

* On , Donna Berta di Bernardo, a widow and resident of the house of dell'Opera di Santa Maria, bequeathed "sessanta soldi" or "sixty coins" to the "Opera Campanilis petrarum Sancte Marie". This money was to be used toward the purchase of a few stones which still form the base of the bell tower today. [Capitular Record Offices of Pisa, parchment n. 248]
* On , the foundations of the Tower were laid. [Stone in the basement of the Tower]
* Nearly four centuries later wrote : "Guglielmo, according to what is being said, in [this] year 1174 with Bonanno as sculptor, laid the foundations of the belltower of the cathedral in Pisa."
* Another possible builder is Gerardo di Gerardo. His name appears as a witness to the above legacy of Berta di Bernardo as "Master Gerardo", and as a worker whose name was Gerardo.
* A more probable builder is , because of the construction period and the structure's affinities with other buildings in Pisa. But he usually signed his works, and there is no signature by him in the belltower.
* Giovanni di Simone was heavily involved in the work of completing the tower, under the direction of , who at the time was master builder of the Opera di Santa Maria Maggiore. He could be the same Giovanni Pisano who completed the belfry tower.
* Giorgio Vasari indicates that Tommaso di Andrea Pisano was the designer of the belfry between 1360 and 1370.
* On the worker Benenato, son of Gerardo Bottici, oversaw the continuation of the construction of the belltower. [Public Record Offices of Pisa, Opera della Primaziale, 27 December 1234]
* On Guido Speziale, son of Giovanni, a worker on the cathedral Santa Maria Maggiore, was elected to oversee the building of the Tower. [Public Record Offices of Pisa, Opera della Primaziale, 23 February 1260]
* On the master builder Giovanni di Simone and 23 workers went to the mountains close to Pisa to cut marble. The cut stones were given to Rainaldo Speziale, worker of St. Francesco. [Public Record Offices of Pisa, Roncioni, 12 April 1265.]

There has been about the real identity of the of the Leaning Tower of Pisa. For many years, the design was attributed to Guglielmo and [ [http://www.endex.com/gf/buildings/ltpisa/ltpinfo/pisano.htm Controversy about the identity of the architect] ] , a well-known 12th-century resident of Pisa, famous for his casting, particularly in the Pisa Duomo. Bonanno Pisano left Pisa in 1185 for , , only to come back and die in his home town. His was discovered at the foot of the tower in 1820. However recent studies [Pierotti, Piero. (2001). "Deotisalvi - L'architetto pisano del secolo d'oro." Pisa: Pacini Editore.] seem to indicate as the original architect due to the time of construction and affinity with other Diotisalvi works, notably the bell tower of and the in Pisa. However, he usually signed his works and there is no signature by him in the bell tower which leads to further speculation.

is said to have dropped two cannon balls of different masses from the tower to demonstrate that their descending was independent of their . This is considered an apocryphal tale, and the only source for it comes from Galileo's secretary. [ [http://www.hindu.com/seta/2005/06/30/stories/2005063000351500.htm The Hindu : Sci Tech : Science history: setting the record straight ] ]

During , the discovered that the were using it as an observation post. A was briefly entrusted with the fate of the tower and his decision not to call in an strike saved the tower from destruction.

On , , the government of requested aid in preventing the tower from toppling. It was, however, considered important to retain the current tilt, due to the vital role that this element played in promoting the tourism industry of Pisa. [cite news
url=http://query.nytimes.com/gst/fullpage.html?res=9B0DE5DE153EF932A35752C1A961948260
publisher=The New York Times
title=Securing the Lean In Tower of Pisa
date=November 1, 1987] A multinational of engineers, s and s was assigned and met on the islands to discuss stabilization methods. It was found that the tilt was increasing in combination with the softer foundations on the lower side. Many methods were proposed to stabilize the tower, including the addition of 800 metric tons of lead counterweights to the raised end of the base.

In 1987, the tower was declared as part of the Piazza dei Miracoli along with the neighbouring , and cemetery.

On , after over two decades of work on the subject, the tower was closed to the public. While the tower was closed, the bells were removed to relieve some weight, and cables were cinched around the third level and anchored several hundred meters away. Apartments and houses in the path of the tower were vacated for safety. The final solution to prevent the collapse of the tower was to slightly straighten the tower to a safer angle, by removing Convert|38|m3|cuyd|0 of soil from underneath the raised end. The tower was straightened by 18 inches (45 centimetres), returning to the exact position that it occupied in 1838. After a decade of corrective reconstruction and stabilization efforts, the tower was reopened to the public on , , and has been declared stable for at least another 300 years.

In May 2008, after the removal of another convert|70|metric ton|short ton of earth, engineers announced that the Tower had been stabilized such that it had stopped moving for the first time in its history. They stated it would be stable for at least 200 years. [ [http://news.bbc.co.uk/2/hi/europe/7423957.stm BBC NEWS | Europe | Pisa's leaning tower 'stabilised' ] ]

A special note on the 5th bell: The name "Pasquareccia" comes from "Easter", because it used to ring on day. However, this bell is older than the bell-chamber itself, and comes from the tower Vergata in "Palazzo Pretorio" in Pisa, where it was called "La Giustizia" (The Justice). The bell was tolled to announce capital executions of criminals and traitors, including Count Ugolino in 1289

*
* , for other types of round towers.
* , a replica of the Tower of Pisa
* , a tilting medieval tower in
* - another leaning tower
* The Greyfriars Tower - the remains of a Franciscan monastery in . It is also leaning and is consequently nicknamed 'The Leaning Tower of Lynn' in reference to the Leaning Tower of Pisa.